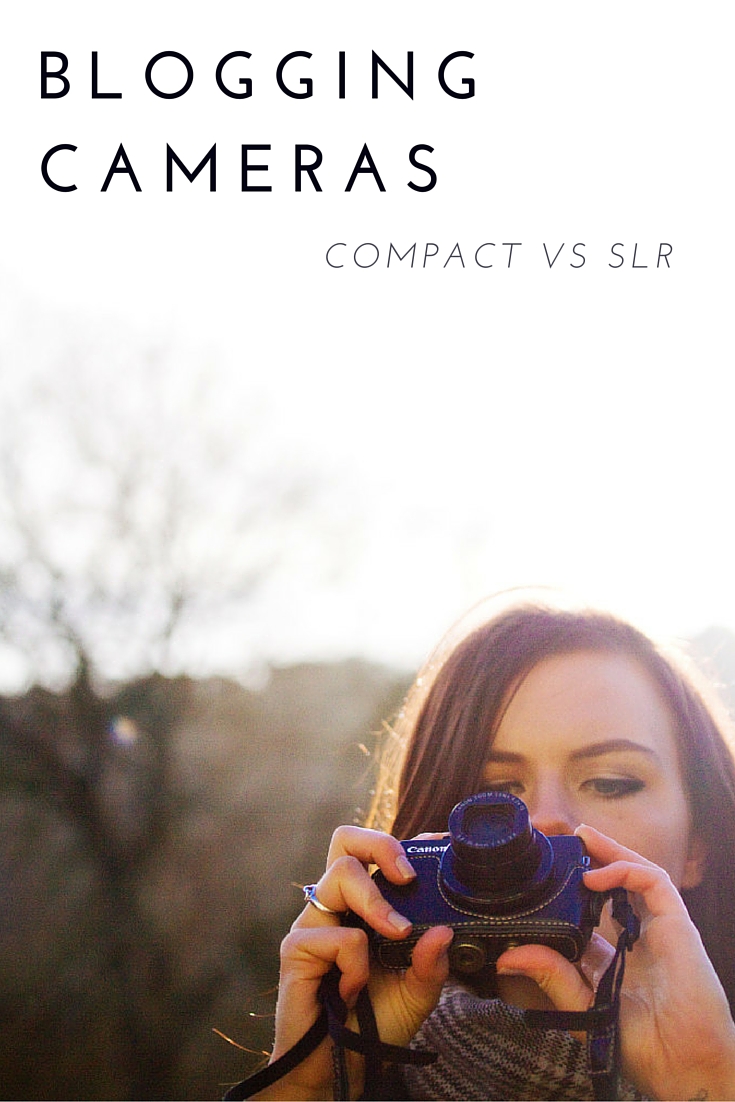 A couple of people have asked me for my take on cameras, so I thought I’d share all my thoughts here too!  Specifically my thoughts on compact cameras vs. SLRs and their relative merits for blogging.  I’m lucky enough to have access to both a Canon Powershot G7X and a Canon 7D, and can’t imagine going without either now, but there are definitely many occasions where one is far more suitable than the other.  Let’s assume that you’ve got a similar budget available for either, too.  Plenty of you might already own SLRs and think a compact camera is a step backwards, but hear me out!  All photos of the G7X taken on the 7D, and vice versa if that helps you decide. 🙂

Quality.  It goes without saying that the quality of new compact cameras is far better than you’d expect from something so tiny.  f1.8 helps. 🙂  It also seems to cope better in low light situations than an SLR.

Wifi.  Definitely one of the most useful features!  The wifi function on many compact cameras (G7x, Olympus Pen etc.) is super easy to use and very blogger-friendly. Being able to save photos to your phone immediately makes blogging life a whole lot easier than transferring through a laptop each time!  Previously my Instagram photos were either from an SLR, or from my far-from-perfect phone camera, so there was a pretty big difference between the two.  Now they’re almost all taken on my G7X so are much better quality, and the SLR photos I do post don’t look so out of place.

Flip screen.  Never has taking selfies or flatlays been easier!  Aside from those though, the flip screen has come in handy in loads of other ways.  Taking photos of food on a table for example – kinda difficult to focus at those low angles if you can’t see what you’re doing.  The SLR shot might have been great quality, but if you can’t physically be in the right position to take it, there’s no point.

Size.  Gone are the days when I only take my camera out if I’m planning a proper shoot!  This little one comes almost everywhere with me, because it can.  It’s easily handbag size, meaning I can now capture the moments I might have missed otherwise.  Recently I’ve been exploring more locally around Lancashire and Cumbria and found the small size has really helped with taking landscape shots too.  Nice not to have the weight of an SLR plus lenses to haul around.

Vlogging.  I’ve never even attempted vlogging with an SLR, but with this it’s the easiest thing ever.  So long as you remember to look at the lens, not the screen, which is actually easier said than done.  Loads of the ‘super vloggers’ use the G7X.  I know there isn’t much evidence of vlogs over on my YouTube just yet, but I have actually filmed a couple then just not got round to editing before they’ve become irrelevant!  Hopefully that’s soon to change though.

Camera Connect App.  This is one of the best functions of the G7X and usually works absolutely fine, but I’ve had problems with the app and had to reset things a few times (no idea why).  From what I’ve seen online, that’s not too uncommon.  Fixed with some rejigging and resetting though, eventually.

No interchangable lenses. – I know the Olympus Pen (the other compact camera super popular with bloggers) does have these, but the G7X doesn’t have the option to change lenses.  I guess it’d be even more flexible if it did. 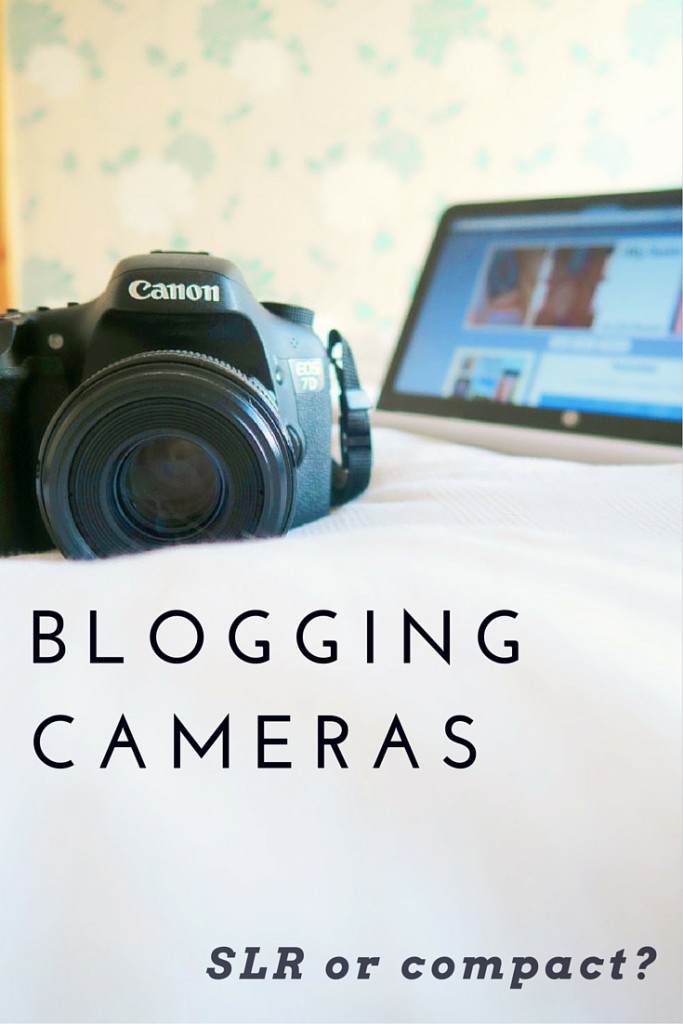 Superior quality.  You really can’t beat it!  Compact cameras are hot on the blurry background tails of SLRs, but there’s just no substitute yet.  For outfit photos and the like, I’d always go for an SLR if given the option.

Interchangable lenses.  This allows flexibility for the future should you wish to expand your collection and reap the full benefits of an SLR.

Video quality.  That soft glowy look that’s so flattering, especially for no-makup shots like in this video!

Larger size.  I realise this seems like a contradiction as I said smaller was a ‘pro’ for the G7X, but hear me out.  Small = great for practicality, but I sometimes actually find it more difficult to keep a steady hand when wielding a tiny camera.  The size and weight of the 7D makes it easier to take a steady, sharp shot.

More control.  For example we always use back button focusing, which enables you to focus on and meter from two separate points. 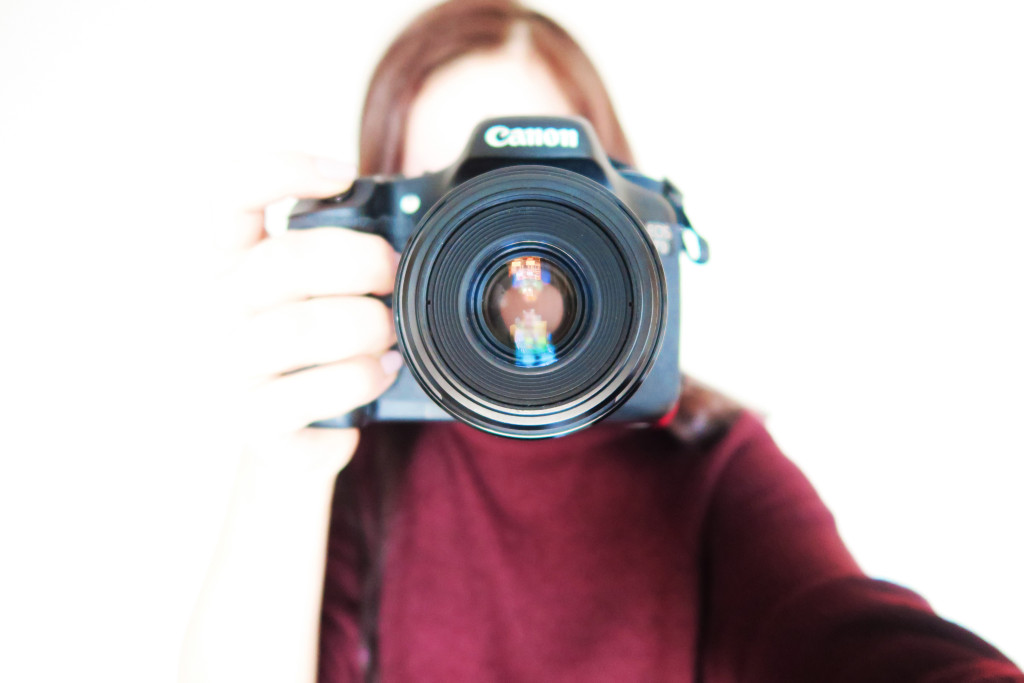 Time investment.  An SLR is only really worth it if you’re going to dedicate time to learning your way around it – an SLR on Auto isn’t likely to give you what you want at all, and certainly doesn’t get the most out of it.  We almost always shoot on full manual or aperture priority mode.  That said, once you know a few basics (which can be learnt easily from YouTube) then you’re good to get started.

File transfer.  Our 7D uses CF rather than SD cards which just aren’t as quick and easy.

No flip screen – some SLRs do have a flip screen, but the fact that the 7D doesn’t means we’ve had to get in some pretty awkward positions in the past!

Indiscreet.  Can’t take any sneaky shots at the dinner table with a cumbersome camera like this!  If you don’t want to make a show of the fact that you’re snapping everything, then probably best to steer clear of a bulky camera.

Difficulty focusing video.  I’ve found it really quite tricky to keep anything but a stationary clip focused, as it doesn’t track the same as the G7x.

Here’s the part where I’m one of those annoying people who says ‘there isn’t an answer’. 🙂  Entry level SLRs are a similar price to quality compact cameras, although there are many bloggers using just an iPhone who do a damn god job, too.  If you’re just getting started with blogging and/or photography, then I’d suggest sticking with a phone camera whilst you get a feel for your style before deciding which would be more suitable for you.  From there, I’d definitely recommend one of the new compact cameras like the Canon G7X for practicality and flexibility.  You won’t be limited in any way.  However, you’ll probably reach a point where your photos just aren’t quite as ‘special’ as you’d like, and the better quality from an SLR would 100% be worth the investment.  That said, all these cameras aren’t a substitute for practice and knowledge gained!