Why you NEED a Lisbon city break this summer 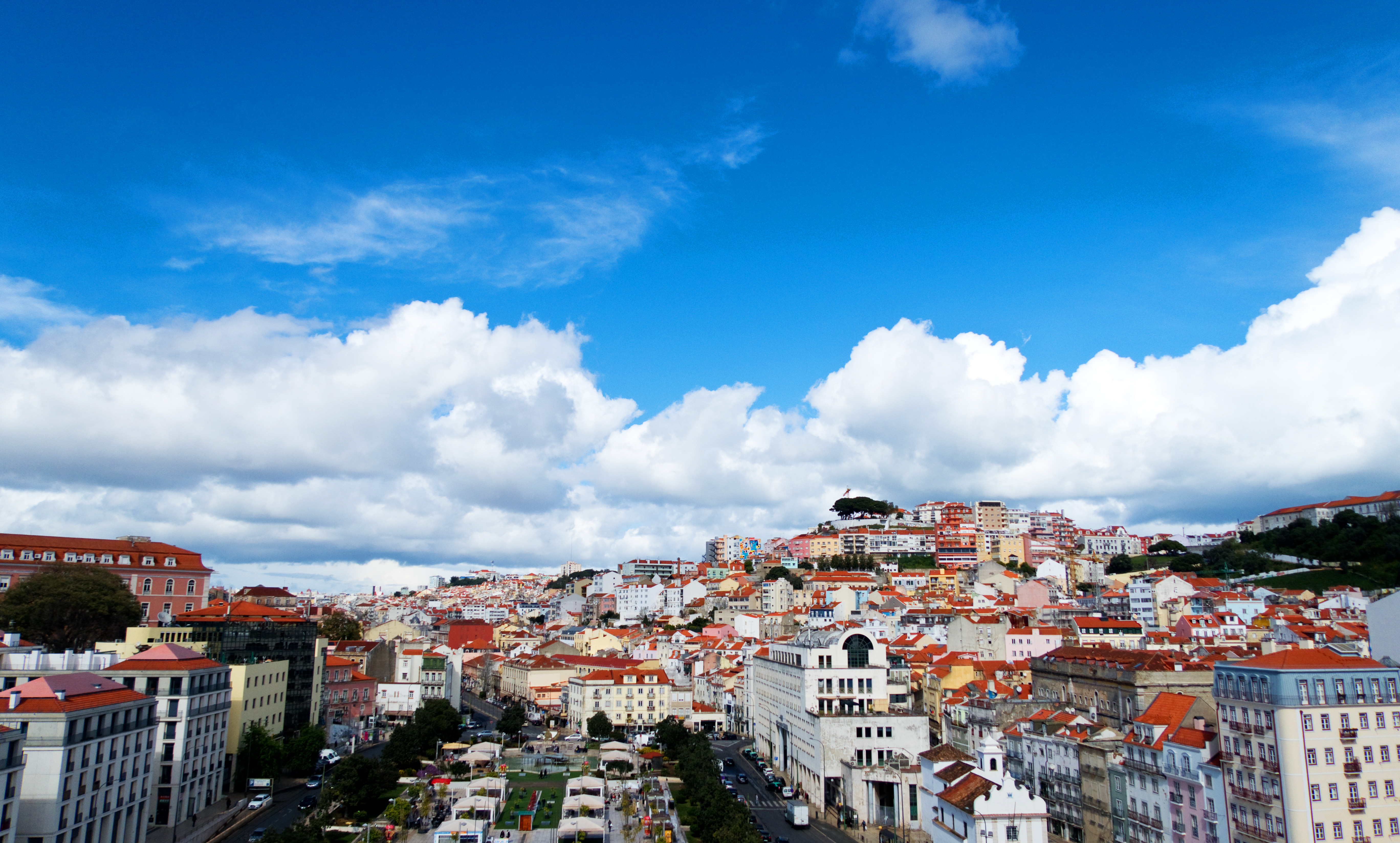 Oh Lisbon what a darling you were.  Pretty views, interesting streets, full of surprises and custard tarts.  There’s my Lisbon city break post in summary.

Seriously though, I can’t recommend Lisbon enough.  And that’s despite the fact that it rained for the majority of my trip.  There might have been a literal dampener on my trip but I didn’t let it turn into a metaphorical one!  Needless to say I made the most of the intermittent blue skies for photos. 🙂  I went solo for this trip and had a great time but can see it being perfect for a cute couples trip or getaway with your mates too.

For this one I thought I’d go for an ‘informative diary’ approach to my blog post, because in all honesty I didn’t really have a plan for my trip.  I had a Lisboa card and wanted to make the most of that, but wanted to just be spontaneous and open minded.  And I gotta say, it worked out pretty well!  The lovely cabin crew I chatted to on my Monarch flight out said it’s been a really popular destination for them, and I can definitely see why!  So, in chronological(ish) order, here’s what I got up to in Lisbon, why you absolutely 100% must add it to your city break list, and some helpful pointers. 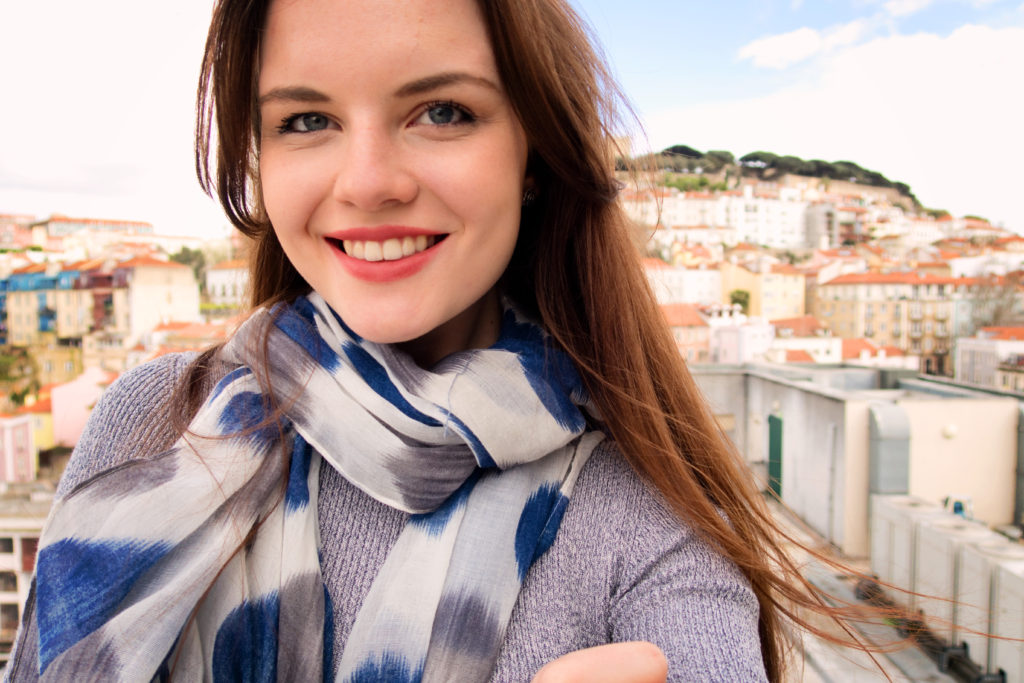 The airport journey is quick and easy

Let’s get the boring stuff out the way first!  For a short weekend trip you really don’t want to be wasting loads of time getting to and from the airport.  Precious exploring and pastry eating time that.  Lisbon airport is only 6 miles or so from the city centre, and the shuttle bus stops in several places rather than just at the central station.  Makes life much easier to just hop off at the stop nearest your hotel rather than faf about with changing metro lines.  A Lisboa Card entitles you to discounts on the Aerobus too.  (Handy Lisboa card is gonna be a running theme here!).

I couldn’t check into my hotel straight away, so dropped off my luggage and then headed out for a wander.  Which brings me to my next point… 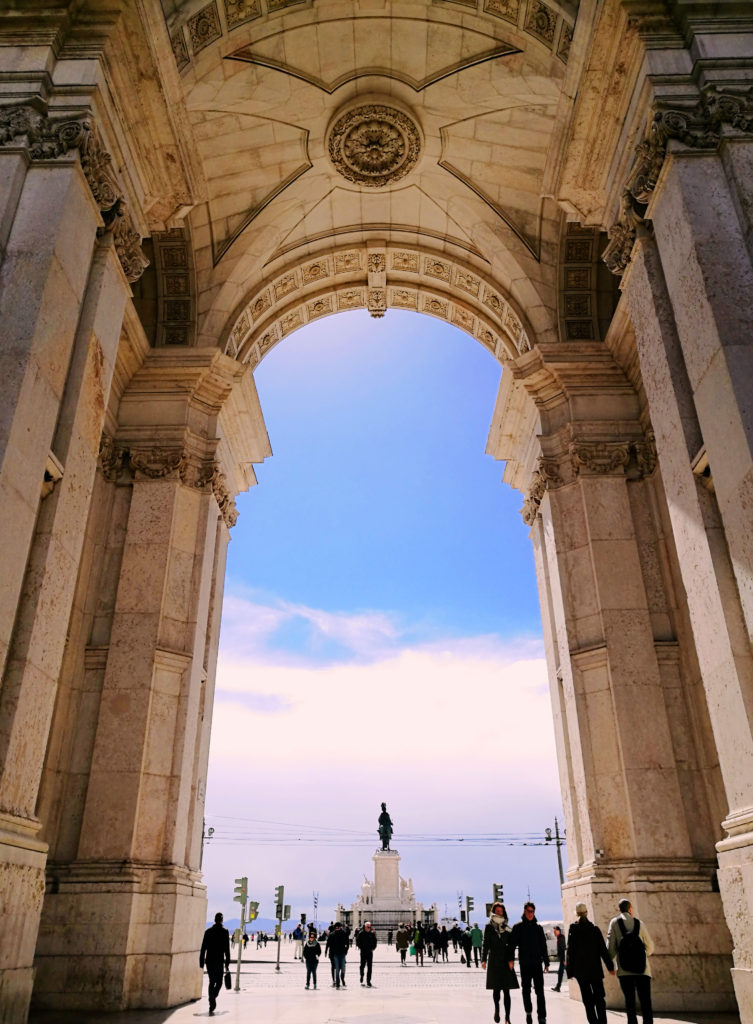 Not what you might think for a city renowned for it’s hills and winding streets, but hear me out!  I headed in a general downhill direction towards the river, took some quick snaps on my way, and just sat and chilled on Comercio Square for a while watching the world go by.  Of the cities I’ve been to, central Lisbon was probably the easiest to navigate so far.  Baixa is just a grid with obvious big landmarks like the Elevador de Santa Justa and the Rua de Augusta Arch, and you always know that heading downhill will just take you towards the river.  Easy! 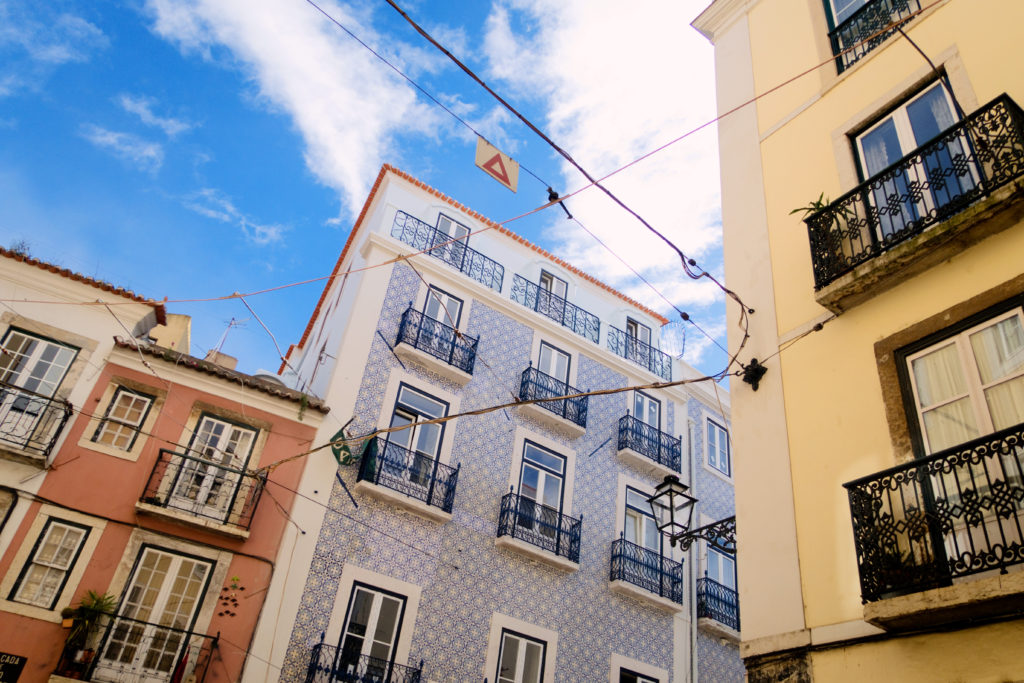 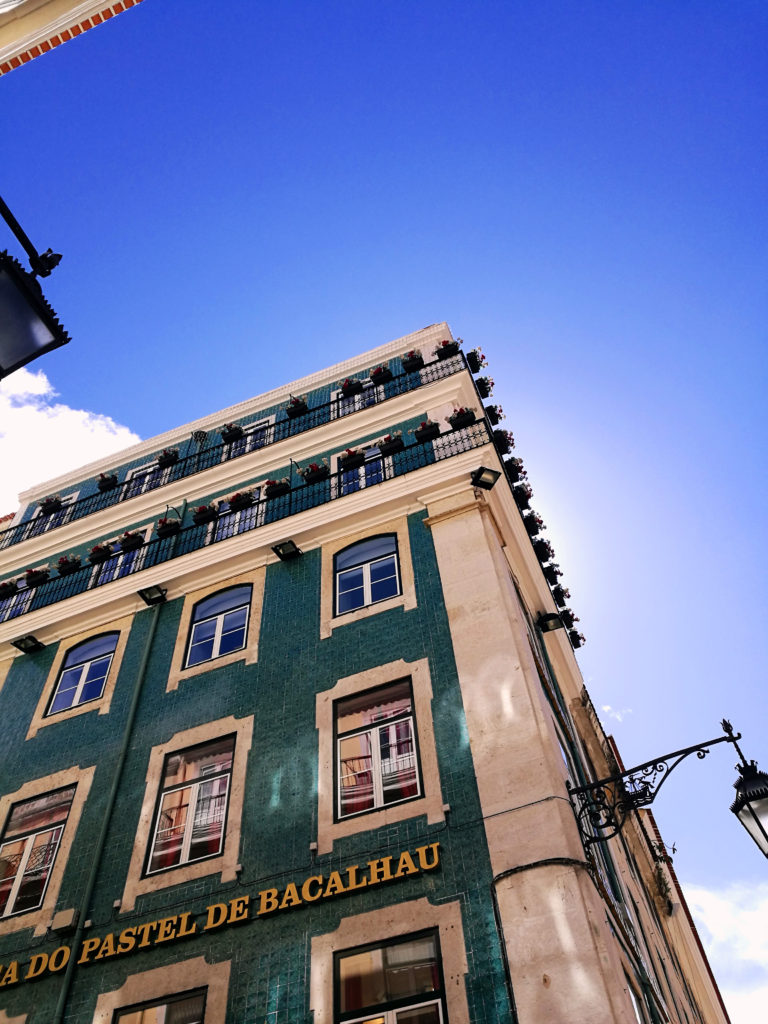 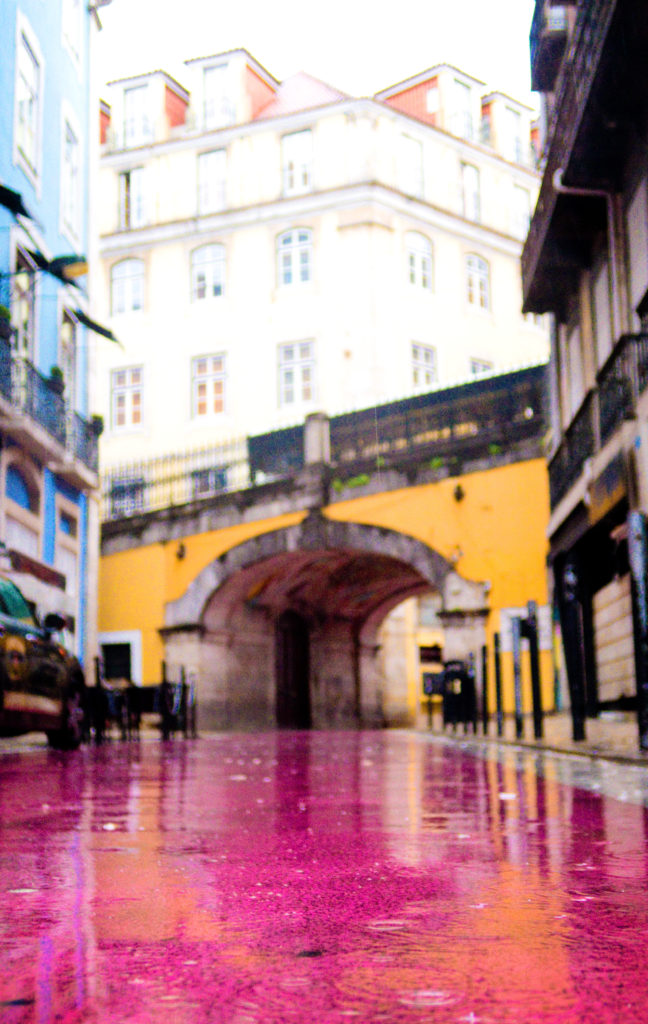 Because where else has a pink street, huh?  Lisbon you so colourful and lovely.  Along with all the obvious Zara and Mango, there are dozens of accessory shops.  Which is handy when you get caught in a thunderstorm and need to dive for cover in shops!  Purely to seek refuge from the rain, obviously. 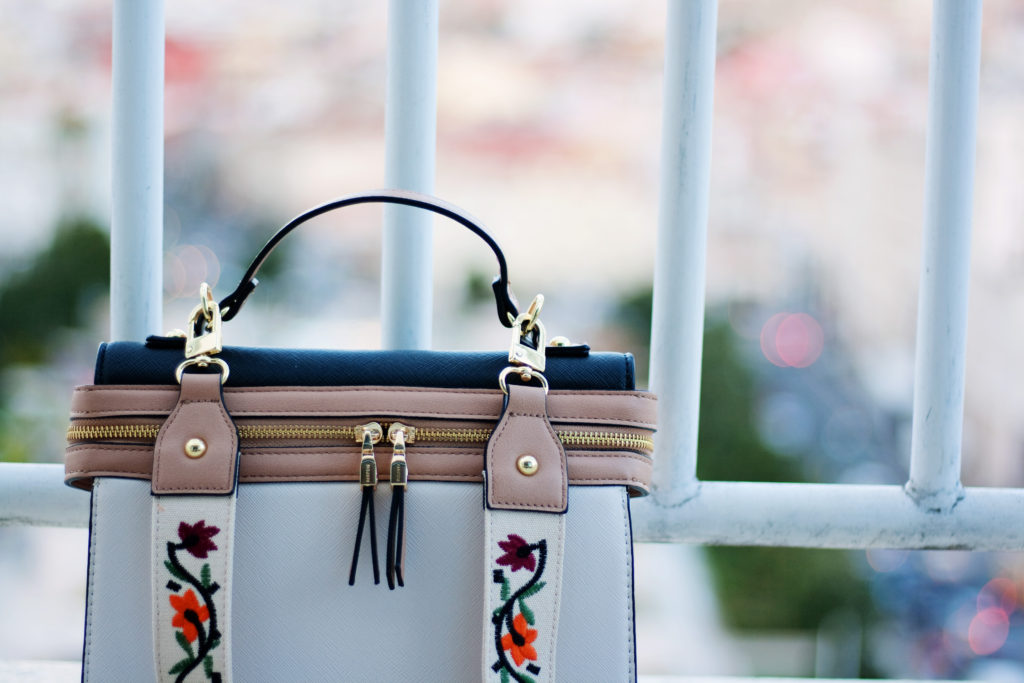 I’m including the Elevador de Santa Justa under ‘quirky things’ too – it’s a bit of novelty fun!  Again, entry is included with a Lisboa card.  You can whizz up the elevator, enjoy the views over Lisbon, then walk across the bridge to the higher streets and save yourself the climb. 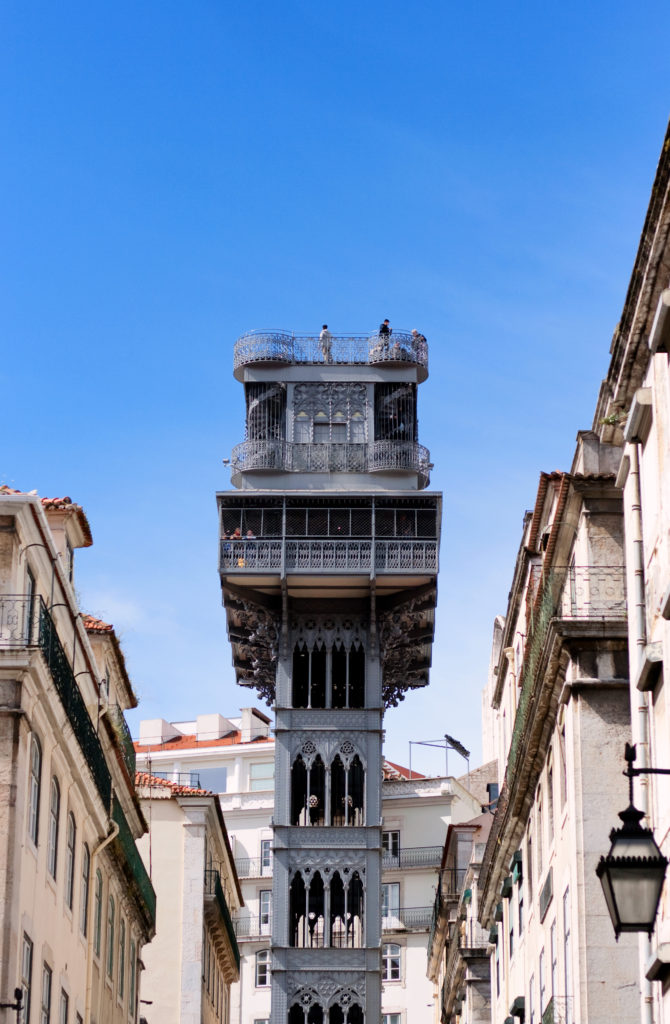 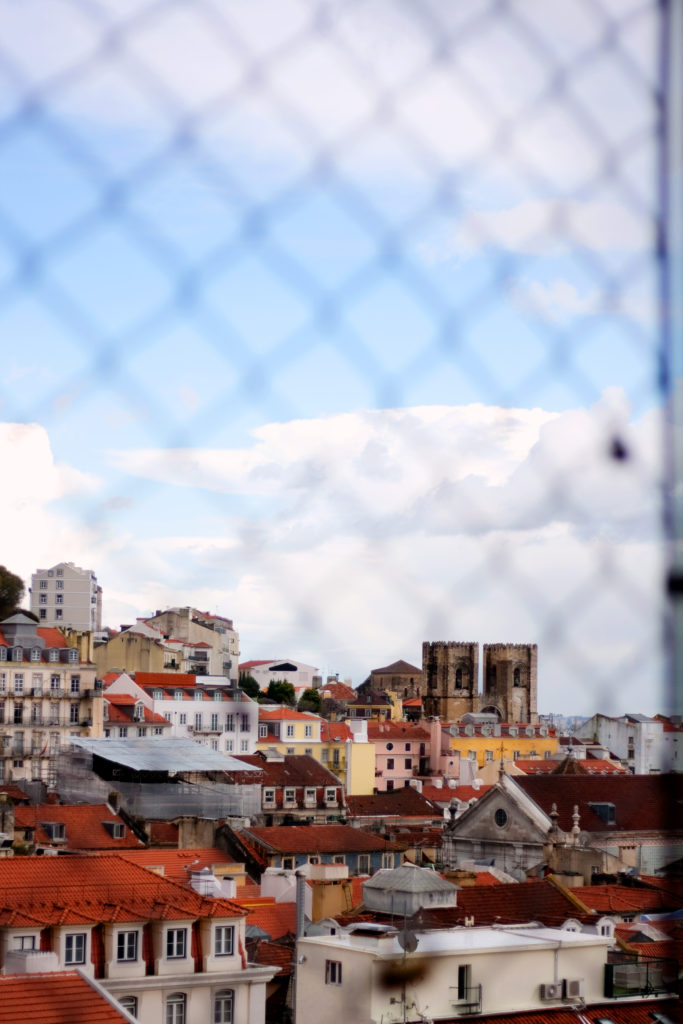 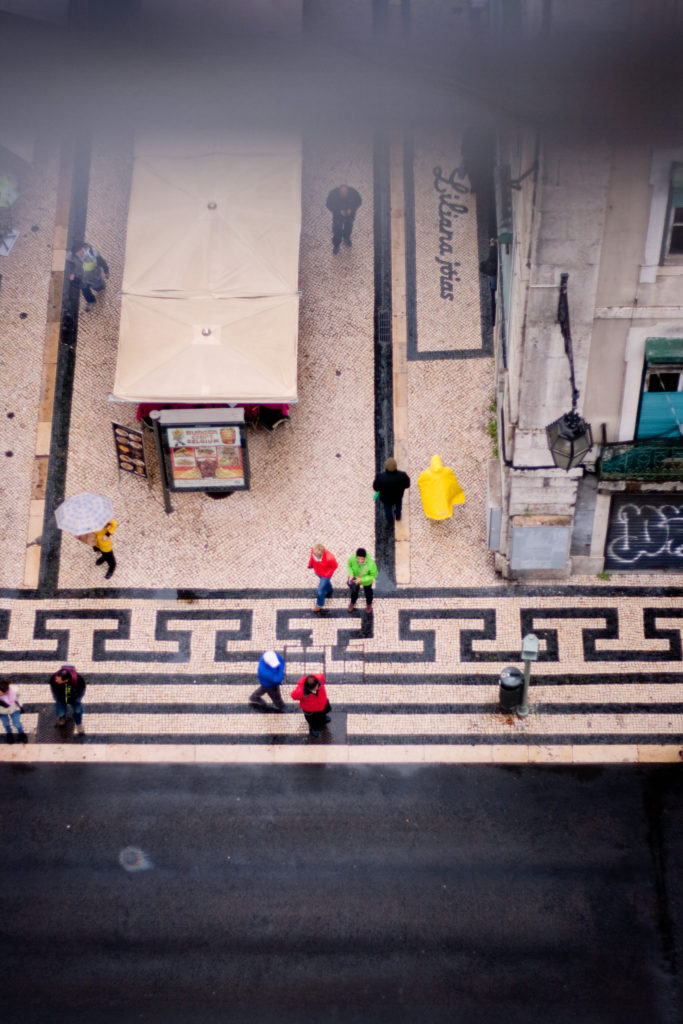 Everything (including the nightlife) starts really late

Great if you’re a night owl, not fantastic for early birds like me!  Going out for dinner is a 9pm thing and going ‘out out’ only starts at around 3am and continues way into daylight. My body clock/granny like tendencies were having none of that. 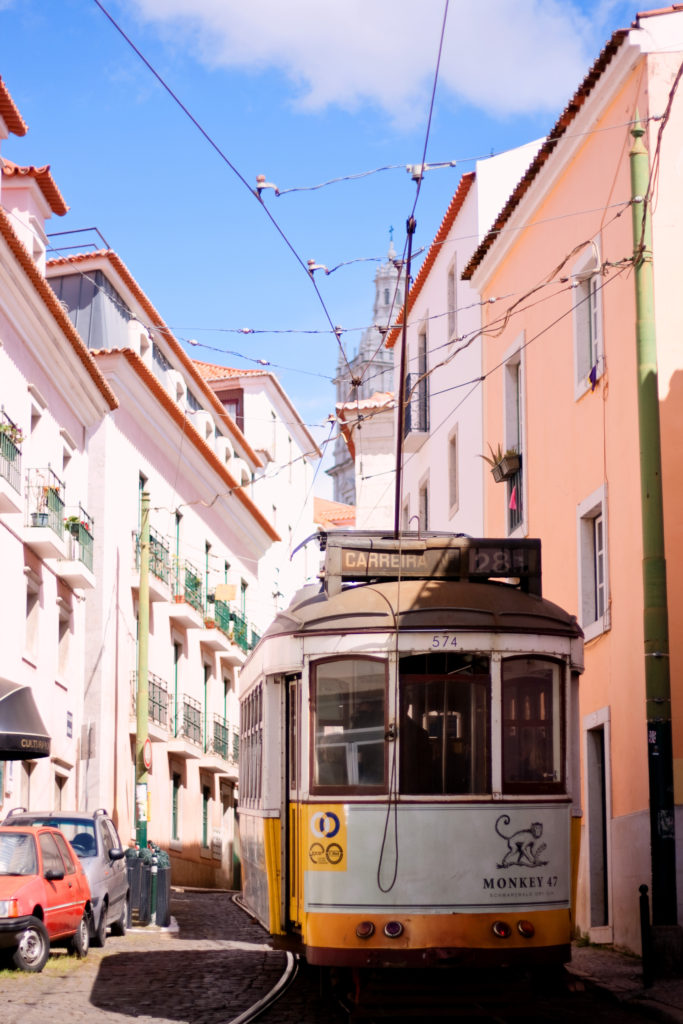 And by ‘worth it’ I mean worth the squished and bumpy ride, because the cost of all public transport in Lisbon is covered by a Lisboa card anyway.  But yes, the infamous tram that comes up in 9 out of 10 Lisbon photos on Pinterest is worth the experience!  They’re old, they’re a bit rickety, but they take you on a whistlestop tour of the city centre and feel very retro.  Apparently they’re a pickpocket hotspot though, so take care!  I hopped on at Martim Moniz Square right outside my hotel (where there was some kind of early morning salsa class going on, interesting viewing) and trundled along the streets.  Even at around 9am the tram was busy and I had to stand up at the back so I can only imagine how packed it gets by mid afternoon.  Being an early bird does have its perks! 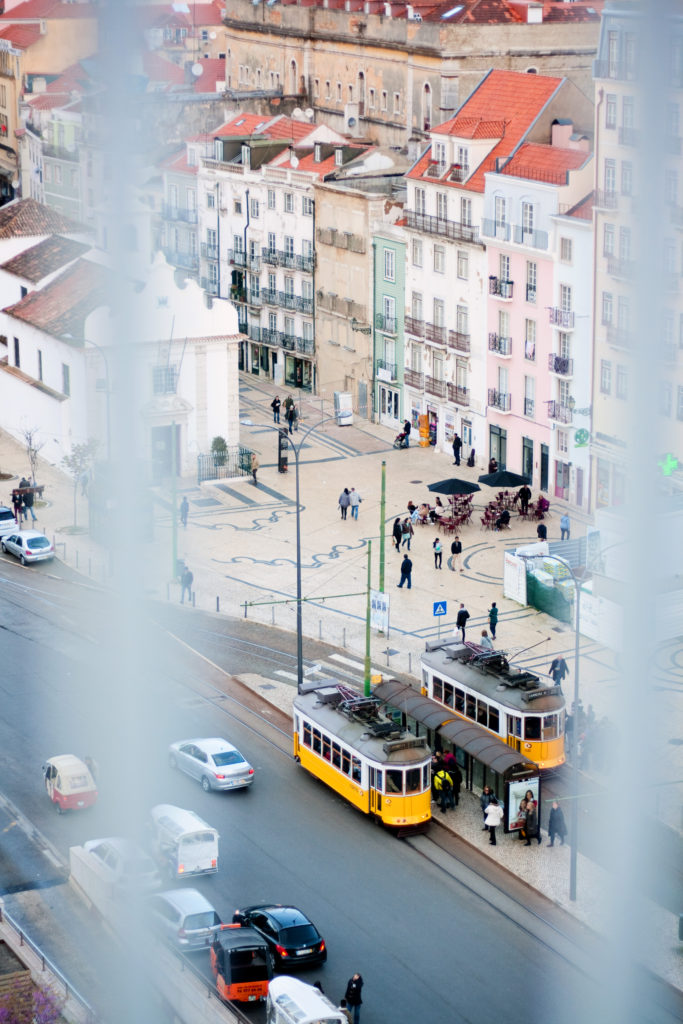 The streets of Alfama are PERFECT to get lost in 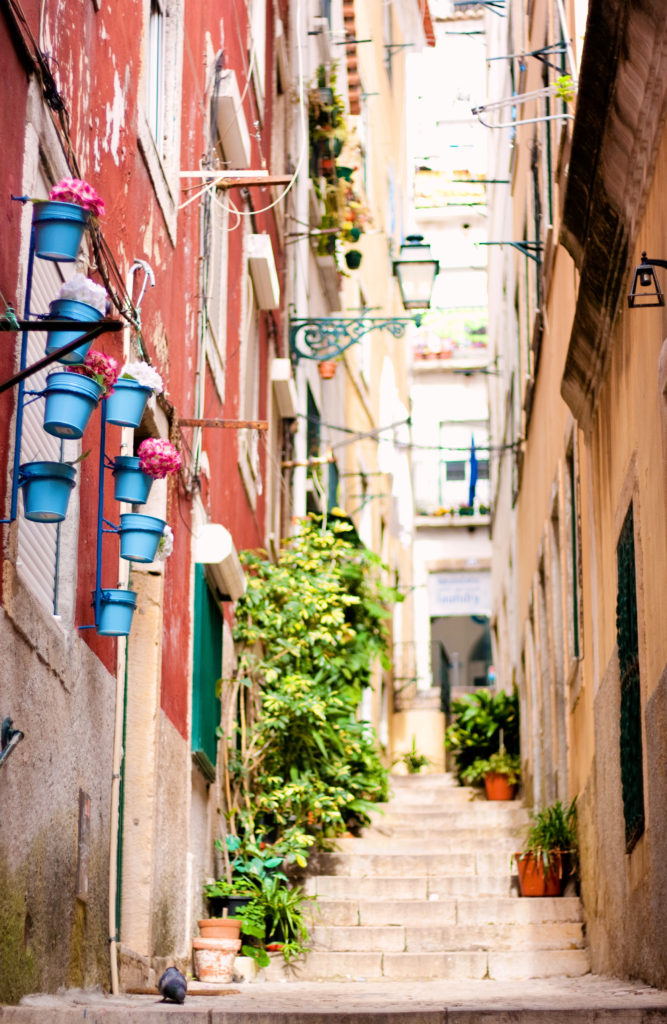 Oh Alfama you were my favourite district by far!

I’d kind of assumed I’d ride the tram until the end of the line, but everyone seemed to be getting off once we reached a particular viewpoint. so off I hopped too to see what all the fuss was about.  A very pretty view, that’s what. However, it didn’t take me long to get distracted by the little streets heading down from the viewing platform and quickly get lost in the maze that is Alfama.  At this time in the morning it was super quiet and basically the only people were the odd tourist and locals hanging their washing out – how very quaint.  The streets were the narrowest I’ve ever seen and so hilly but I loved that about it.  And omg the tile porn.  Do not miss this area on a trip to Lisbon! 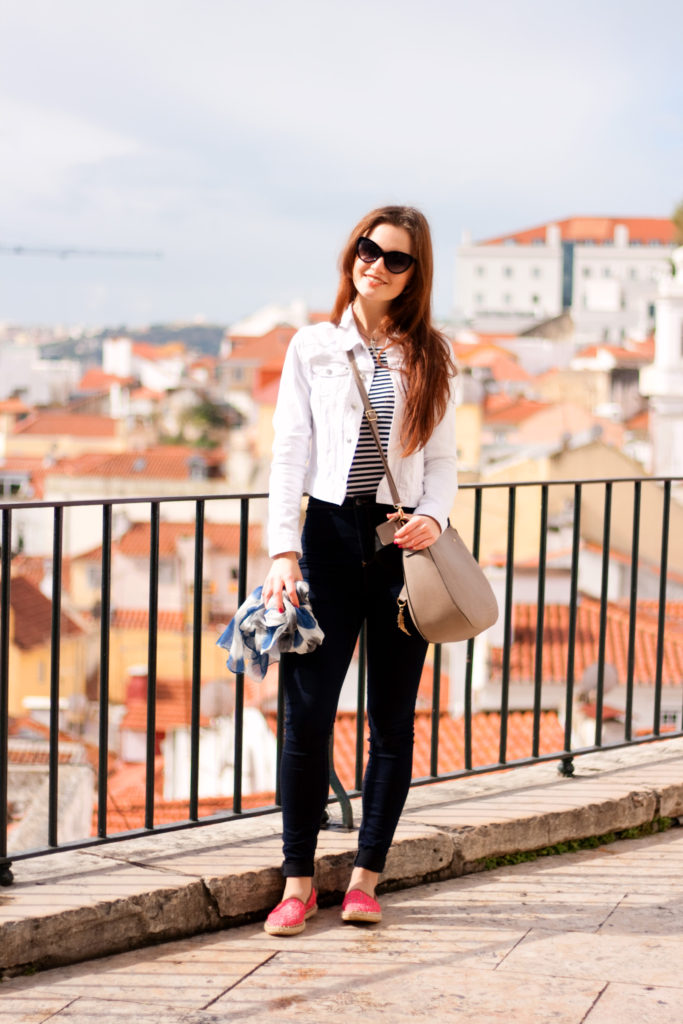 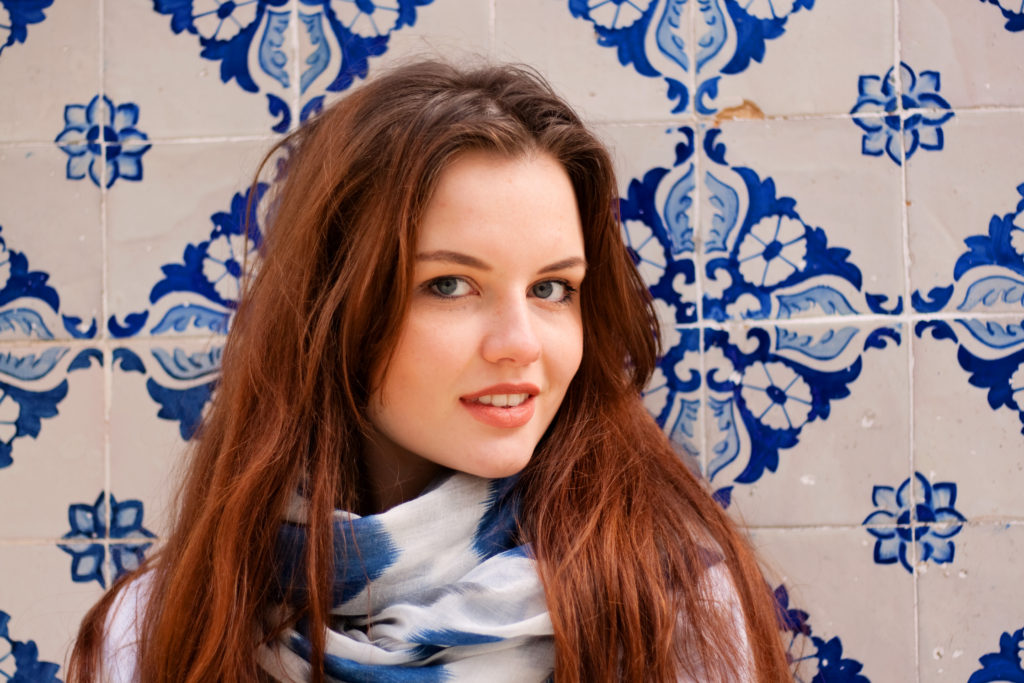 How the photos when you were on your own, I hear you ask?  Well, whilst at another Miradouro (a much quieter one this time) I was snapping away and started chatting to a couple of French guys who turned out to be photographers. One had had his camera stolen when he turned his back for a second (foolish move) and felt lost without it.  So I basically became the temporary muse for the morning!  He was directing me where to stand for the best backdrops and whatnot.  Talk about a blogger win!  All of this was communicated through Frenglish and gestures, btw – my French is what you’d call virtually nonexistent.  I joined them and continued to meander around Alfama, stopping for photos where ‘la lumiere est tres bonne’.  Sometimes travelling alone can actually make it easier to meet people. 🙂 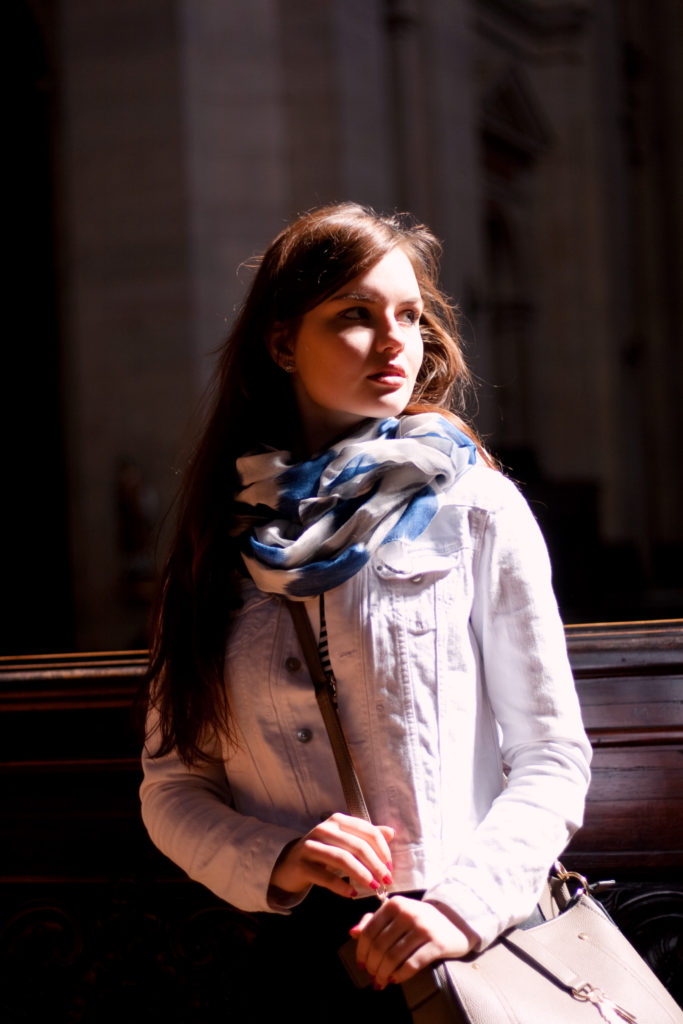 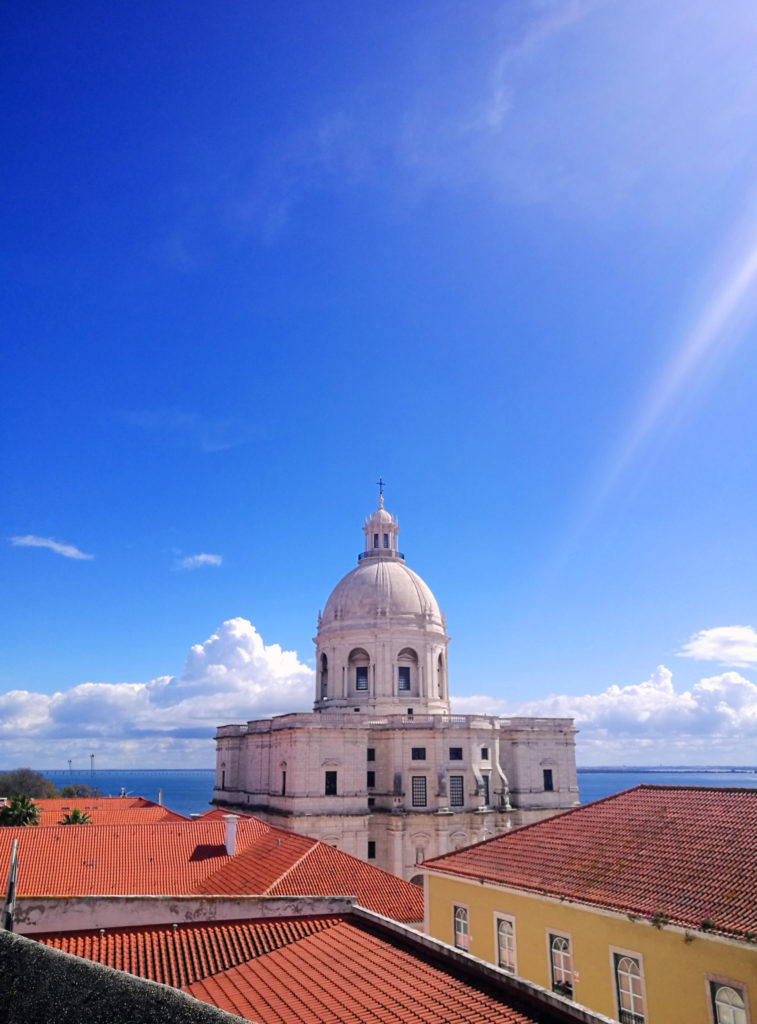 Luckily for me the rain held off for this morning, although I’m sure Alfama and the views across to the Pantheo would be nice regardless. 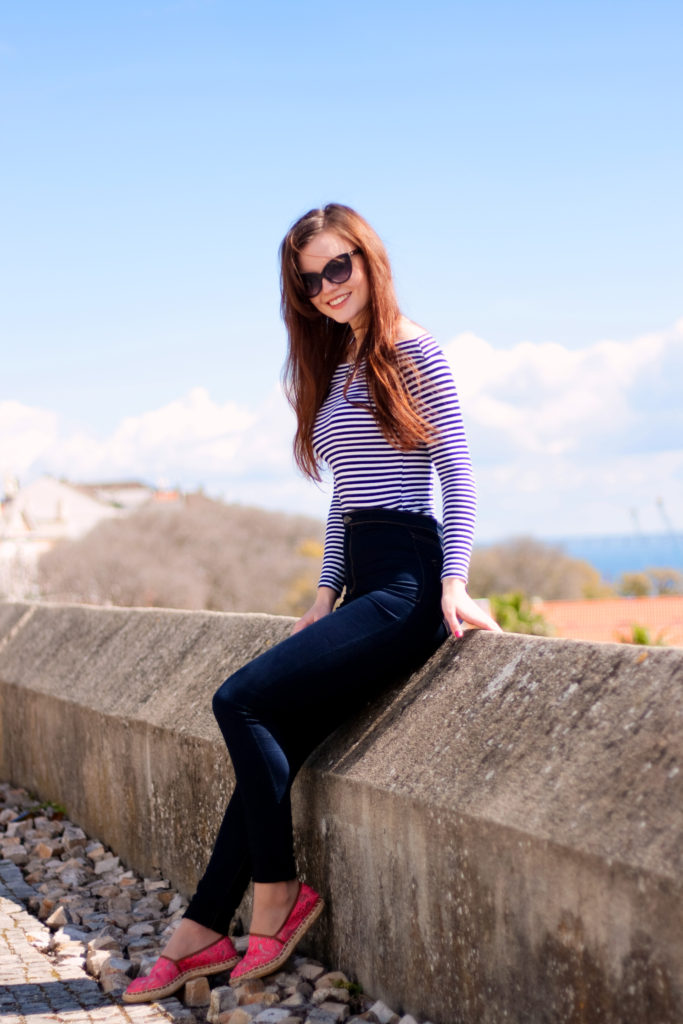 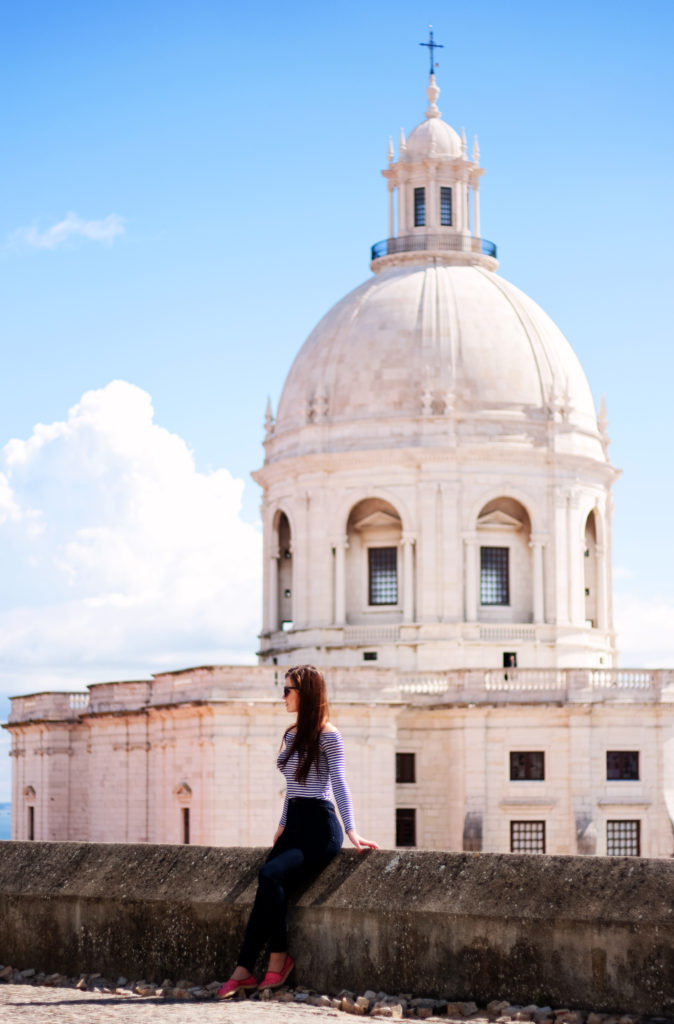 Portugese food is A+++

Someone bring me a plate of this now puh-lease!  After my morning in Alfama I had lunch planned with the lovely Mathilde from the Bairro Alto Hotel, so recharged my camera batteries and headed over.  I had a nosey in their most special rooms then lunch, and now I want this lunch every day.  The Portugese seafood-heavy diet suits me very well!  Codfish was everywhere on the menus and usually served combined with fried potatoes, but the Flores restaurant at the Bairro Alto Hotel served them separately and they’re sooo good.  I’ve fallen a little bit in love with Portugese food, in case you couldn’t tell.  Definitely struggling with Pastel de Nata (custard tart) withdrawals.  No photos because I ate them too quickly but SO FRICKIN GOOD. 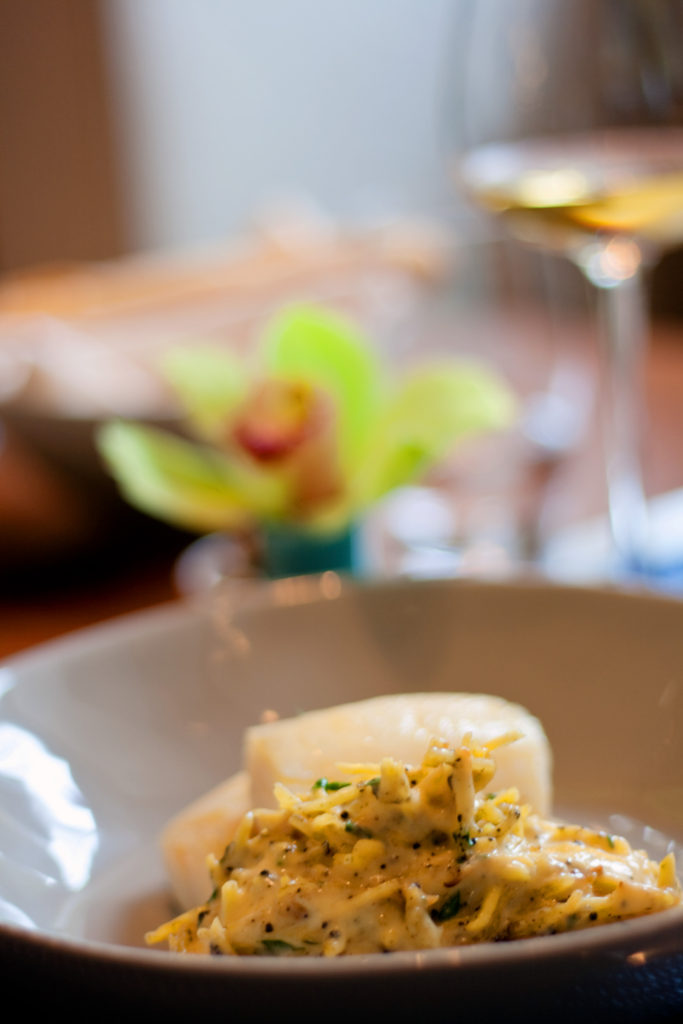 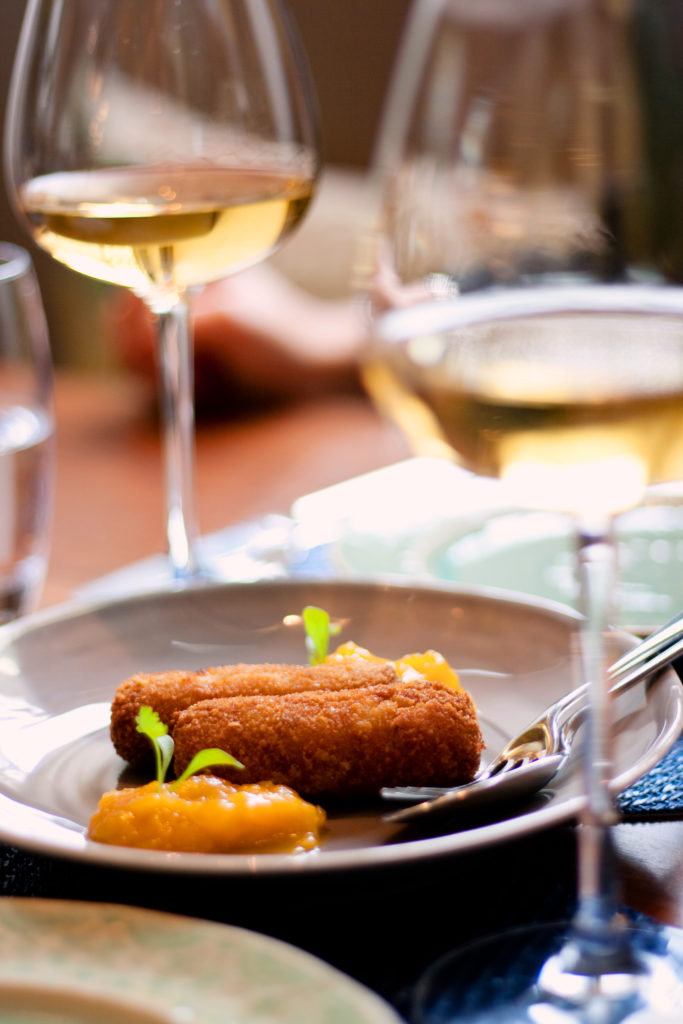 Live Fado music is quite the experience

One I don’t have photos of sadly because it was in a dark restaurant, but that only added to the atmosphere! On my last night in Lisbon I headed out for dinner with 2 lovely ladies I met at my hotel to for a night of live Fado music, v v indulgent food and correspondingly indulgent amounts of red wine.  Yes to the wine.  Fado is nothing like anything I’ve heard before and at one point the Portuguese lyrics sounded very much like something rude, but it’s cool to listen to!  Most people in the restaurant (Restaurante Guitarras de Lisboa) knew the words and joined in, so it was definitely a place filled more with locals than clueless tourists like ourselves.

A Lisboa Card gives you rainy day things to do

And rainy day things I needed on my last day.  I took it a bit easier on my final morning because it was well and truly bucketing it down, so I made the most of my cosy hotel room for the last few hours then w to see what else I could do with my Lisboa card.  I settled on going up the Rua Augusta Arch and inside the Lisbon Story Centre – needless to say I was the only fool on the rooftop of the arch (by a river, in the wind and rain… great idea Lily) but the story centre was a cool way to learn more about Lisbon since I hadn’t done any tours.

I loved the sociable atmosphere in here and the fact that you can easily do a lap of the place to check out your options before deciding.  Gotta take care over these big foodie decisions.  I kept up the fishy theme I’d been following all weekend and went for a salmon burger with sweet potato fries.  Everyone and their mother had sought refuge from the rain in the indoor market so finding a space to eat wasn’t the easiest task, but it all made for a better atmosphere.

Food isn’t the cheapest (not in central Lisbon anyway)

You hear lots about the beer in Lisbon being ridiculously cheap, but food not quite so much.  Definitely not around the Baixa area where you can’t so much as glance at a restaurant without someone coming over to try and coax you in, anyway!  I quickly learned to steer clear of eating in this patch – apparently Bairro Alto is the place to be for food and drinks.

Things I’d like to do if I went again: 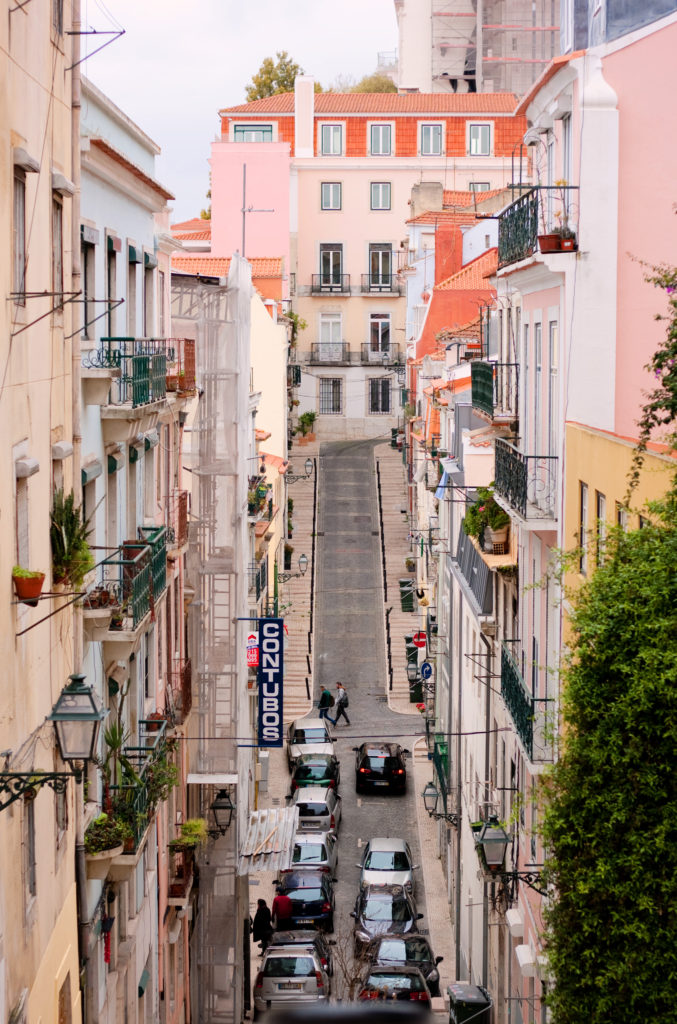 25 de Abril bridge – The San Francisco lookalike that is!  I saw it from afar in the haze and from above during the flight, but didn’t make it along the river on this trip.  One for next time.

Belem – entry to the Torres de Belem is included on the Lisboa Card and it looks really impressive, so for that reason alone I’d go.  Belem is the original home of the Pastel de Nata too so I’d be lying if I said that didn’t tempt me!  Have I mentioned those custard tarts enough yet?  I fear not.

Bairro Alto – like I said, it’s supposedly the place to be so I’m sad I missed out this time round!

Daytrips to Cascais and Sintra – I’ve already ticked Sintra off the list (thought it deserved its own post so watch this space) and the other train trip included on a Lisboa card is to Cascais.  It’s a beach destination so I assumed more suited to warmer weather, but if I returned to Lisbon in summer I’d be there. 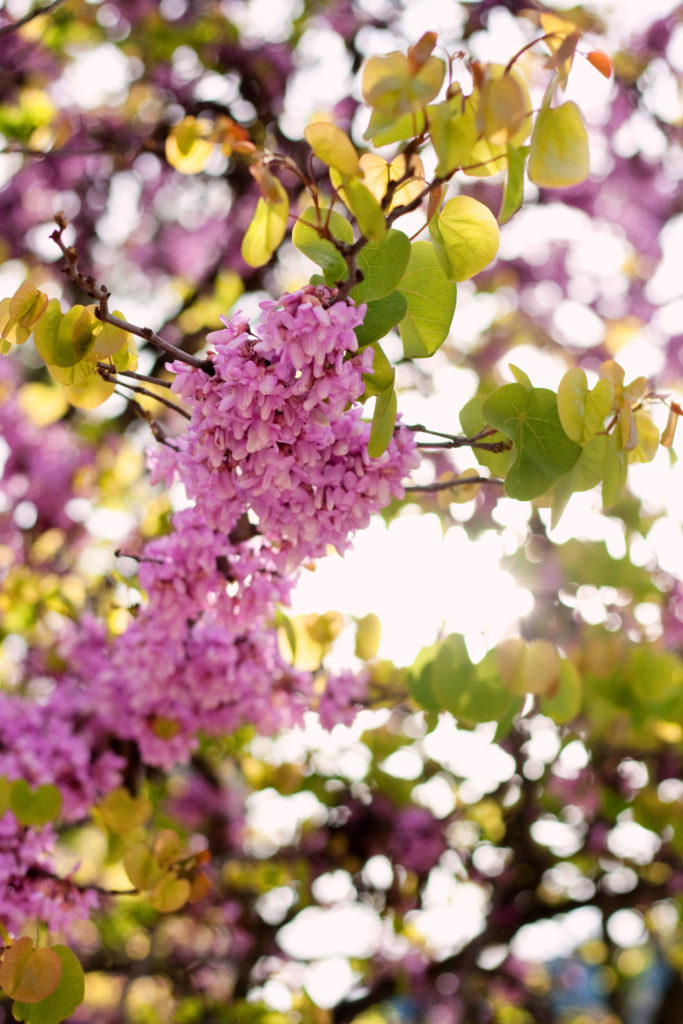 And that’s a wrap for Lisbon part 1!  My hotel was SO amazing that I thought it deserved a post of its own, and the same goes for my daytrip to Sintra, so stay tuned (or y’know, follow me on twitter or something) for parts 2 and 3. 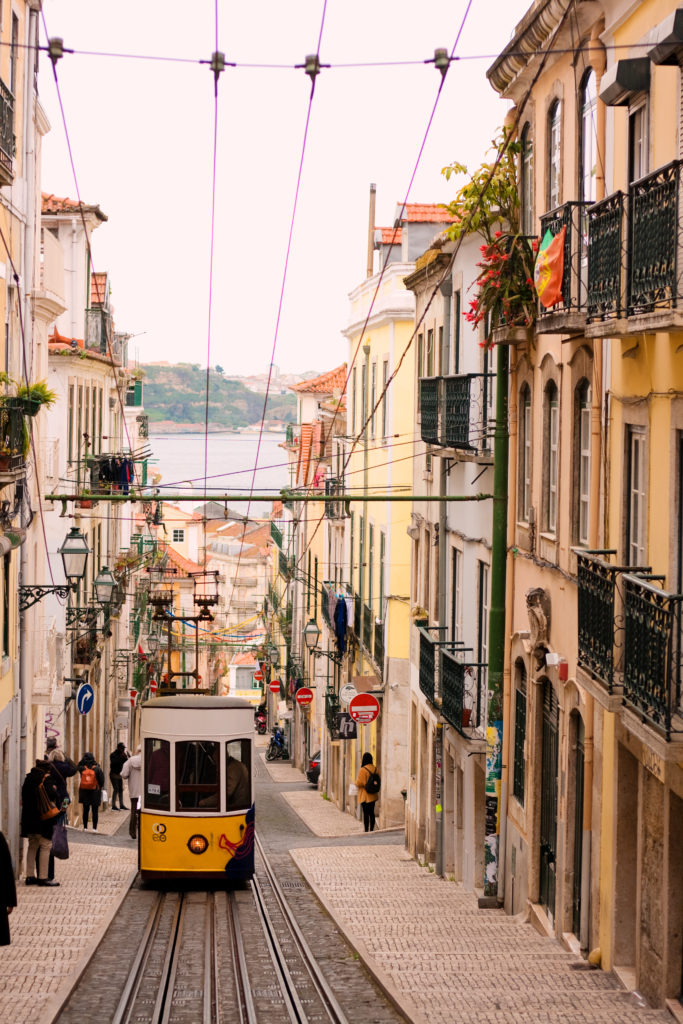 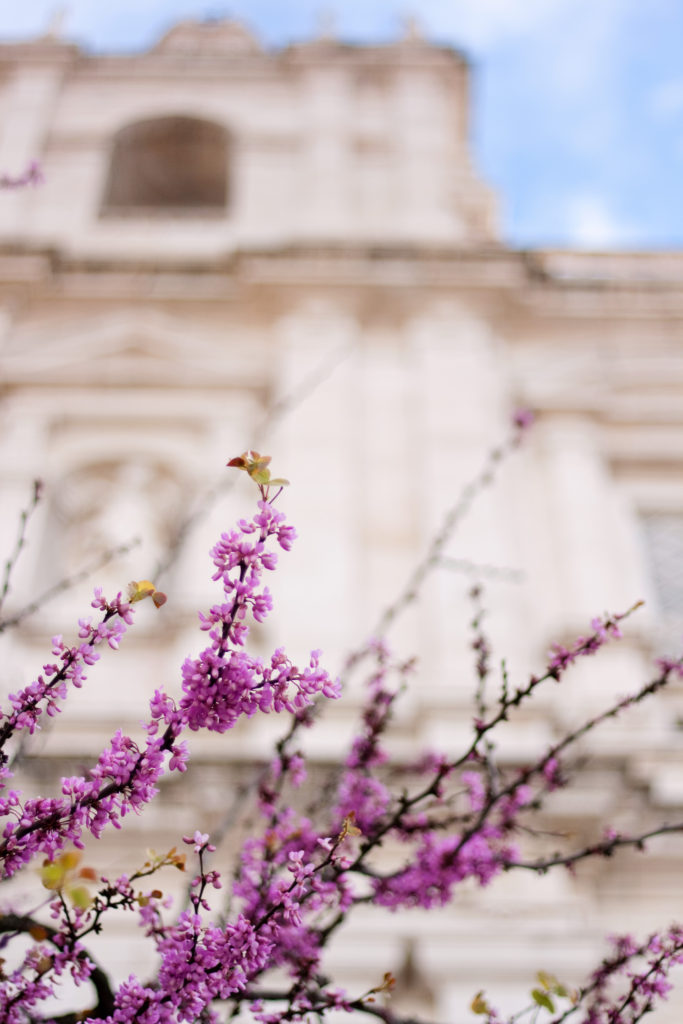 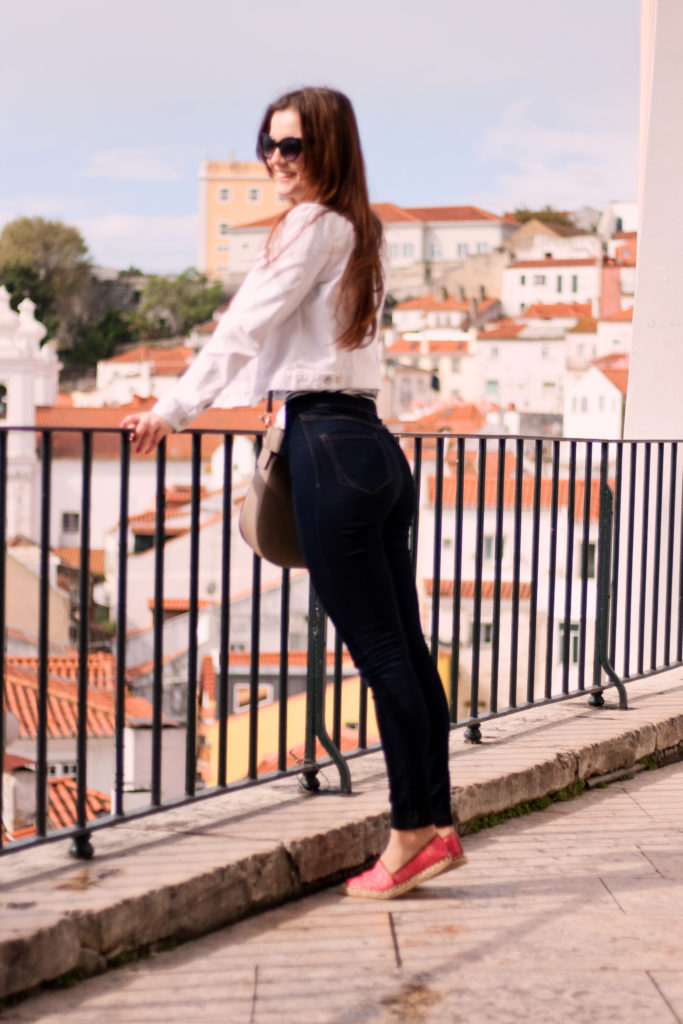 Monarch, the scheduled leisure airline, operates year round flights to Lisbon from Birmingham, London Gatwick and Manchester airports with fares, including taxes, from £51 one way (£84 return)

My flights and Lisboa Card were courtesy of Monarch Airlines and Visit Lisboa, however all opinions are my own. 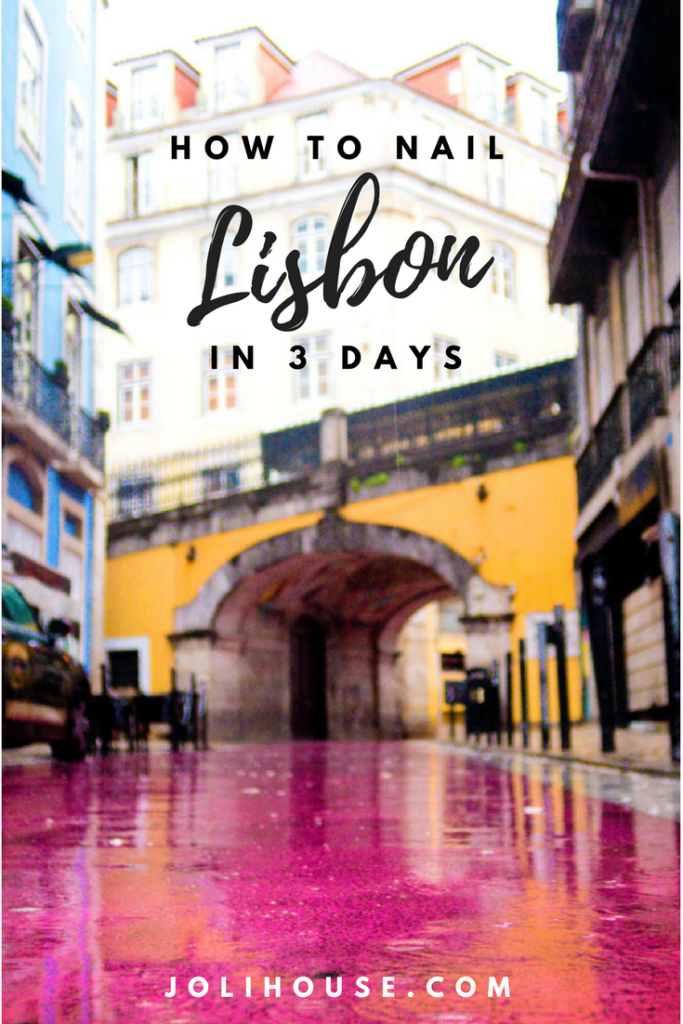