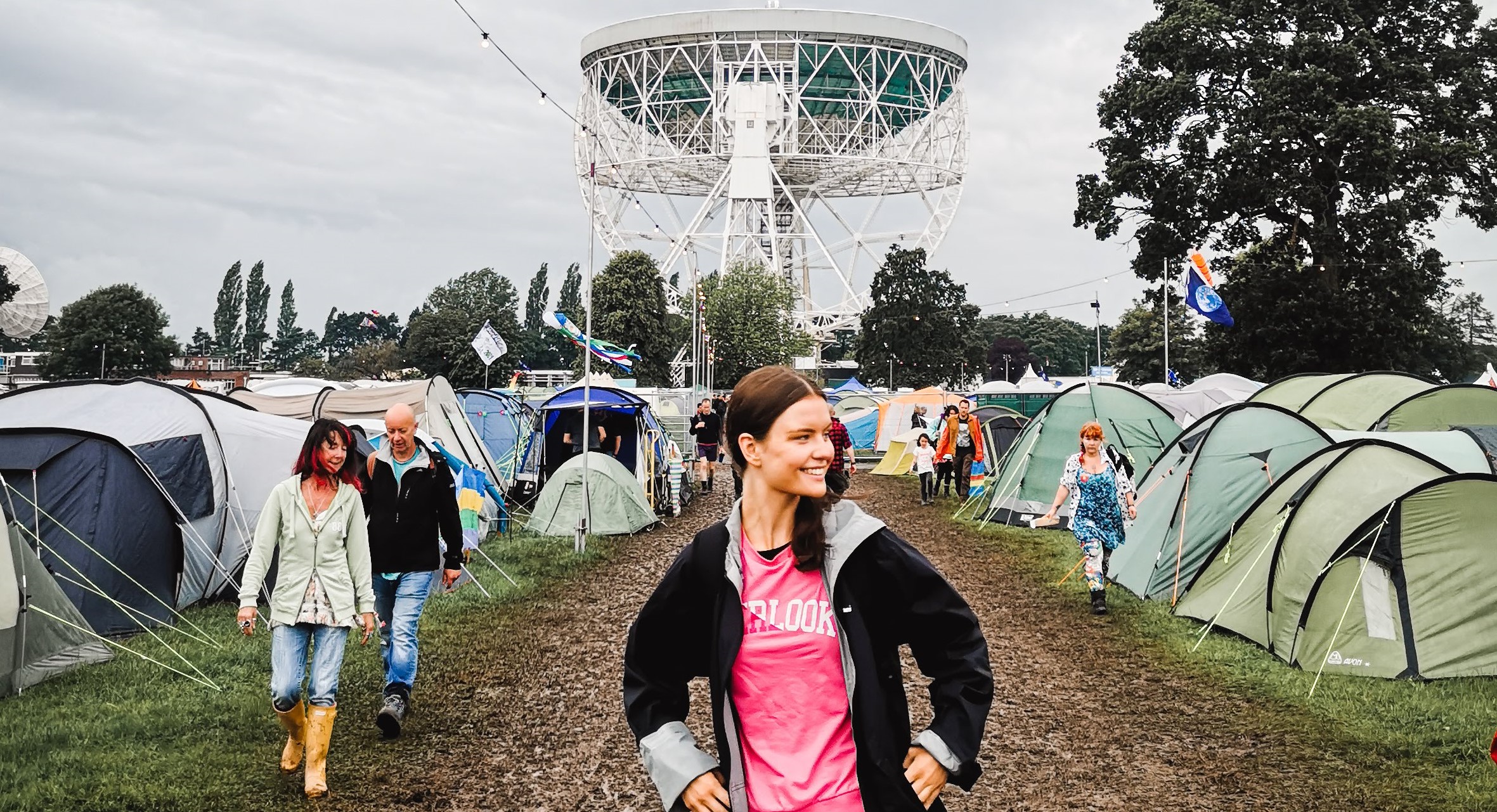 Oh Bluedot Festival, how I love thee. 2019 was my third year attending this science/music/arts/wellness/all things quirky festival and it certainly didn’t disappoint. Bluedot wasn’t blessed with blue skies this time around and the heavens opened many times throughout the weekend, but rain failed to put a metaphorical dampener on the experience even if it certainly added a physical one. If you follow me on Instagram you’ll have seen my festival spamming already, but I’m gonna share my highlights from Bluedot 2019 in the hope of convincing you to jump on those early bird tickets and book Bluedot 2020 already.

It’s best to say upfront that I was invited to Bluedot as a Blogger Ambassador, meaning I was offered tickets in exchange for a blog feature and social media shares.  ‘Twas an honour to be invited for a third year on the trot, so here goes with my (honest) best bits.

Science talks on the main stage

For a science and music festival, the science speakers are as likely to amass headline crowds as the bands.  Obviously.  So this year it was great to see the headline talks take place on the main Lovell stage where a huge crowd can form, not in a smaller tent like previous years.  In last year’s blog post I actually wrote that ‘scientists on the main stage whilst the musicians take the tents for a wee while’ might not be a bad idea and it would appear the organisers listened to me!  Taking full credit for that.  Bluedot festival as a whole took on a larger scale this year with more stages, more standing space for talks and more space around food stalls, so it’s great to see this festival getting bigger and better.  Standout talks this time around were Dallas Campbell on How to Make a Spacesuit (shoutout to the stitchers who made the moon landing possible), Tamsin Edwards on Polar Thinking (explaining how climate science isn’t so black and white), Jim Al-Khalili on Time Travel in Einstein’s Universe, and several stand up comedians whose shows I happened upon by accident but had a proper giggle through.

A festival celebrating the ‘pale blue dot we call home‘ obviously has to do its best to look after said pale blue dot, and you really can’t fault Bluedot’s commitment to doing so.  The most visible example were the free reusable water bottles supplied by United Utilities to support the festival’s effort to be plastic free.  These metal bottles hung from the beltloops and backpacks of almost everyone, which just goes to show that plastic bottles really aren’t necessary.  The same goes for reusable pint glasses, tin mugs, Vegware cutlery and paper plates.  No single use plastic in sight. Another loosely related feature was that Bluedot 2019 was a totally cashless festival, with payments made via wristband that you could top up at various stations. Queues went down quicker so food and drinks were in your belly quicker – always a bonus.

One of the main reasons I wanted to camp this year rather that retreat to a cosy dry bed was to see more of the headline music acts at night, and I’m glad I did even if for the atmosphere alone.  Everyone may have been soaked to the skin by 9:30pm, but people of all ages were bopping along regardless.  I won’t lie though, I was kinda confused by Kraftwerk and much preferred Friday’s headliner Hot Chip, but maybe that’s just because 80s electro music isn’t my cup of tea however pioneering they were at the time.  It’s worth noting that Bluedot is definitely a family friendly festival too – not something I concern myself with at this point in my life, but the number of kids having a great time on their dad’s shoulders past their bedtime would indicate it’s the festival to book if you have little ones in tow.

Yours truly has been bitten by the yoga bug lately so of course jumped at the chance to slip a yoga class into my festival weekend.  The ‘Elevate’ area at Bluedot is dedicated to wellness, with yoga and meditation classes, hot tubs, massages and good food and drink on offer.  It’s the little zen corner of the festival and I’m glad I stopped by – a morning yoga class really sorted me out after 2 nights of walking around ‘til late, drinking and sleeping in a tent.

Because of course food was a highlight.  We chose to only ever buy one meal at a time to share, that way we could try a wider variety over the weekend and it was definitely the way to go.  My personal highlights were salt and pepper squid, ‘hangover cure’ grilled cheese (did the job), and Tibetan ‘momos’, but there really was something for every diet.  Vegetarians, vegans, gluten-free-ers etc. are all well looked after at Bluedot.  Festival food isn’t cheap – as is to be expected – but at least it was really bloody good.  For the most part.  One wrap was a bit ‘meh’, but everything else was great.

Some of the more subtle ‘attractions’ were actually my favourites, such as the Submergence by Squidsoup installation.  Fun if you’re a kid, especially fun if you’re a bit drunk.  In another area you could speak into a lightsabre-esque thing and your voice be translated into light and sound waves, which made pretty patterns in the sky – one for kids and big kids alike.

‘Camp so we can stay out til 3am and see all the nighttime acts’ was the plan, especially since this year’s festival was 50 years to the day since the Apollo moon landing and midnight showings and ‘moon bounces’ were scheduled to celebrate.  My reality was a little more like ‘walk around ‘til your legs nearly drop off and give up trying to stay awake at 00:35’.  How anyone stays awake for a full afternoon and night of festival-ing is beyond me.  Maybe a longer power nap is the trick.  So whilst I missed the main celebrations because I was too busy being a granny who needed her (blow up) bed, it was pretty cool to be in such an iconic and important location for the 50th anniversary of such an event.

Otherwise known as the bougie area to drink snazzy cocktails and lounge on sofas whilst wearing your anorak and muddy wellies.  We were kindly invited along to try the Russian Standard vodka cocktails, which certainly didn’t disappoint.  Always nice to mix up your cider-from-a-reusable-plastic-cup with vodka-from-a-tin-mug!  I wish I’d headed back for one of the watermelon drinks too – drinking vodka out of a watermelon sounds right up my street.

I could easily spend hours at the book stall every year.  This time around I limited myself to only one purchase (unlike last year’s 4) as I have more than enough on my ‘to read’ pile right now, but many more popular science reads caught my eye.  ‘Life is a Joke and So are You’ is the one title that made the cut, by Robin Ince who I saw (and laughed at) at Bluedot last year.

I certainly can’t claim my festival outfits were a highlight; they mainly consisted of borrowed mens XL clothes and whatever else was dry at the time. In hindsight I realised a lightweight but long jacket would’ve come in really handy, as would another pair of long socks to keep my legs warm, but I survived. Looking back at last year’s blog post I’m in disbelief that I wore WHITE TRAINERS and spent the weekend walking on SOLID GROUND.  At least I’ve had an authentic British Festival Experience now, right?

Thanks again to Carousel PR and Bluedot festival for having me!