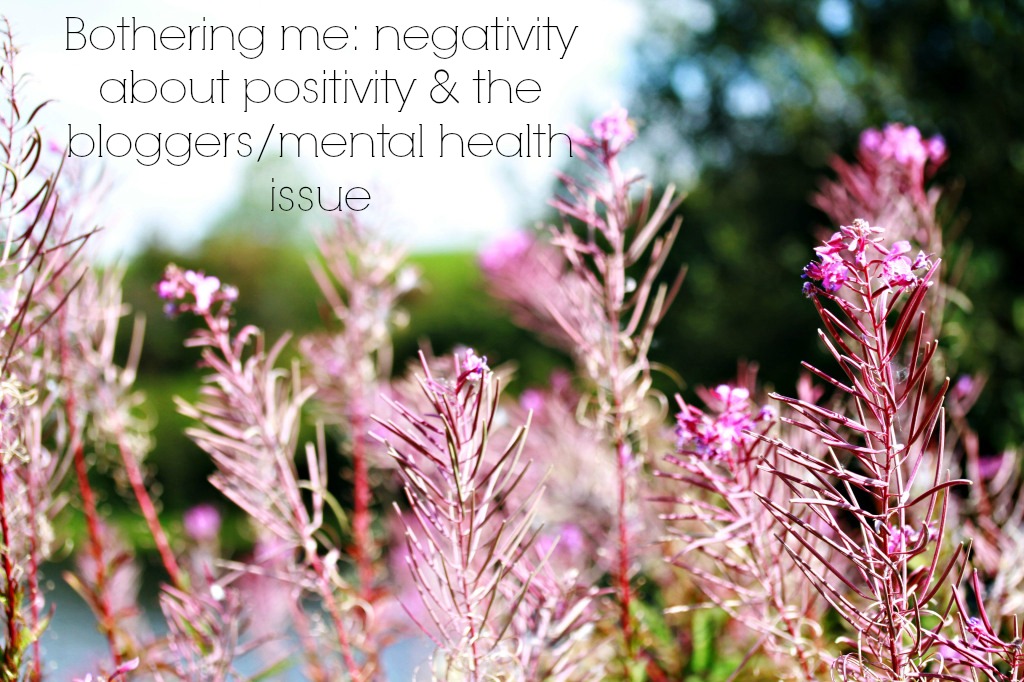 “What is bothering you?”

There are a few things that have irked me a little recently, funnily enough all surrounding the internet and social media in some way. Surprise surprise!

Comments about the ‘fakery’ of blogging have cropped up a few times lately, I’ve noticed.  Comments that blogs only show a fantasy life, not reality, and that people portray inaccurate images of themselves.  That there’s something wrong with staging a cutesy Instagram shot, ‘because that’s not real life!‘.  Of course not every tiny detail is shared on blogs… gotta be selective, right?  People sometimes complain that blogs only show the nicey nicey stuff, and that the crap that everybody unfortunately has in some way or other is conveniently left out.  The ‘perfect life’ image, if you will.  Not only is this not always the case (loads of bloggers do talk about their bad times in one way or another), but it really doesn’t mean that bloggers are fakes.  Of course not everything is gonna be shared on the internet: there’s no reason why anyone should feel obliged to do so.  Keeping the ‘negative’ stuff quiet and only posting about happier things doesn’t make anyone a fraud.

Alongside these comments, I’ve also heard non-bloggers complaining that blogging is easy, without realising that it’s all the meticulous care and behind the scenes work that make it bloody hard.  Yes, that #ootd might not have been quite what the blogger wore that day, yes those notebooks and coffee cups might not have arranged themselves so neatly.  Obviously I’m no professional blogger myself, so I’m really just defending those who are receiving these comments.  The annoying part – for me – is that you can’t on the one hand whinge that blogging is easy, and on the other hand say it’s fake and should be more ‘real’.  Artistic license, people!  We read blogs for fun, so it’s nice to be able to (most of the time) read about nice things.  At least I do anyway: I obviously like to keep it real, but a blog with non-stop complaining and negativity wouldn’t really appeal to me.  Maybe that’s just me.

In a similar kind of way, it really bugs me to see people taking the mick out of others, purely for being so positive.  This extends outside the blogosphere for sure:  I’ve seen facebook status’ with screenshots poking fun at people for sharing what they enjoy online, because it’s not cool to know what you’re talking about!  Or something like that, anyway.  Why the need to be negative about being positive?  Baffles me.

And then there’s the other side of the coin.

One of the most recent internet controversies has surrounded the ‘bloggers and mental health’ idea.  Katie wrote an amazing post on the topic here that I’d really recommend reading, so I’m no way gonna try discussing the whole thing.  Before reading her post, I’d noticed that many bloggers/youtubers/internet people do say they struggle with mental health in some way or other, with anxiety as the term I’ve seen most often.  There’s absolutely no way I’m gonna belittle any of these experiences, or deny that mental health is a serious issue that millions face every day.  Of course it is.  I have seen the effects of mental health on people around me, but have no personal experience of social anxiety, depression or any other mental battle in that way.  However, the relationship between the online world and mental health has made me think.  Once or twice I’ve felt in the minority in blogger chats for saying that I wouldn’t feel shy or nervous at an event, for example, which I (sort of) posted about here. I feel bad for saying that it wouldn’t bother me, when understandably others are saying it would.

Now this isn’t something that annoy me per se, so maybe this isn’t the right post, but rather it’s something I’ve felt a little unsure about, shall we say.  It’s really difficult to explain what I mean!

I’m not saying that people are jumping on the bandwagon, or denying the truth in what anybody says they feel at all.  Obviously it’s a good thing that issues can be talked about, as awareness is raised and more and more support can be given.  Good all round.  I just can’t help but feel that blogging and anxiety especially are seen kinda hand in hand at the moment, and that bloggers who don’t suffer from mental health are sometimes seen as less ‘real’, for want of a better word.  Like Katie said, big brands creating products with slogans like ‘I can’t keep calm, I have an anxiety disorder’, and the general publicity surrounding mental health at the minute, makes it seem like it isn’t ‘cool’ to be mentally OK.  Yeah, that does bother me.  From my perspective, but more for the genuine sufferers caught up in this idea that it’s edgy to be damaged. I don’t like that idea one bit.

Oh, the joys of the internet!