This week, as told by my camera roll.  Well, my camera roll ran through VSCOcam F2 preset.  Pretty much the same thing.  Shall we work backwards? 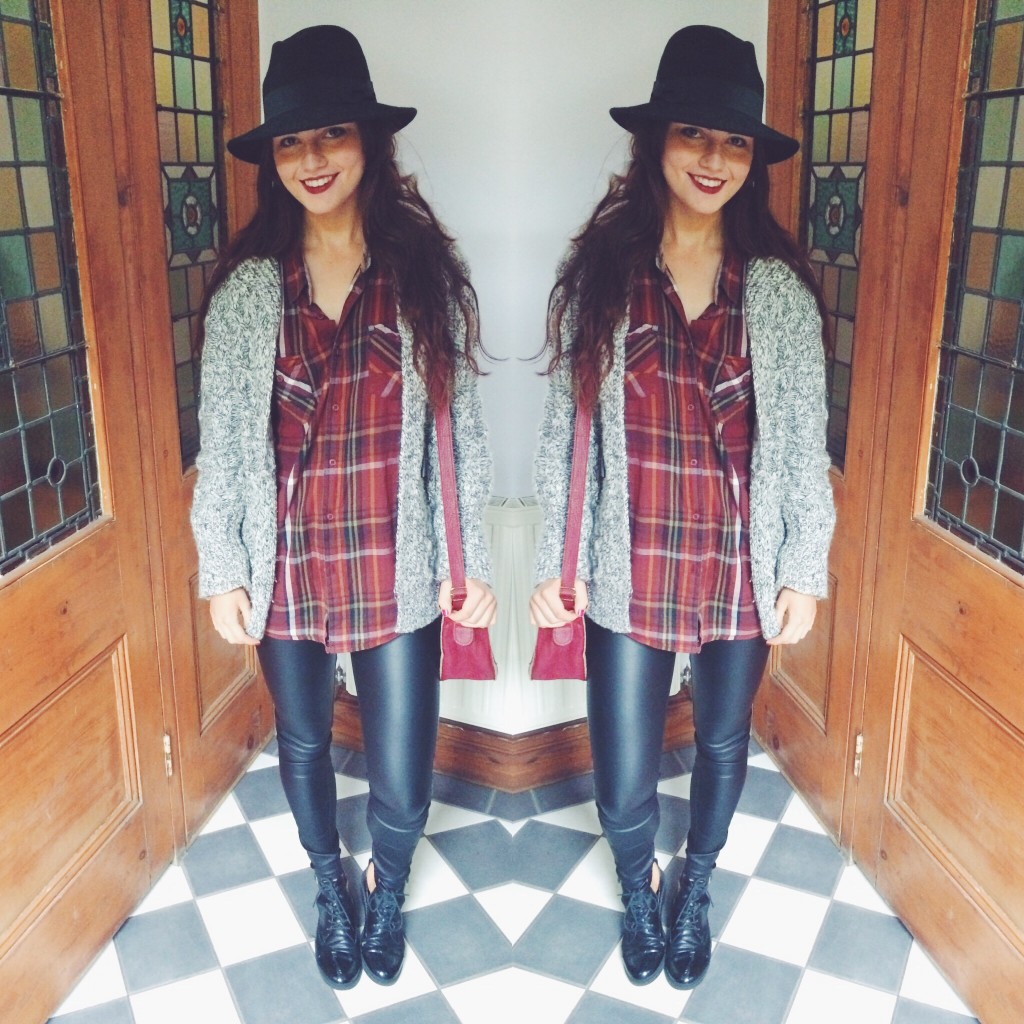 Saturday: Mixed up my usual hallway selfie angle because I’m living life on the edge these days.  And it was too dark in front of the mirror and mum just happened to be there.  Obviously my styling genius (sarcasm, dw) had to be documented somehow.  Styling genius consisting of my fave new Shiny Pants, black boots that have been worn to death and am a mission to replace, Jesse’s shirt, mum’s cardigan, and trusty fedora covering my bad hair day.  If by chance anybody cares what I wore on Saturday, there ya go. 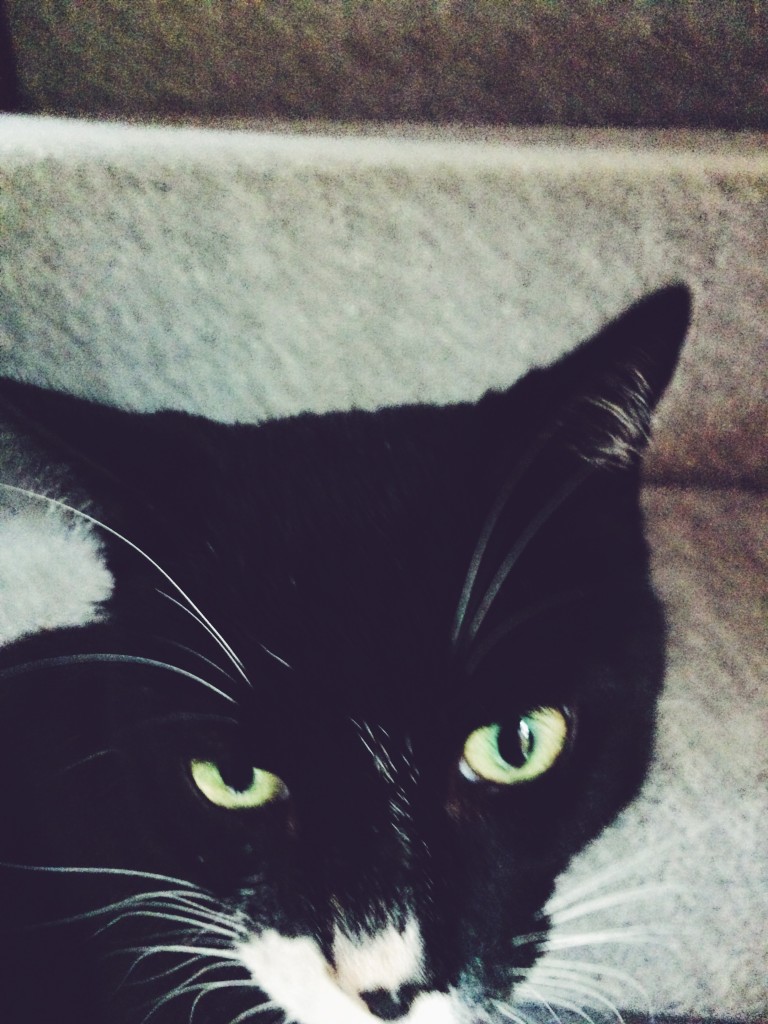 Blurry, I know.  The second you poke a camera or phone in his face, he won’t keep still.  This little snugglebum has been extra cuddly with me this week so I thought deserved a mention!  Our other cat, Catty (name not chosen by us) scratches me any time I so much as look at her, but Lambo is alllll about the cuddles and it’s so cute awh.  Just flops himself on top of me. 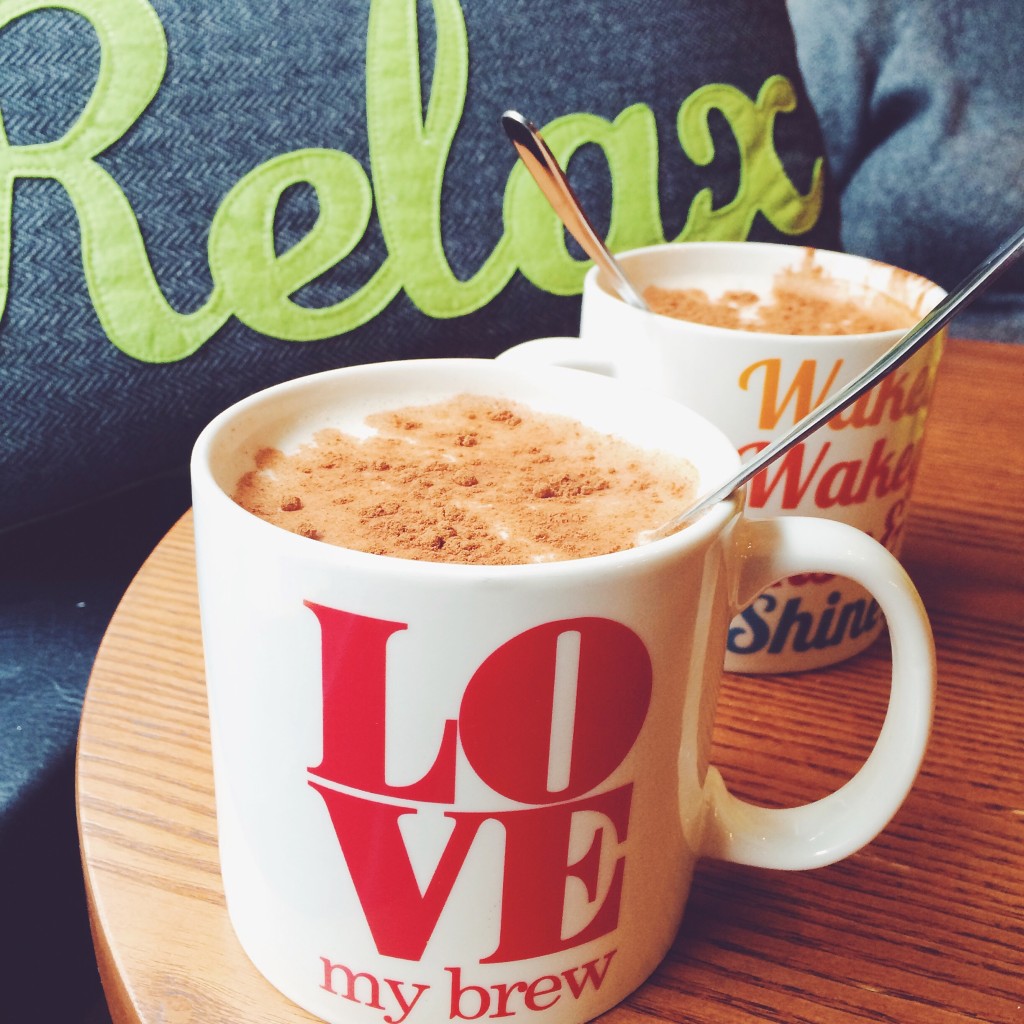 Malted milk.  I has found love.  Apparently I’ve had these before, according to my mum, but I defo can’t remember it.  Let’s appreciate the giant sized cute mugs too, please.  Just what we needed on a rainy afternoon in town. 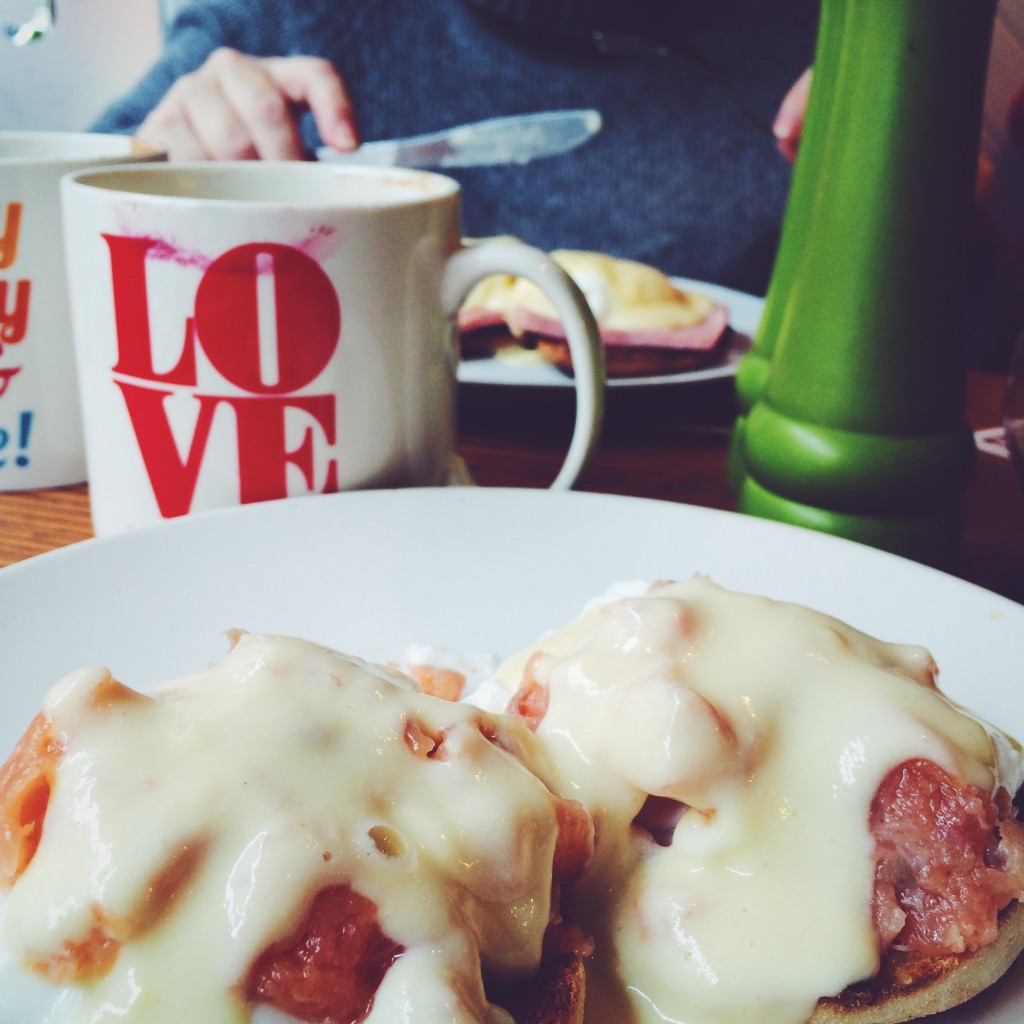 Tried taking an instagrammable shot of my Eggs Royale too, but I’m not sure salmon is the most photogenic.  She says, posting it on the blog.  Anyway, I’d been on a mission to find Eggs Benedict since it crossed my mind in the morning.  The kind of craving you can’t ignore, eh?  So yes, we found our Eggs Benedict/Royale, and devoured them alongside malted milks.  Ravenous Cafe in Preston, if anybody local cares to know. 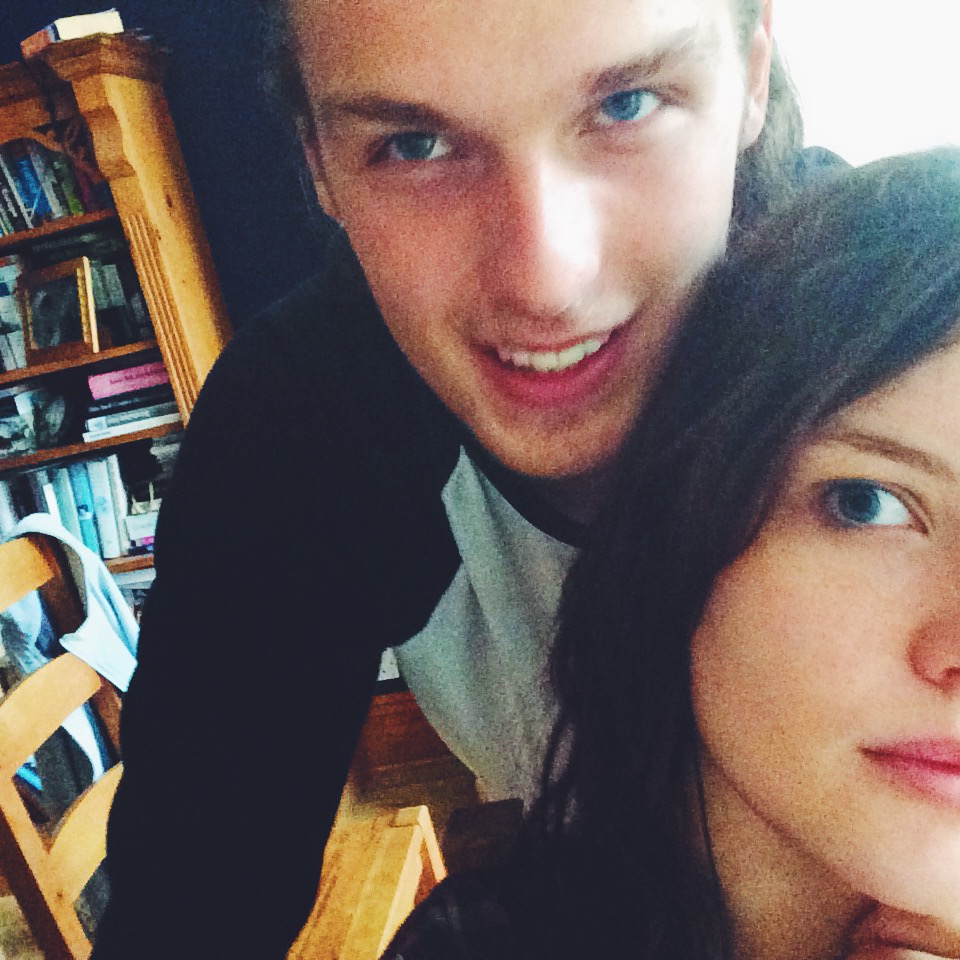 Hiiiiii.  Keeping me company whilst I edit and edit some more. 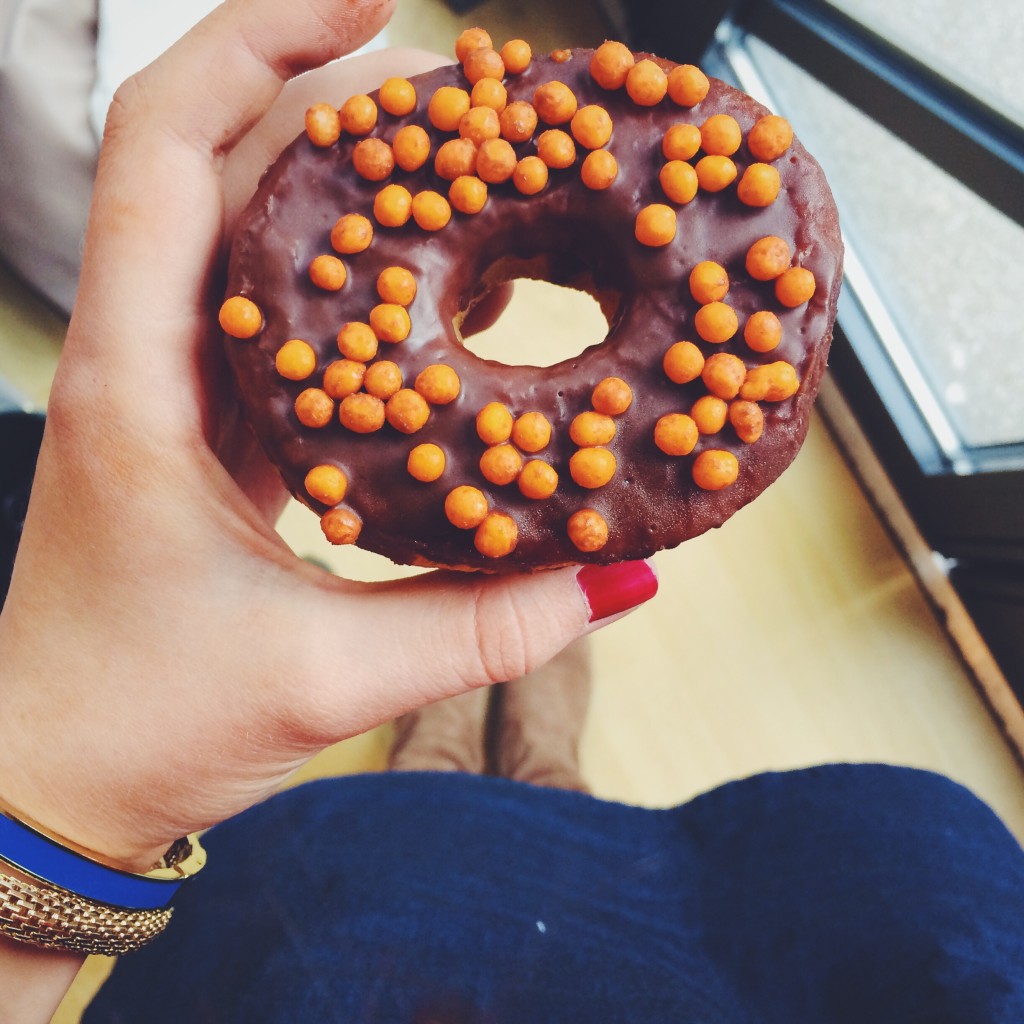 Friday: More food.  All the love for gals who nip to Tesco in their free period to buy donuts for everybody.  Thank ya Abbi <3 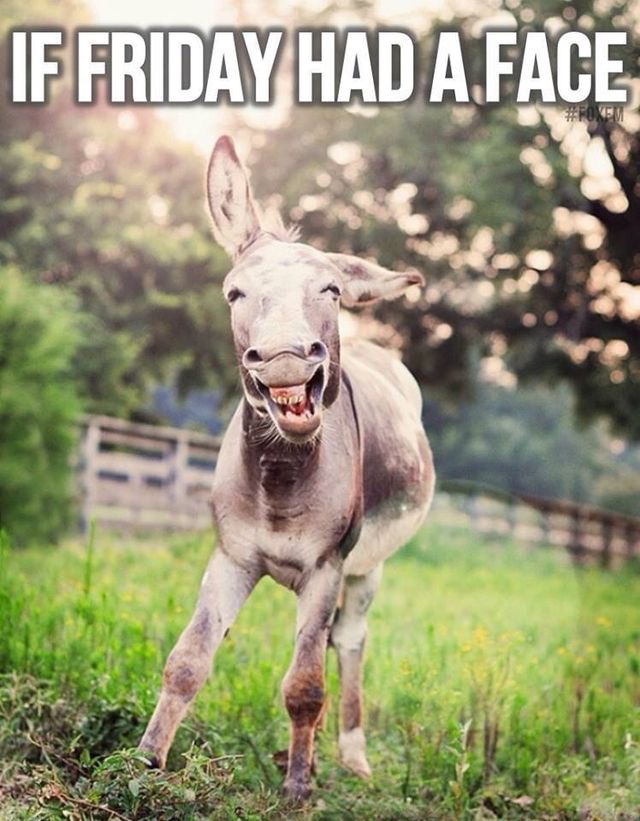 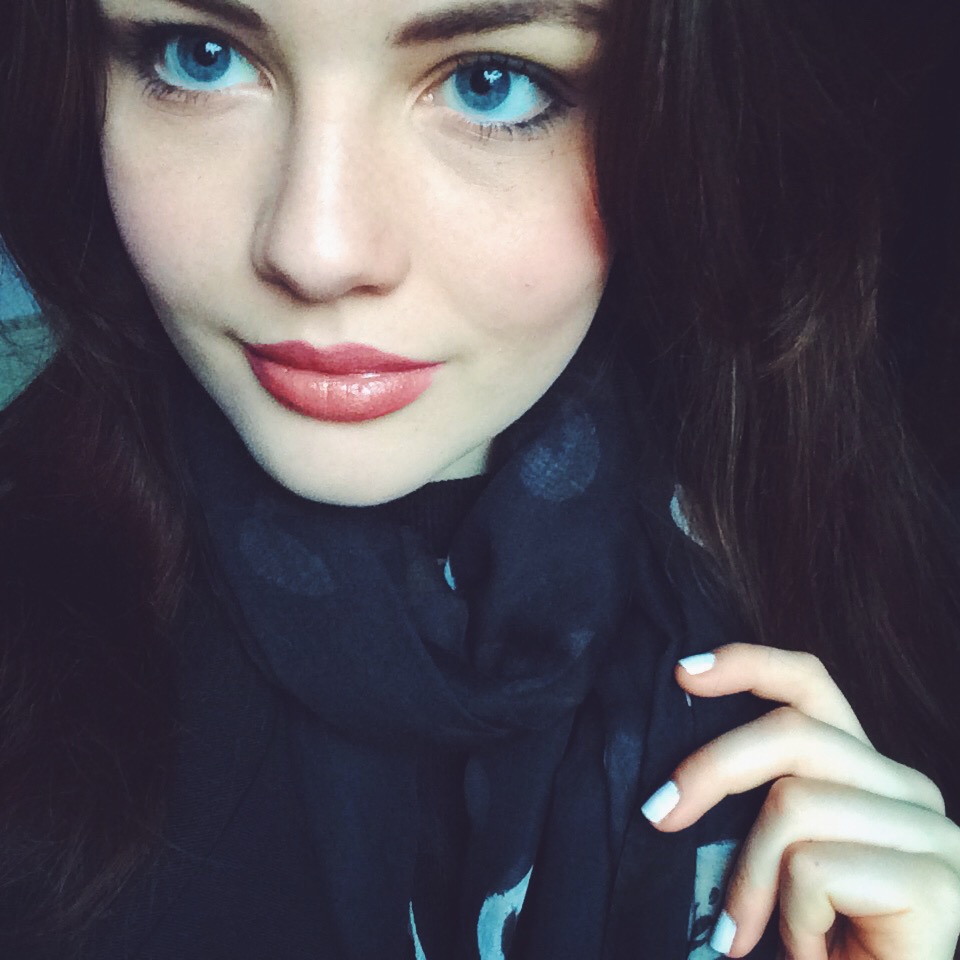 Thursday: the palest of pale selfies.  From the day I apparently ‘looked like death warmed up’ at 9am.  Apparently because I was wearing all black and had a vacant expression, but whatever.  Halloween hasn’t come early guys, no ghosts here.

(Sidenote: what should I be for Halloween?  I’m going away this week until Friday night and have a Halloween party Saturday night, so girl gotta decide quick.  Help meeee pls)

I gave myself a little St Moriz glow that night and now hopefully don’t look quite so deathly.  Hopefully. 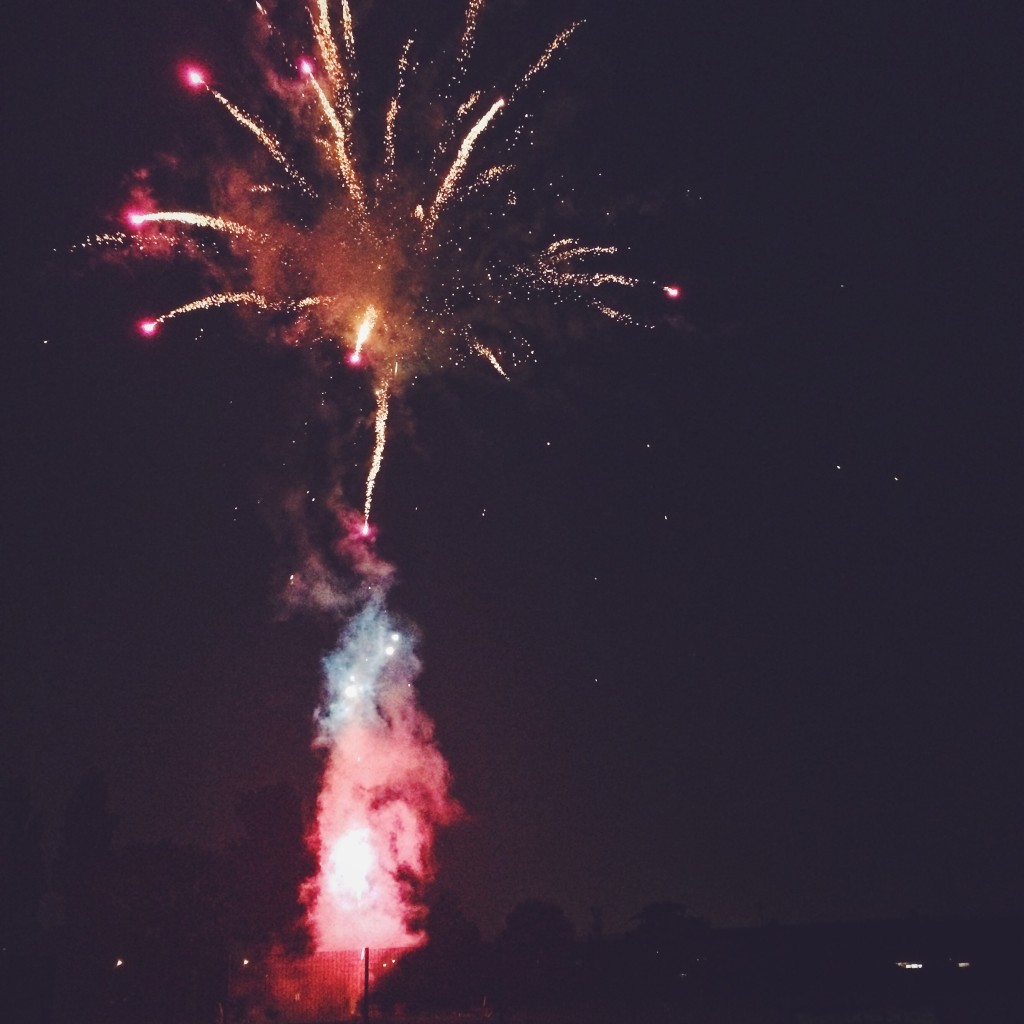 Wednesday: fireworks!  A couple of weeks ago I met Matthew Tosh, a pyrotechnician, to film a vlog for Tomorrow’s Engineers about the science of fireworks.  Said vlog was filmed at the setting-up stage in the afternoon, so lacked any, erm… fireworks.  Luckily Matthew was in the area again on Wednesday night, so off to the fireworks I went!  He gave a little talk to high school pupils about some of the chemistry and physics involved, then set off a few fireworks one by one and explained them, then set off a whole load more in a big fancy display.  Very impressive!  Whilst watching the display it’s easy to forget about all the science-y side and just see it as a big performance, but there’s so much clever stuff going on to make it happen.

I filmed the show on one phone and gave another to my dad to take a couple of shots.  I ended up with this: 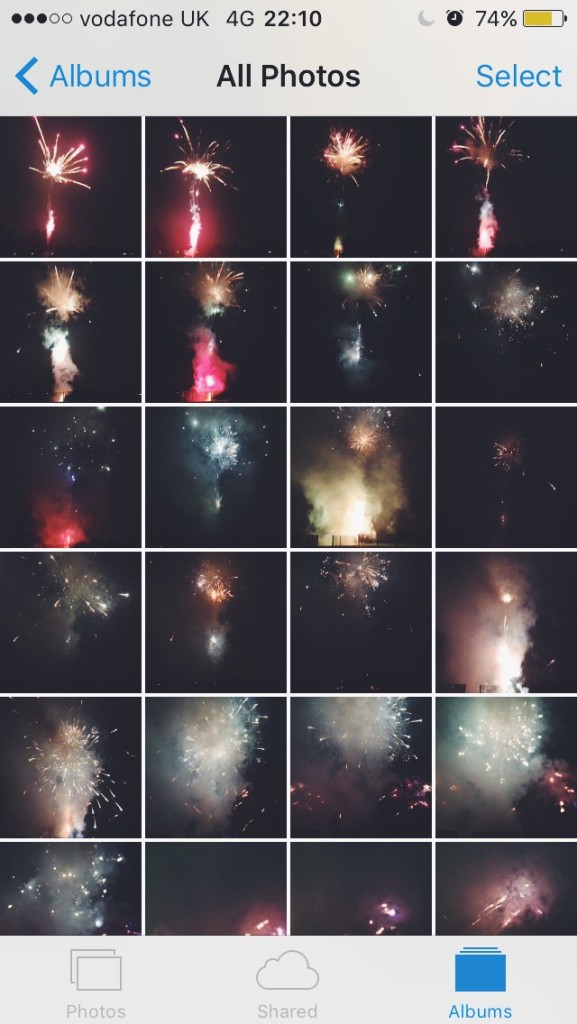 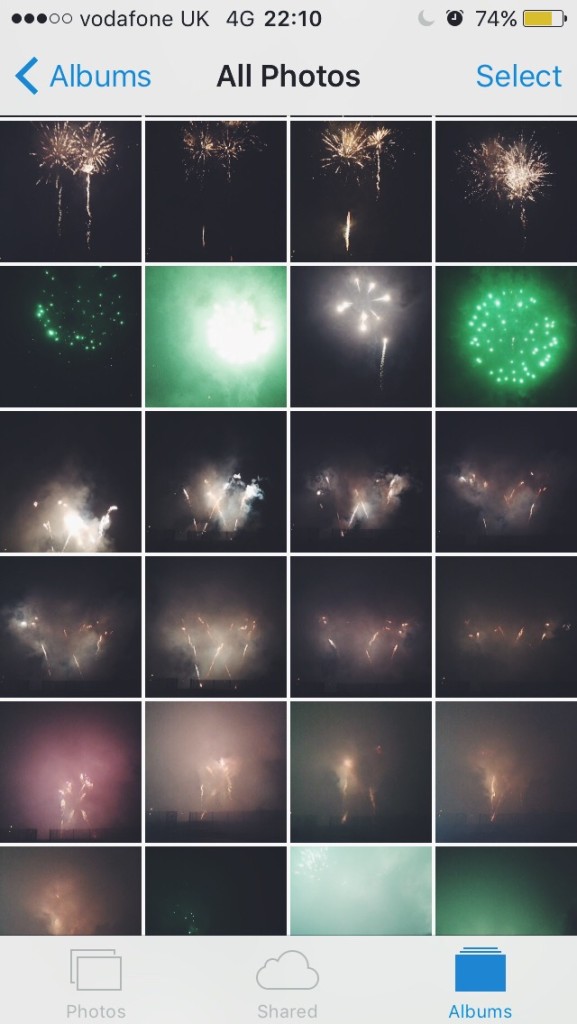 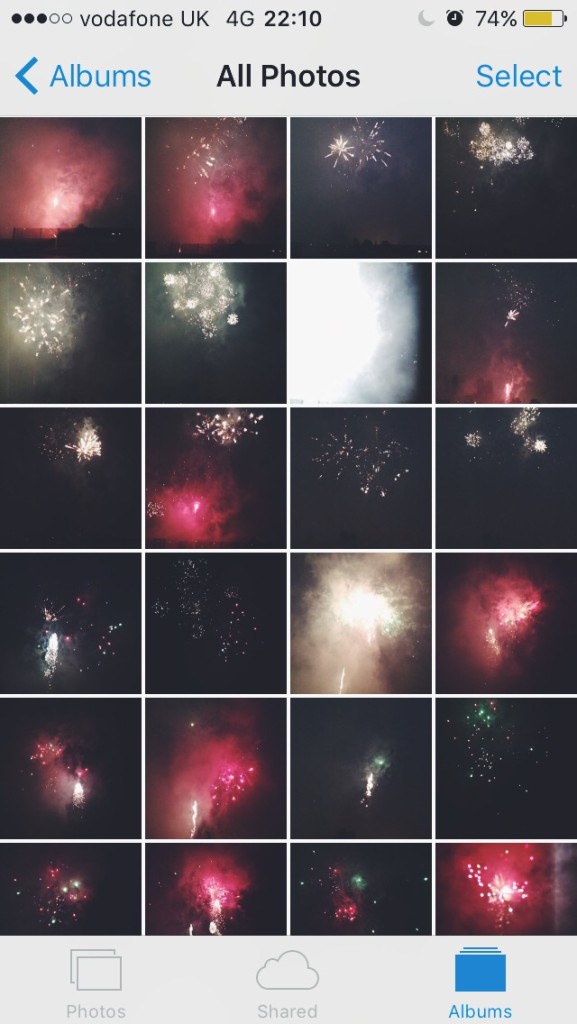 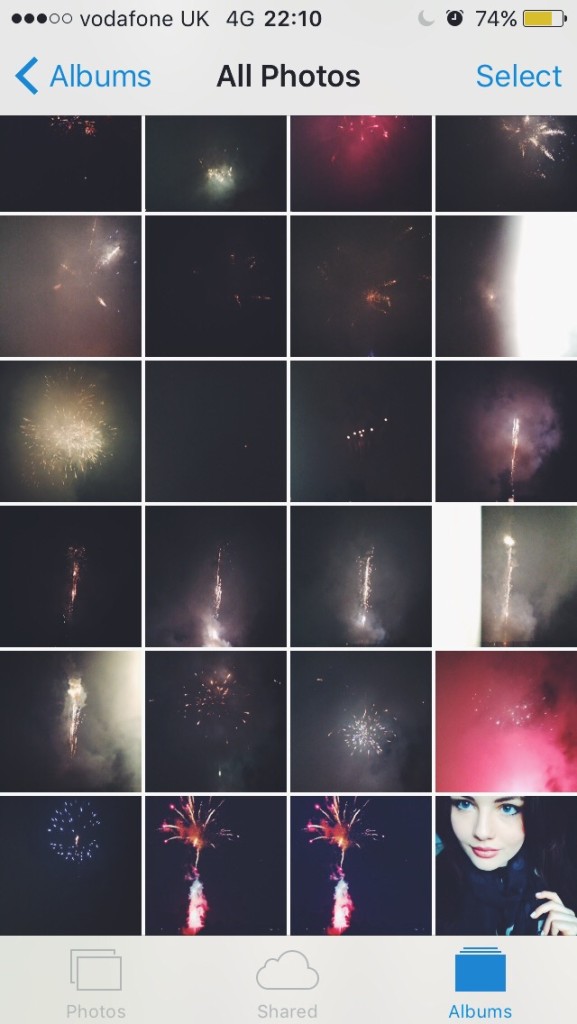 Think he wanted to make sure I had at least one. 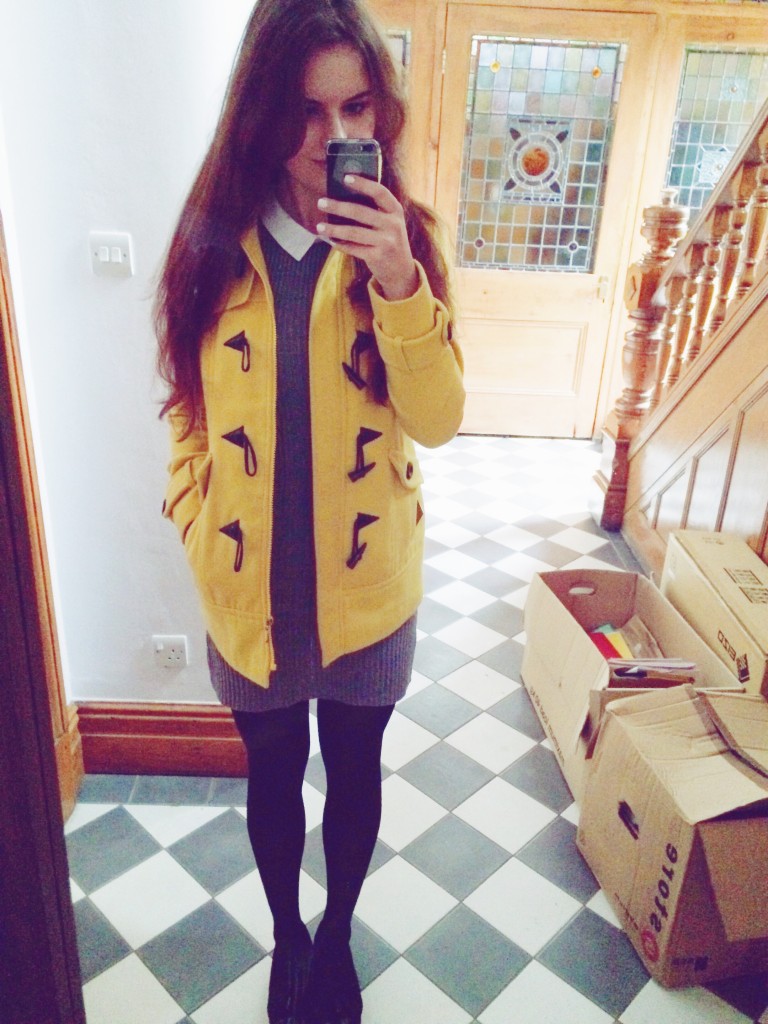 Wooo dodgy mirror selfie!  Ft. boxes because we attempted the mammoth task of sorting out ALL da books last weekend and don’t quite know where to put them all yet.  Also starring my toddler coat that I’ve continued to wear every winter since being  12. 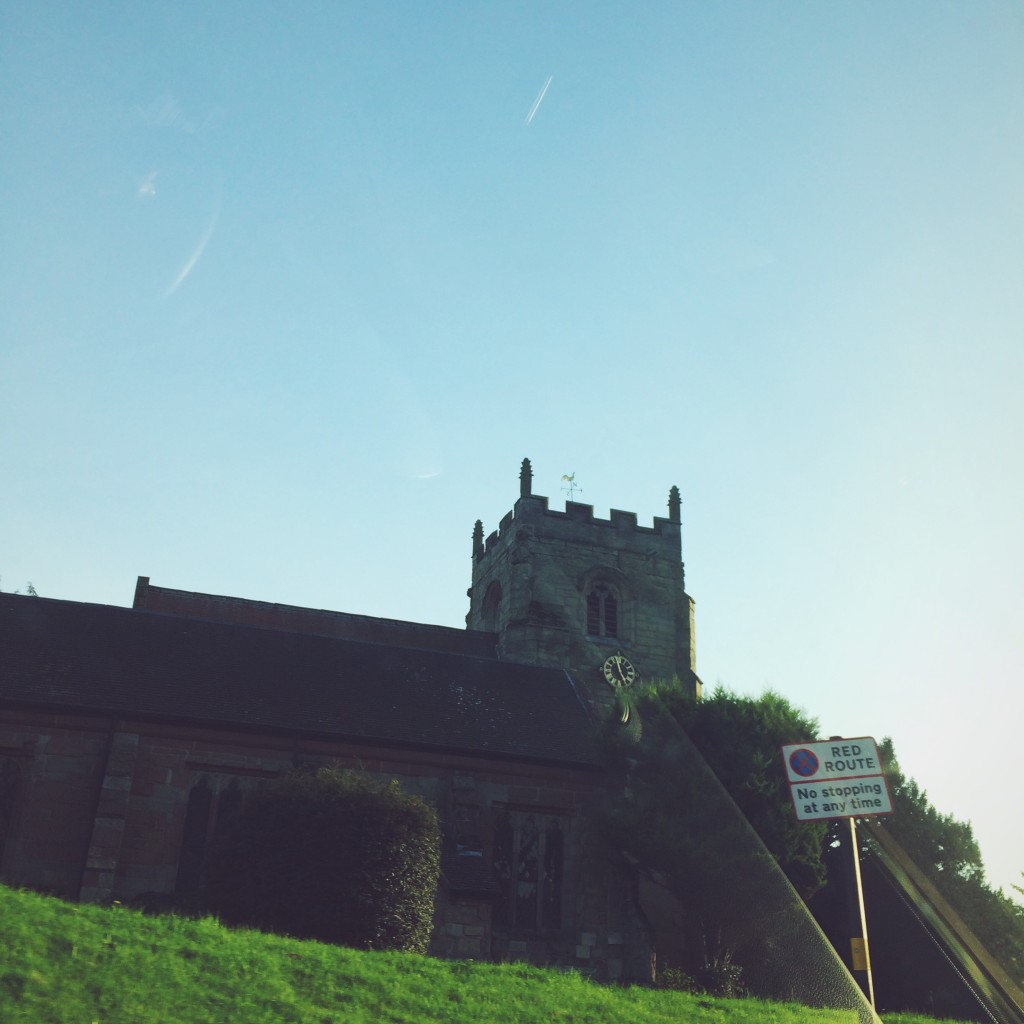 Tuesday: random church in Coventry.  I’m gadding about the UK like… someone who travels around a lot?  But only seeing snippets of the areas I’m visiting whilst en route to meet engineers.  Ain’t nobody got time for sight-seeing!  I fancied having a nosy round Coventry Cathedral as Eva – the lovely lady who picked me up and kept me company for the day – said it was pretty cool.  I didn’t quite have time to walk over before my train was due though.  Ah well. 🙂 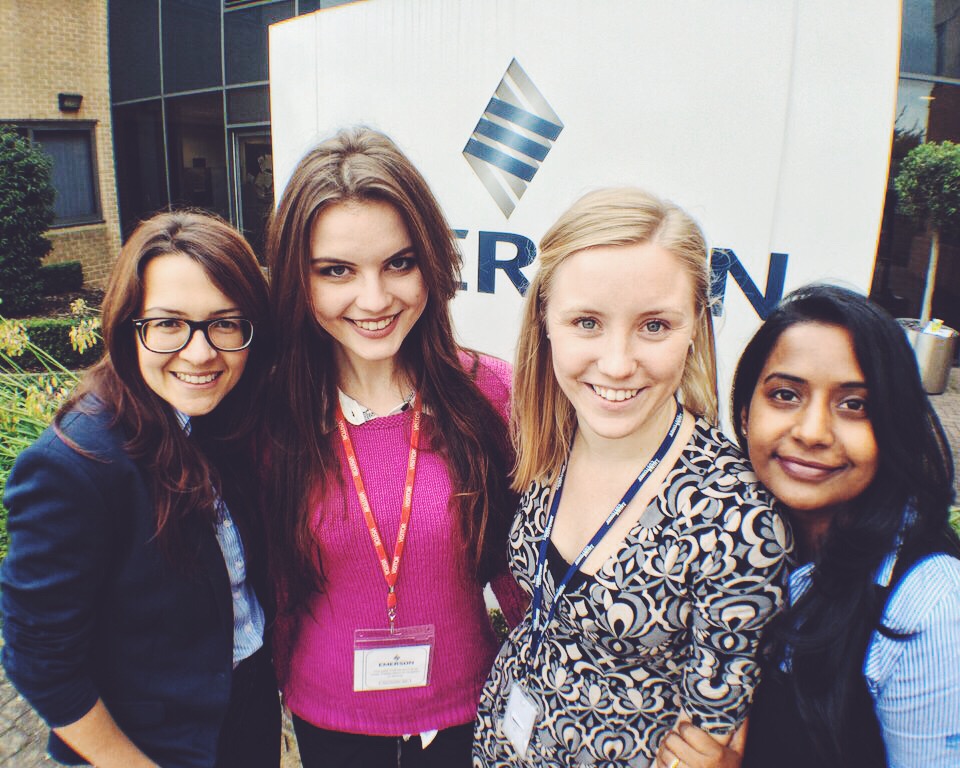 With Lorena, Harriet and Shruti at Emerson – interviewing these 3 was really fun! 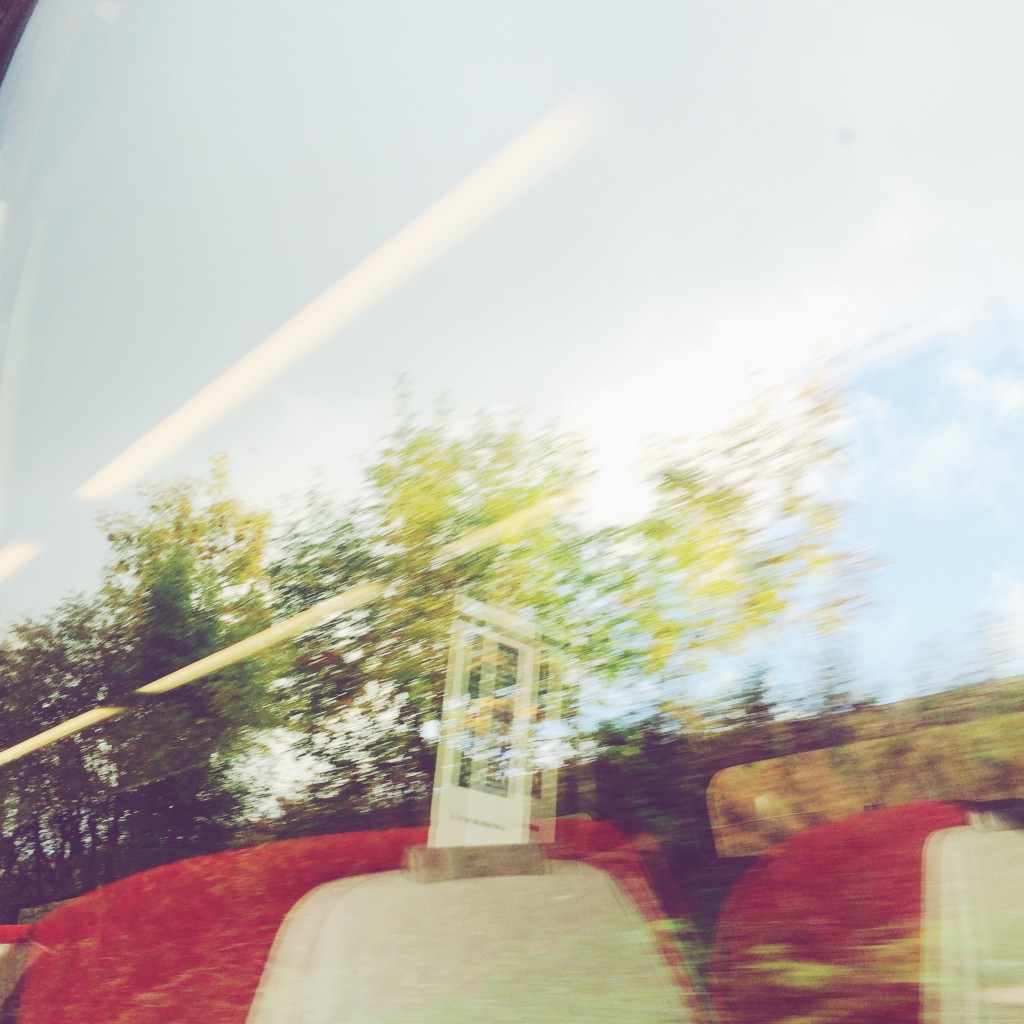 The worst photo ever taken, well done Lily!  Every time I went to take a nice snap of the countryside, more trees appeared.  Every. Single. Time.  Just imagine this as a lovely view of the Peak District, would you? 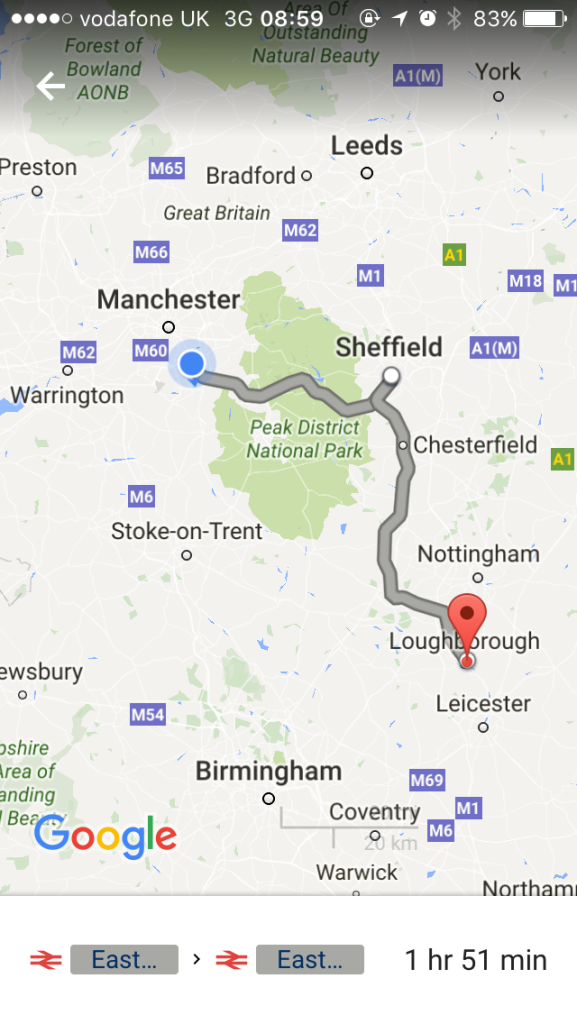 That green patch there ^, that’s where I was.  Screenshot every journey just to have the faintest idea where I actually am.  Then – because I’m super cool – I set my background as a screenshot of my journey on the TrainLine app, platform numbers and changeover times and all.  Become quite the train pro, I have! 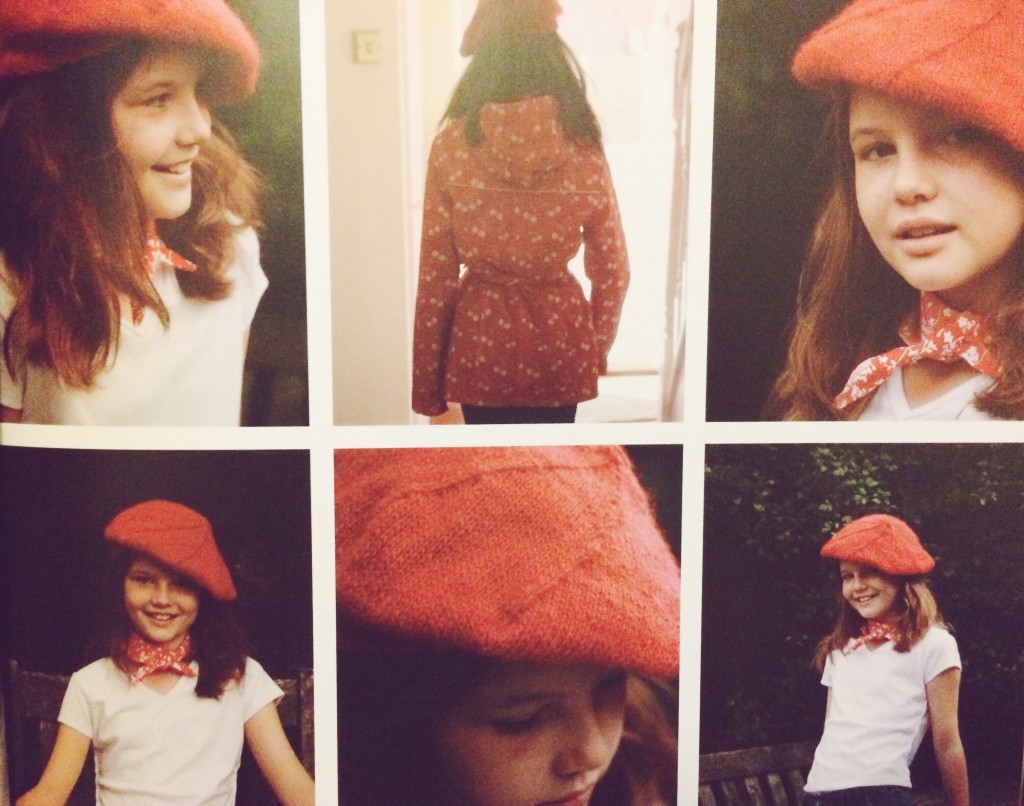 Sunday: Excuse the dodgy photo of photo pls.  Original post here from the day when I stayed up late to knit myself a beret for ‘French Day’ in year 6, if you fancy a giggle/stalk.  I came across this one mid aforementioned book sort-out.  Just tell me those poses don’t scream ‘born to be a blogger’. 😀

Not photographed: my laptop screen editing and re-editing a whole lotta videos for Tomorrow’s Engineers; post-it notes of trig identities for maths revision; shepherd’s pie c/o Dad; other ‘stuff’.  I think this ‘catch up’ was long enough already. 🙂