me and trains | misadventures in manchester 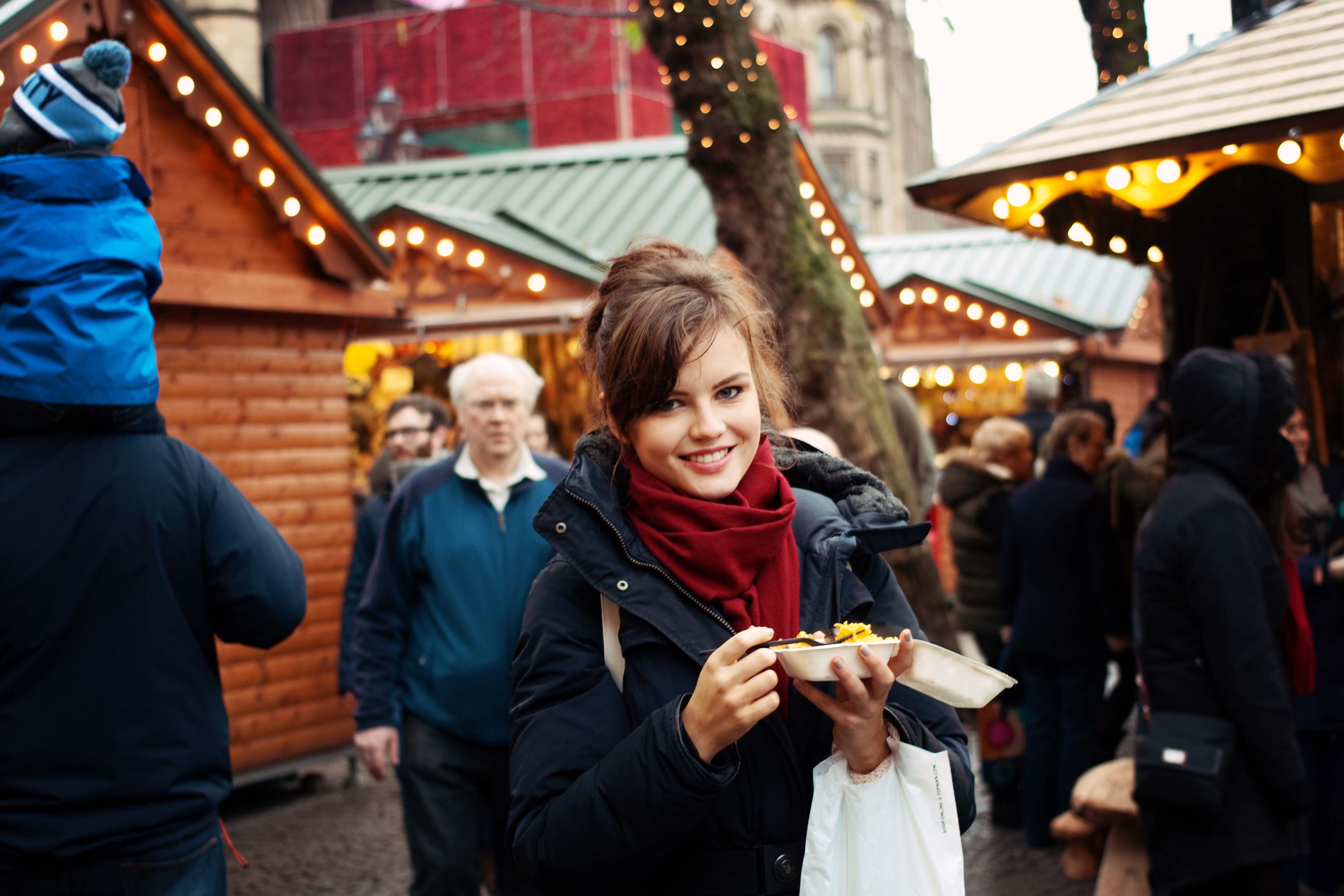 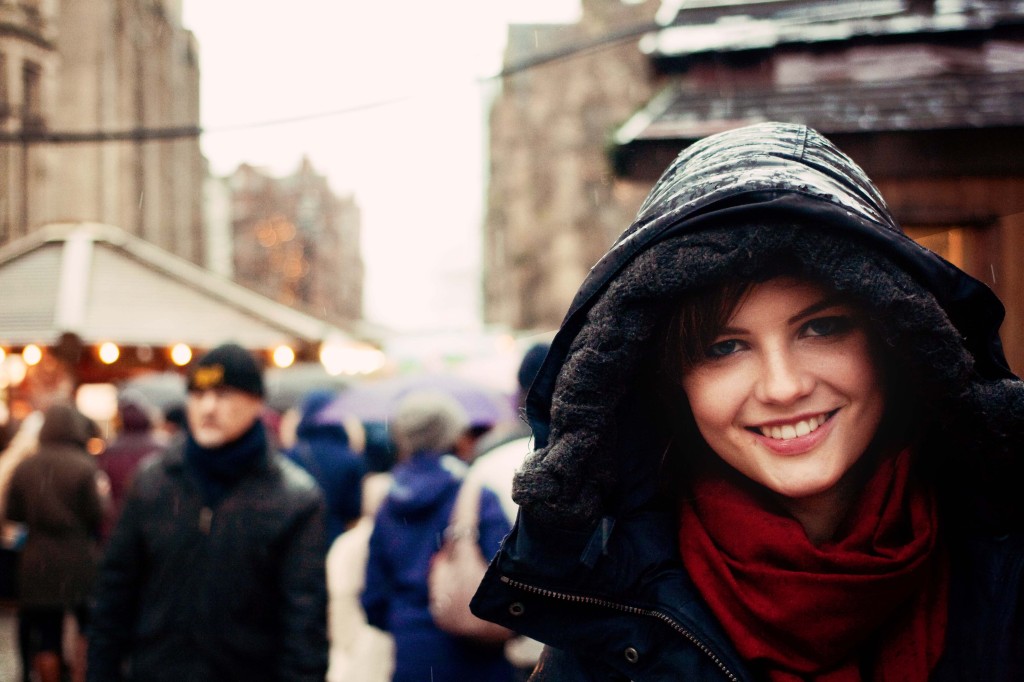 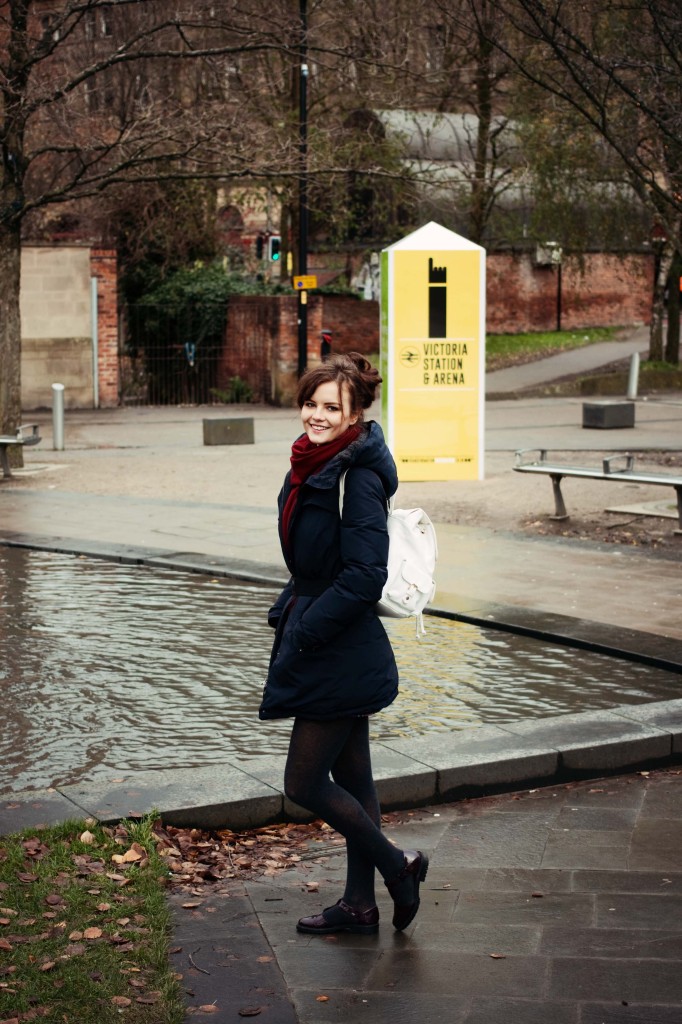 An alternative title for this post would be ‘Chronicles of Lily’s misadventures of public transport’.  More on that later.

Sunday was a spontaneous Manchester trip for me and Matty, and we had a pretty fun day out!  Bit of Christmas shopping, quick browse of the famous Christmas markets, lot of waiting in the Apple store for phones to be fixed.  (I’m still Nokia brick all the way, FYI).  As you can likely tell/predict from these photos, and the fact that this is England, we weren’t blessed with a crisp dry winters day.  Meaning I was very thankful for Duvet Coat, as it’s become known.  I almost feel like this coat needs a formal introduction; it’s been in my life for many years already and has not let me down once.  Not like any of those other pansy winter coats keeping you only just above freezing whilst the wind whips through your sleeves, and perhaps protecting the back of your head from a light drizzle.  Not Duvet Coat.  Duvet Coat is stuffed with feathers, sleeves well and truly snuggly, and has a lined hood reaching all the way down over your forehead.  When zipped to the very top, the person inside has a viewfinder approximately 2×6 inches to see through.  Ain’t no wind/rain/hail/snow any match for this one.  It’s also great if you’re going for a Michelin Man-esque silhouette, but hey, it’s belted at the waist!

Unfortunately the same ode cannot be given to these shoes.  I love the style, colour, etc., but boy did they take some breaking in to be manageable for any length wear.  Seeing as we’re titling clothing today, these are deserving of The Most Uncomfortable Flat Shoes Of All Time.  Funnily enough they’re not brilliant for sprinting in either, but again, more on that later. 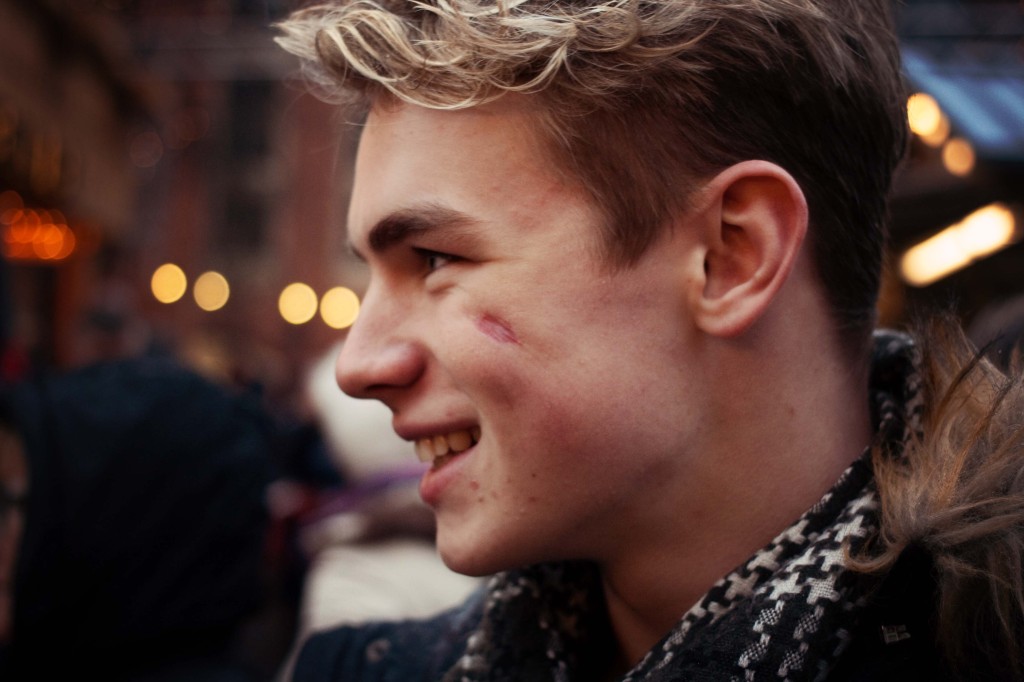 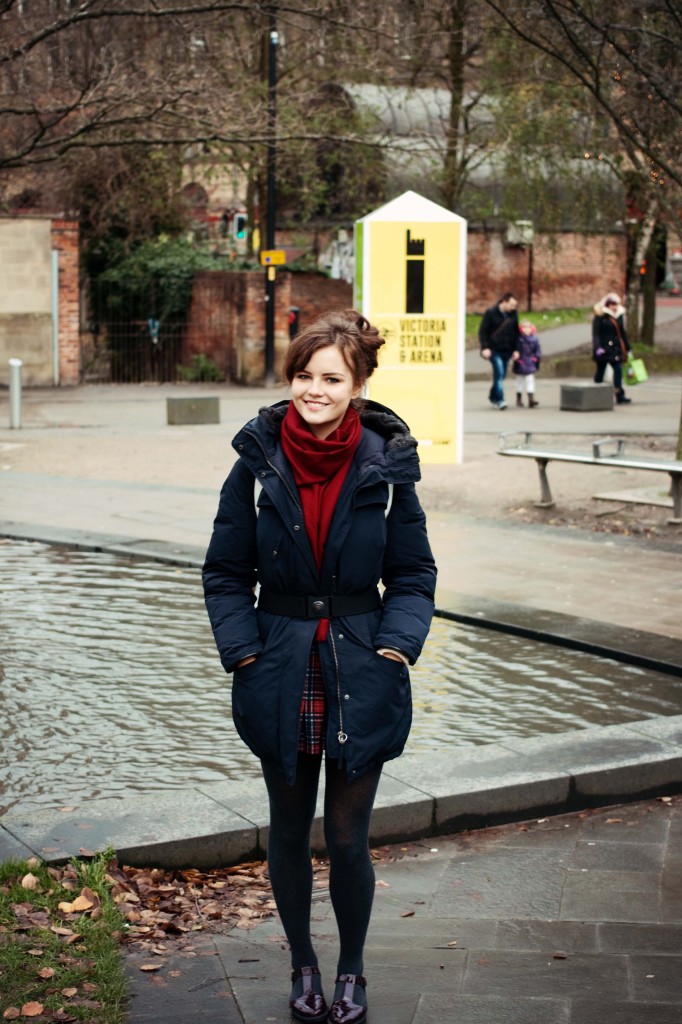 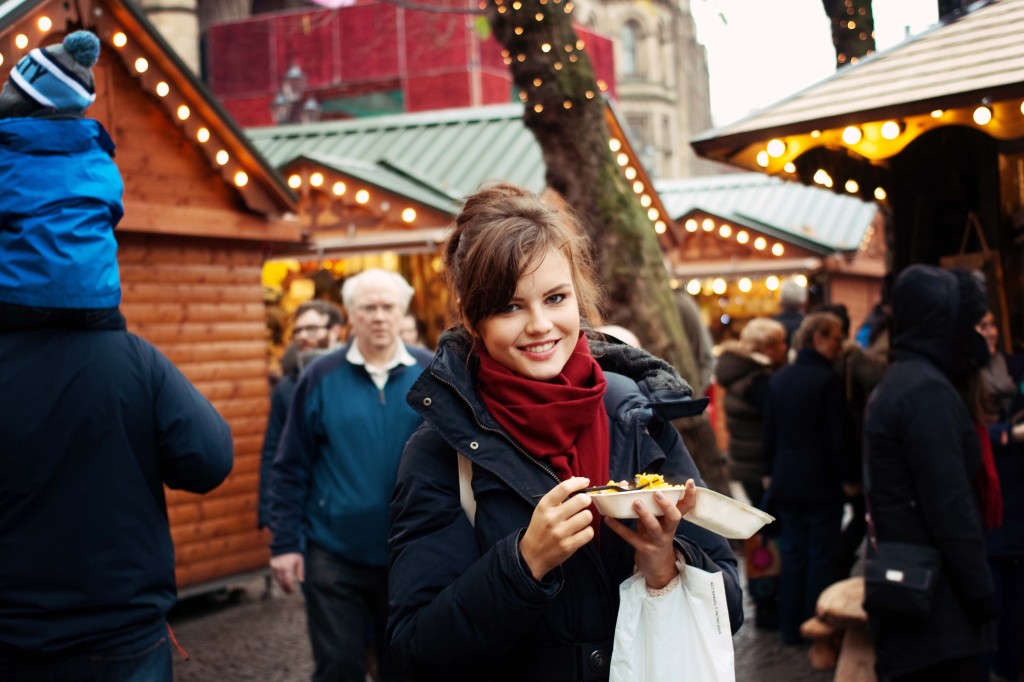 The market stalls make the cutest backdrop!  Quite a few of our photos had other peoples’ faces front and centre though, as seems to happen when you can’t commandeer a whole area just for blog photos.  Can’t help accidental photobombing though can we!  Makes me wonder how many strangers’ photos I’ve accidentally photobombed haha. 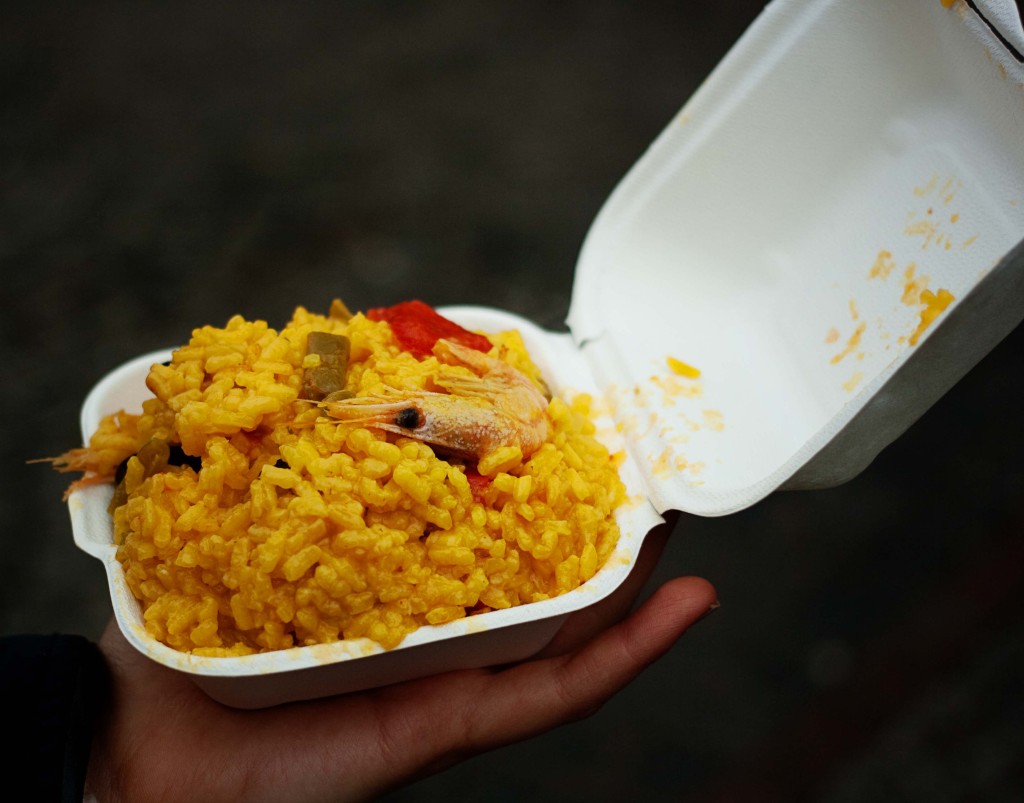 Paella for me!  Nom. 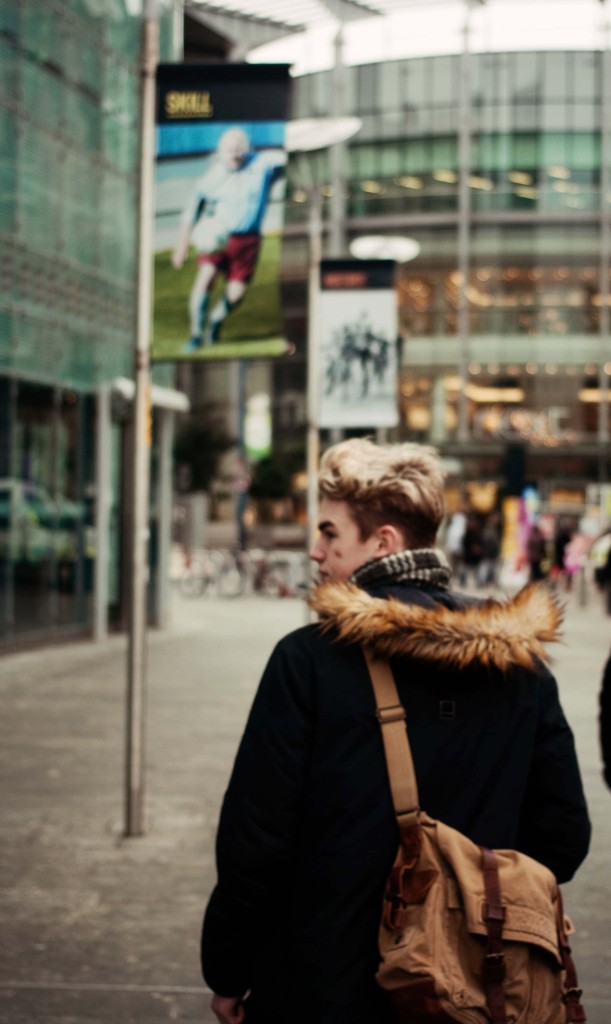 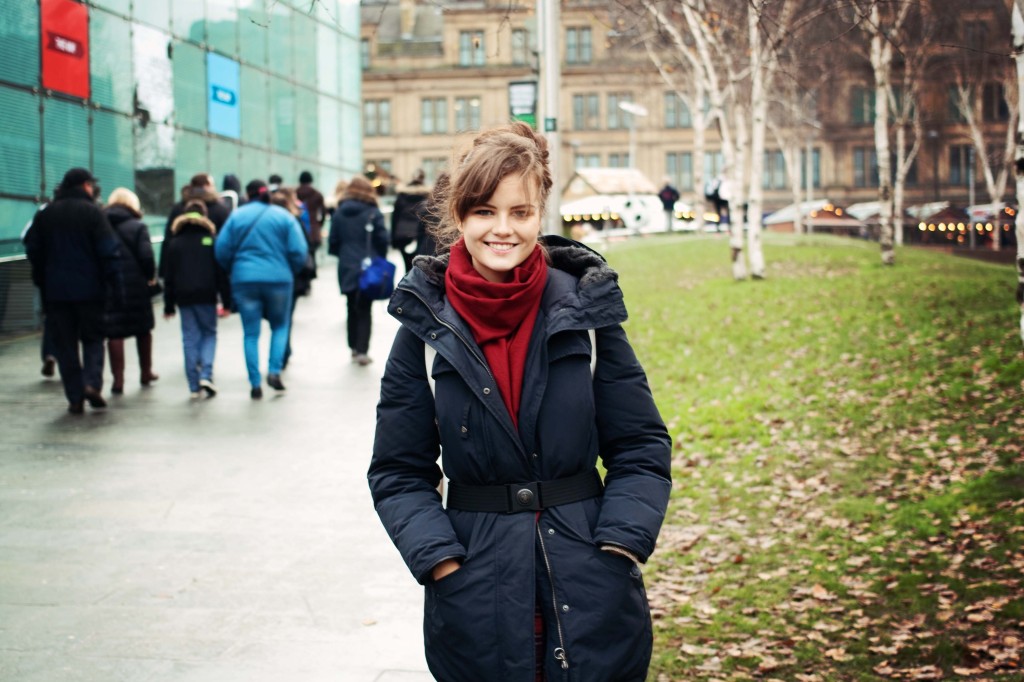 Told you I was well swaddled! 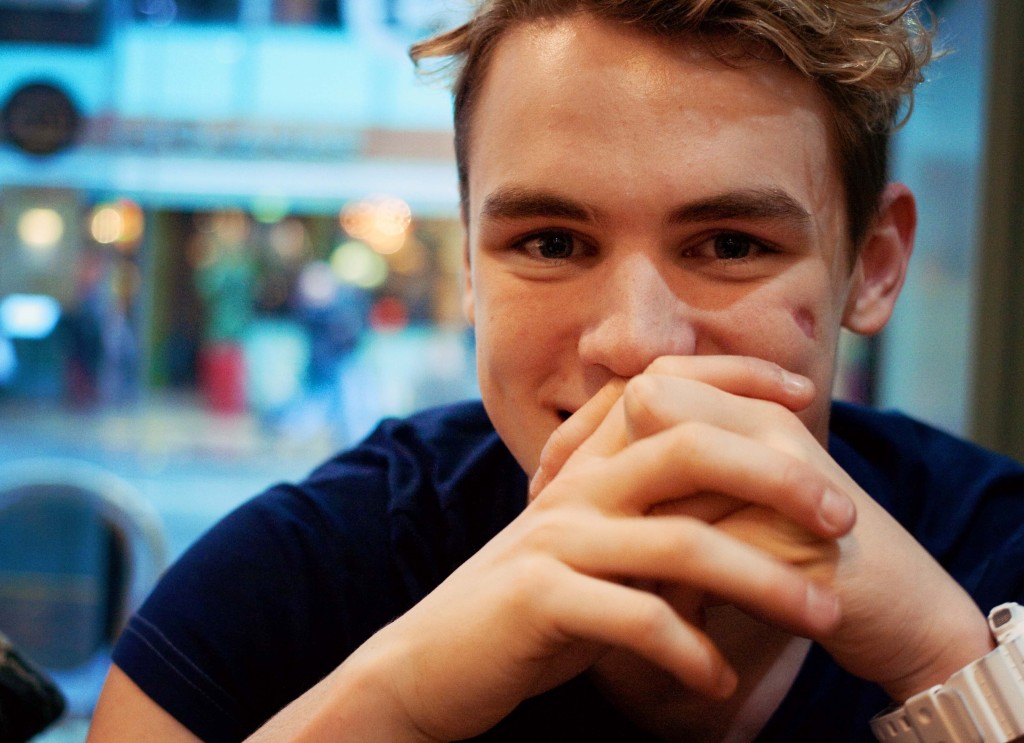 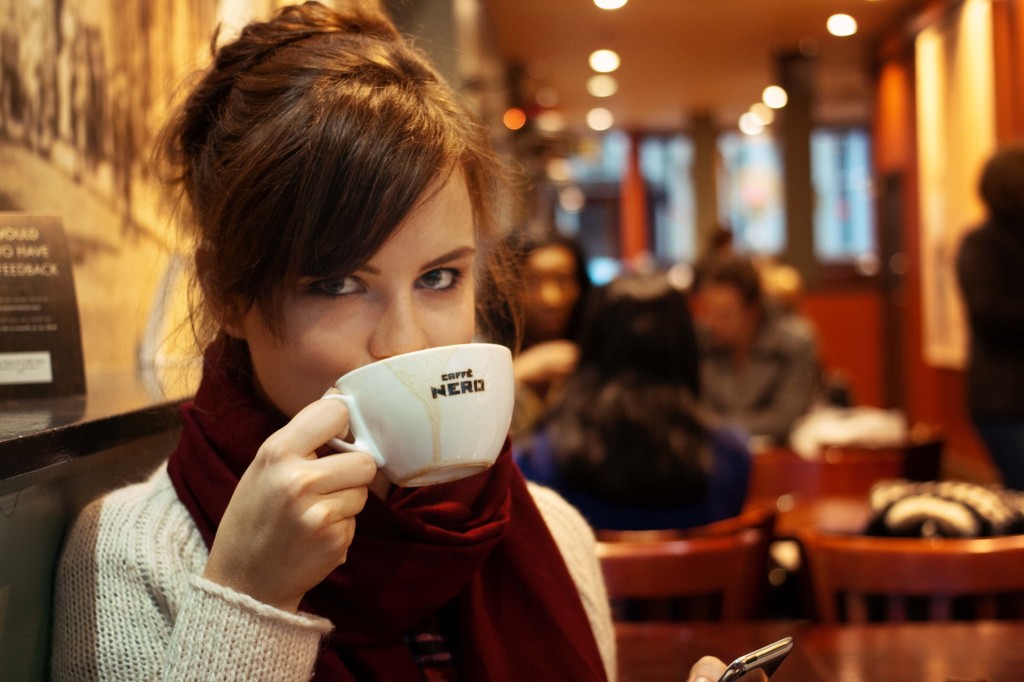 Posey as this looks, it actually wasn’t!  Certain someone was quite getting into this sneaky photography thing. 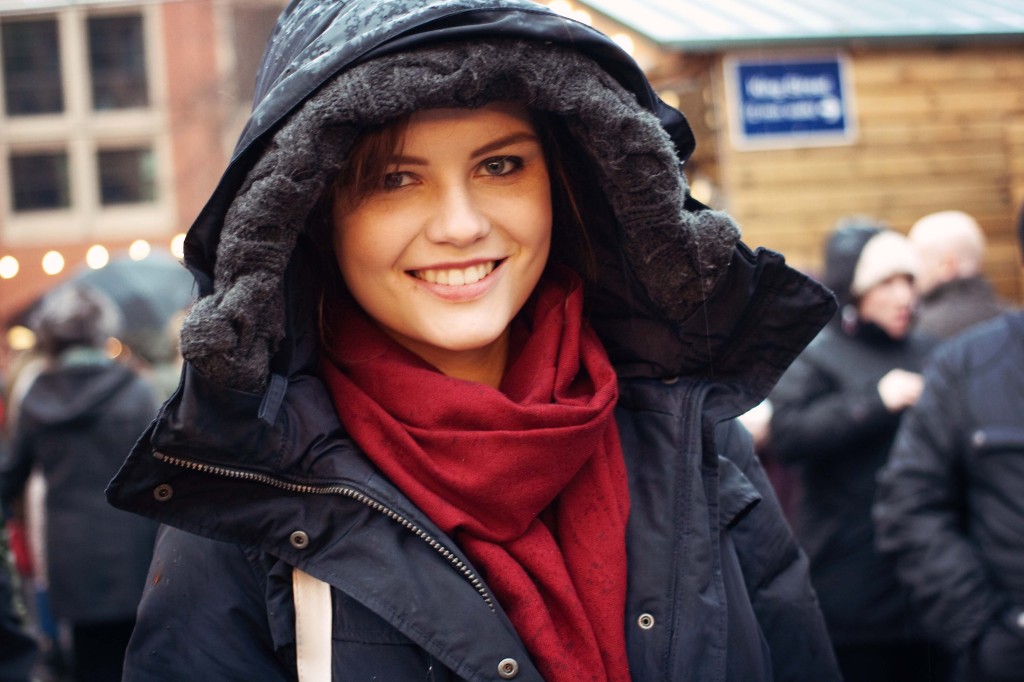 So, the misadventure.  We’d planned to catch a 2:30 train home, and headed to the Apple store at 10 to 2 just to pick up a phone.  Leaving 40 minutes just to pick something up is pretty reasonable, right?  Naturally ‘picking something up’ turned into considerably longer than we’d expected, and despite speedwalking to Victoria station, the 2:30 train was missed.  The next was due to arrive at 3:06.  Didn’t fancy waiting around cos impatient.  Next was the first daft mistake: thinking it was a good idea to try Piccadilly station on the assumption that there’d be one from there sooner.  (No 3G connection to check train times, BTW).  There was one from there sooner, we found after very briskly walking/jogging across the city centre.  ‘Sooner’ being 2:45, we discovered on turning up at 2:46.  Wasn’t our day!

Then was probably the most stupid mistake.  The next option from Piccadilly was at 3:35, which would’ve been an even longer wait than in the first place.  We umm-ed and ahh-ed for a couple of minutes before deciding to chance it and run back to Victoria for the 3:06 train.  We’d made it there in 20 minutes, we could make it back in 15!  Erm, next joke.  Absolutely legged it this time, full on Usain Bolt the whole way.  Still wearing Duvet Coat of course, and this was the first occasion I haven’t been thankful for its warmth.  Oh and Uncomfortable Shoes (let’s nickname) really aren’t made for sprinting, my god that was painful.  Too focused on making our way through the crowds of course to notice though!

I’m just imagining what any of the hundreds of shoppers we whipped past must’ve thought, seeing two teenagers red faced, soaked through from the rain, running full pelt through the markets and the general busy-ness that is a city centre 11 days before Christmas.  This was no speedwalk, this was a an all out Olympic dash.  Must’ve been hilarious.  Especially as Mr Sporty with me was always ahead and carrying my bag as I had the shopping bags, so in all likelihood looked it like he’d stolen mine and I was desperately chasing after.

Anyway, you’d think that after all this effort, we’d actually make it in time for the bloody train.  Turned out 3:06 had been the expected delay, which it had made up somehow (?), and therefore arrived at 3:03.  We flashed our tickets at the ticket guys at 3:04, thinking we’d just made it (the train going from the platform furthest from the entrance, OFC) only to watch it pulling away.  You have no idea how annoying that sight was.  Yep, that was our third missed train of the hour.  This was one of those times when you immediately regret every moment spent deliberating and curse every pedestrian who dared to take their time window shopping at a leisurely pace, how very dare they!  Some of us have a train to catch don’t you know!

Anyway, the next from Victoria was at 3:23, so two sticky panting teenagers piled themselves and their baggage onto a waiting seat.  I have no photos of myself with a wet curly fringe slapped to my head, the most out of breath I’ve been in a long while!  Jeez I thought I was fit until then… I can usually jog for an hour straight, but that 1.62km – Google Maps’d it when I got home – really finished me off.  So yeah, it wasn’t exactly a life changing disaster being an hour later than usual, but I felt the need to tell you all.  This is vintage Lily for you. 🙂

I’ll let you decide the moral of the story!