a new bedroom & a lotta love for navy 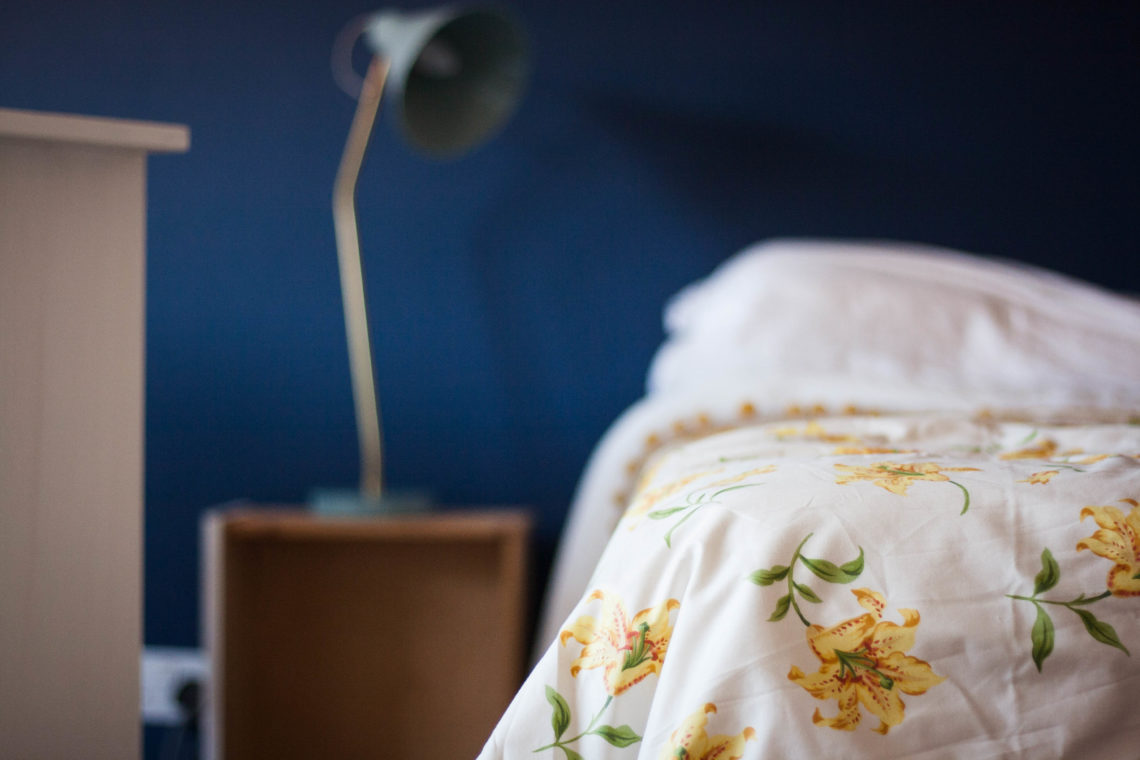 You’ll know if you follow my Instagram because every caption lately seems to mention paint in some shape or form, but I realised I hadn’t actually mentioned anything on the blog – so yes, moved house!  Last week!  All a bit last minute!  Hopefully that explains the blog hiatus.  I had a couple of trips to London and Yorkshire for modelling shenanigans and have been to and fro to Manchester as usual, but other than that, this housey malarkey has been taking most of my time.  This gal has been painting, and carrying boxes, and driving backwards and forwards (we were adventurous and moved a mile down the road, you see) and hanging off stepladders and all that jazz.  Very exciting round these parts.

I’ve received a few Insta DMs asking if I’ve moved into my own place but nope, not yet and won’t be doing any time soon!  Still living with parents and am perfectly happy to do so for the foreseeable.  Most people I know live with their parents well into their twenties anyway and I’m in no rush to change that.  I’m still a student and millennial spending all my money on avocado and cocktails, after all (I joke… kinda).  It’s nice moving at this age though because you get to have a trial run and figure out which décor styles you like and *might* use when you eventually move out at some point in the next 10 years or so.  In my case where my mum and I do most of the umm-ing and ahh-ing together, anyway, and have the exact same taste in pretty much everything.  Funny how we hadn’t really considered much décor-wise previously, but now half our conversations seem to revolve around paint swatches and renovation Instagram accounts.  I never realised choosing between shades of white and beige could be so bloody difficult, put it that way.  The aisles of Homebase and Wilko are becoming my second homes and I could recite the shades of Dulux if you asked me, something I sure as hell couldn’t have claimed a month ago.

I got lucky on the bedroom front again (multiple interpretations for that one but we’re talking strictly square footage and an en suite right now) so obviously wanted to make the most of it, and I had a complete blank canvas to start with as the house was completely empty.  So of course Pinterest was my first port of call.  Of course.  I’ll throw a Pinterest board together quicker than you can say ‘white walls’, y’know.  It’s a loft conversion like my last bedroom and the back wall (whatever you call it) was calling out to be a feature of sorts, so I didn’t waste any time on that one.  Originally I thought I’d go for a pale blue, then considered a soft neutral, then realised that because it’s not *madly* bright in here they would probably just look like sludgey grey on all but the sunniest of days.  So the natural conclusion was to think ‘sod it’ and go boldinstead.  A decision prompted by Pinterest and falling down an interiors Instagram rabbit hole, that is – I’d never have thought a dark bedroom would be for me but oh they look so good.  With just the one wall that is.  This particular navy is Dulux Sapphire Salute and I love it rather a lot.  My whole fam liked how the dark wall looked in here and we’ve since gone for a charcoal in the dining room too, which I have to say looks pretty fab too and will no doubt be used as a backdrop sometime soon.

My ‘Décor’ Pinterest board shows the evolution of my ideas but I still have no idea what the final room will look like.  I originally thought this IKEA Brimnes headboard with built in shelves would be a fab place to store my books and place lamps, prints etc., but have since realised it’d make my bed jut out too far into the room so that idea was swiftly scrapped.  Headboard-less bed on wheels that scoot across the room when you sit on it is doing the job for now.  Fab for moving around easily, not so fab when your pillows disappear down a crevice at 2am.

You’d think I’d planned the yellow and matched my tshirt to my bedroom for good measure, but yellow has been more of a happy accident.  The throw surfaced during the move (in my Nan’s loft, of all places) and was apparently given to my mum by an interior designer friend when the person who ordered it hadn’t claimed it – because it had Lilies on it and a 2 year old Lily would greatly appreciate that novelty, you see.  Turns out a 20 year old Lily appreciates it also.  Co-ordinates nicely with my little orchid gift too so yellow it is for now.  That’s exactly how my mum and I said we wanted the whole house to be – not pre-planned everything matching, but a slow evolution of things we uncover, repurpose, upcycle and buy as we go along.  Just feels nicer than choosing a matching range from a catalogue, no?

And that’s about all for my little update!  About to go to bed in a room with a faint whiff of furniture paint and half my clothes still missing.  Evidently I think I’m an interiors blogger all of a sudden given the length of this post so shall post updates when all is done!