even busier (the lily diaries) 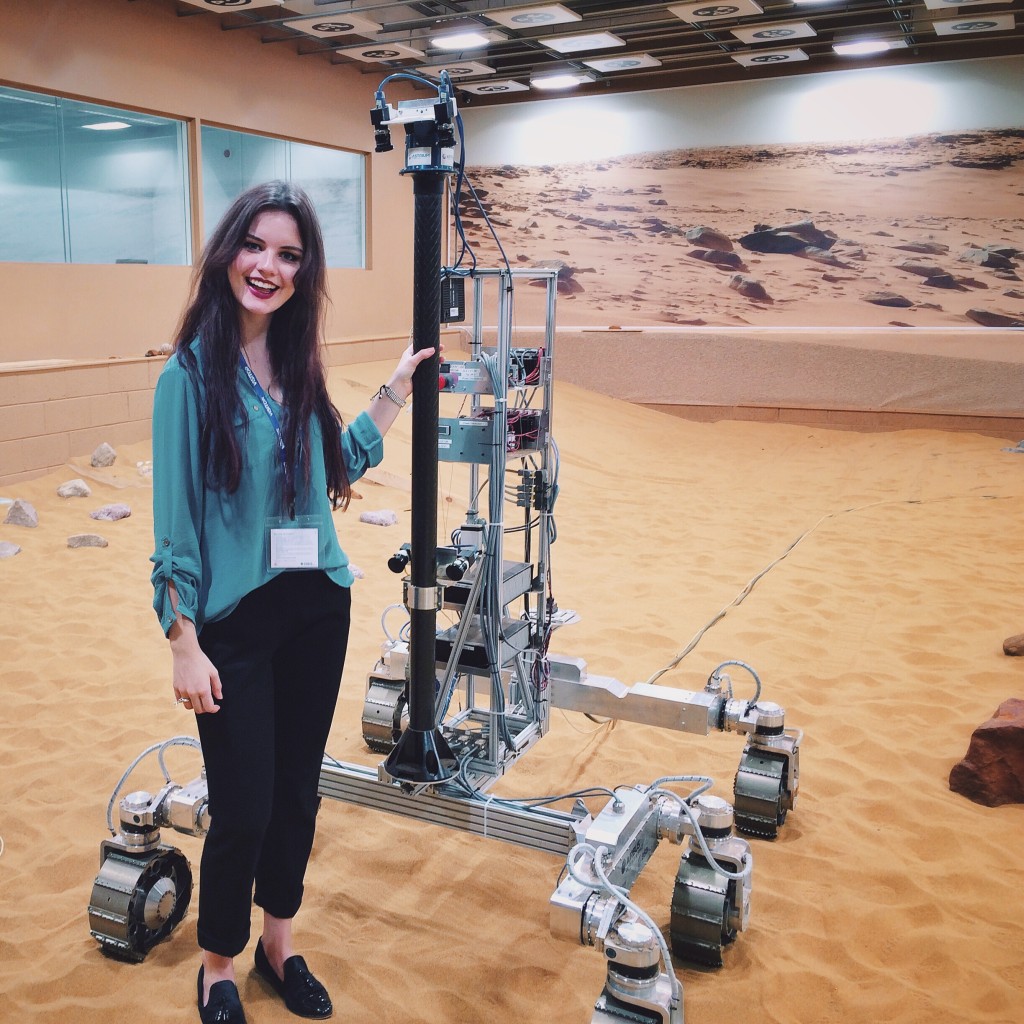 How about a diary blog post for today?  I’m fairly nobody cares about my life that much but I’m gonna tell the story of yesterday anyway. 🙂  Days like these are the ones I don’t want to forget the fine details of because well, it’s all life experience!  (I’m currently a vlogger for Tomorrow’s Engineers Week 2015 btw, just to make a little sense of it all.  I get sent to meet people and ask them questions and make YouTube videos of it 😀 ).

7:30am: Salmon and cream cheese on crumpets for breakfast, courtesy of my hosts down in London who put me up for the night to make all this travelling lark a little easier.  I’ve been pretty lucky with the people I work with!  Who knew taking on an intern would involve taking them into your house too eh?

8:30am: The busiest tube station I did ever see.  I’m sure it’s everyday stuff for most Londoners, but the craziness of this place still gets me!  Literally packed like sardines we were.  (Apparently Yoda speak is my thing now???)  I didn’t even need to hold onto anything to stay upright – the mass of people squishing left right and centre took care of that one for me!  So yeah, we were crammed soooo close and yet everybody was in total silence, which I found pretty weird.  So many people, so quiet!  I just kept laughing with Kari and probably made a spectacle of myself by vlogging, but oh well.

9:30am: Couple of hours in the office consisting mainly of emails, drinking tea and figuring out what goes where in the calendar. Easier said than done, looks like I’ll continue to be a busy gal for the time being!

11:40am: Off to Euston again for me for my first interview of the day!  I’ve done that tube journey a few times now so I know where I’m going, and I found the Network Rail place easily.  Can’t really miss it, as you’d expect.  Rain had frizzed up my hair and given me that drowned rat look though.

12:30pm: Lil’ minor confusion with exactly who was meeting me where, but all worked out ok in the end.  Jane Simpson  (Network Rail’s Chief Engineer) was super friendly and great to interview!  Once I’d got the damn microphone working, that was.  Turns out no amount of checking kit both the day and the morning prior makes any difference – kit will still refuse to work when you need it.  Chief Engineer’s expert advice:  take the battery out and back in again.  Which worked, obviously!  But yes, Jane was so friendly and had loads of really good advice.

1:20pm: Wandered around Euston taking a few ‘filler’ clips, bought some lunch, ate said lunch at Euston, made my way over to King’s Cross.  Never been there before either but that’s such a short walk that even I can’t get lost.  Bag was feeling pretty damn heavy by this point though! 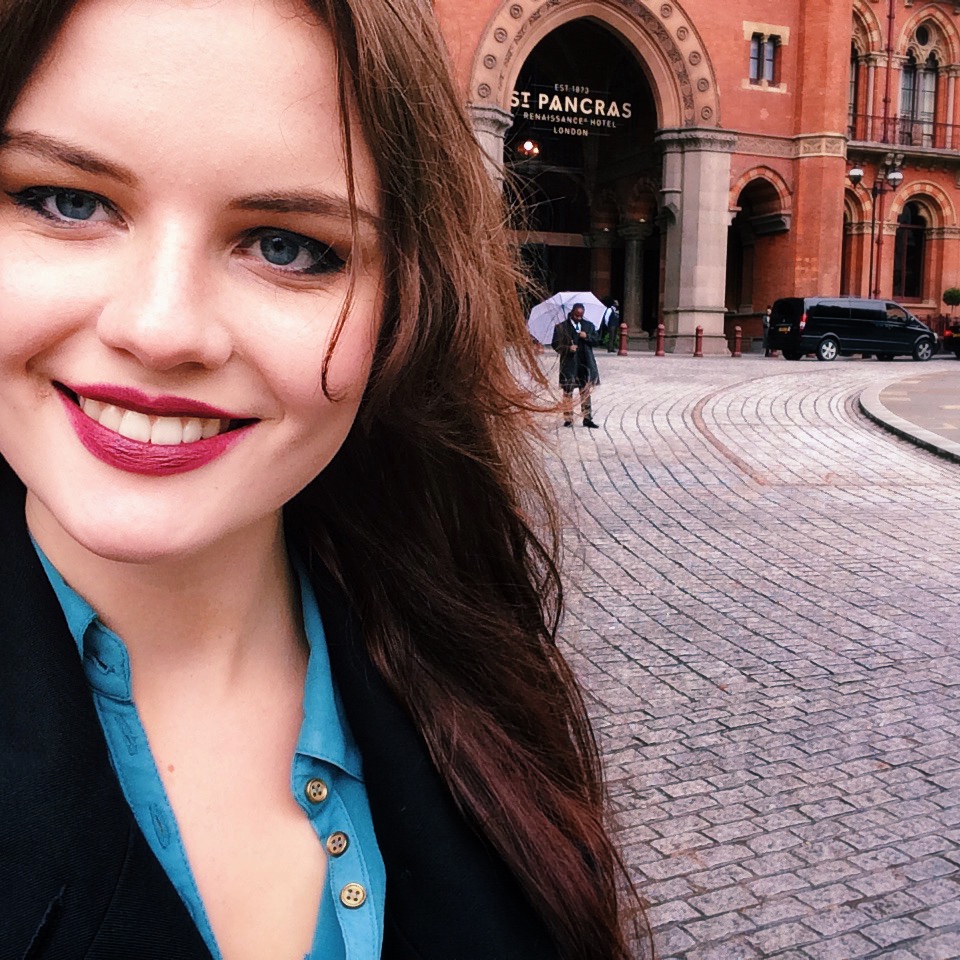 2pm: Collected tickets at Kings Cross; gawped at the ceiling for a little while.  I had an hour to kill and remembered I’d passed the British library so thought that would be a decent place to sit down and have a nosy at.  Then the iPhone problemz began!  I tried connecting it to the laptop – nope.  Tried charging it – nope.  iPhone was not playing ball.  iPhone in my possession solely for the purpose of making videos, that is.  Right before I had to film an interview, on the frickin iPhone!  Fabulous time to refuse to charge!  So there I was, in the massive British Library, plugging and unplugging the same 2 leads about 50 times and getting in a flap because the 46% in the corner was not changing.  Probably looking like a yokel northerner who’s never seen a plug socket before.  Oh yay. 🙂

3:10pm: Switched the obstinate iPhone off, popped it in my pocket, made my way back to King’s Cross (not vlogging by this point, obvs). 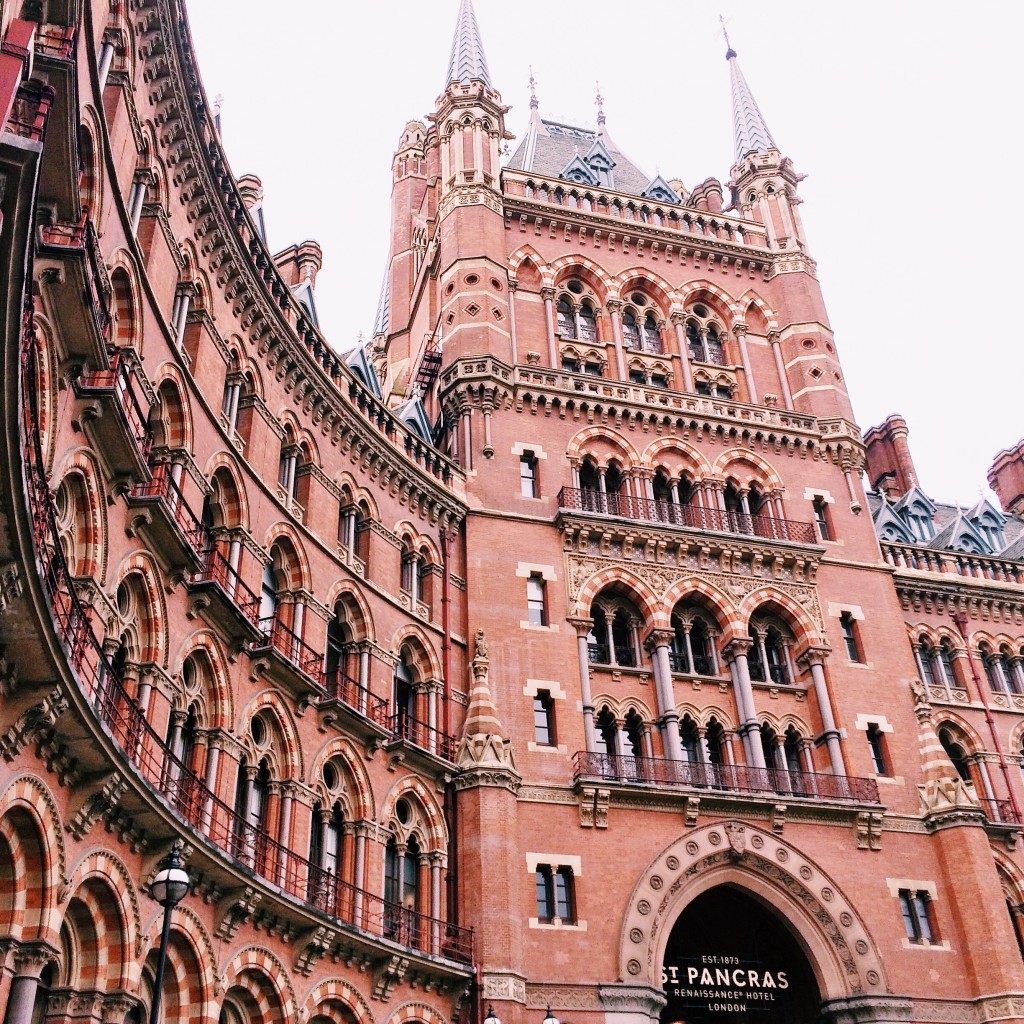 3:35pm: Ermm, well… I got on the wrong train.  You got a feel for my luck yet?  Wrong Train happened to be leaving at exactly the same time, to exactly the same place as Right Train, but Wrong Train was a slowcoach.  Literally.  I found out when after 20 minutes I was surrounded by 12 year old girls and NOT where I was supposed to be.  How the hell was I supposed to know that Right Train had an evil (slow) twin?  Ugh.  I’m being melodramatic of course – I still ended up in the right place (THANK GOD) – just a wee bit later than expected.

4:25pm: Off the train and en route to Airbus Defence and Space.  SOOO COOL, but more on that shortly!  Thing is, hopping off a train into an unfamiliar city or town with signposts and shops and people and things like that all around is one thing.  Hopping off a train into an unfamiliar town in some kind of industrial estate/retail park hybrid with barely any sign of life around, is another.  Add in pouring rain, a flimsy brolly flipping inside out, arms dropping out their sockets from a lugging a heavy bag round all day, and being half an hour late, and you have one chilled afternoon!

4:35pm: Eventually found the visitor’s entrance at Airbus, showed my passport, signed a form or two and was met by Abbie, a ‘Spacecraft Structures Engineer’ and all round lovely lady.  Who’s day job involves working in ExoMars Rover Vehicle Team, as you do.  Standard stuff, for some!  She took me on a whistle-stop tour of Airbus, showing me satellites being made and all sorts of really interesting stuff that I wasn’t allowed to film, for obvious reasons.  I loved it!  Then I was taken to the testing area for the Mars Rover where I was allowed to film, so our interview was in and around there.  I’ll not go on about it too much as all the interviews will be on YouTube in the next couple of months!  Needless to say I had a fab time and learnt lots. 😀 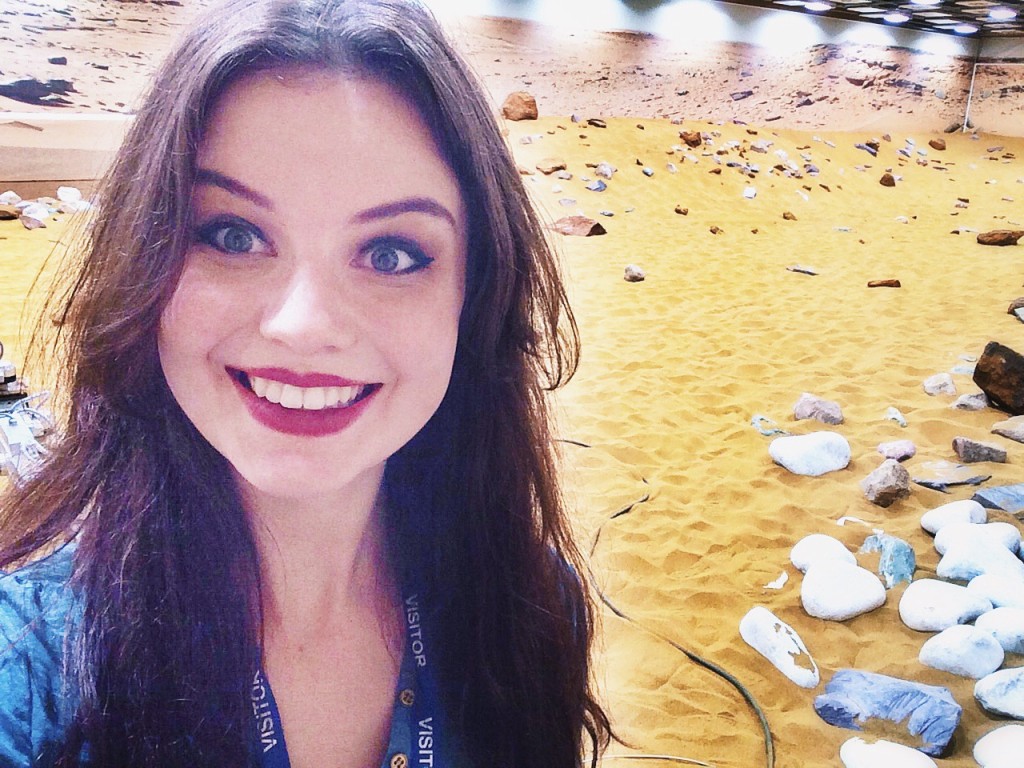 6pm: Short-but-sweet visit to Airbus was over I *thankfully* made it back to London on the right train and all (go me!). 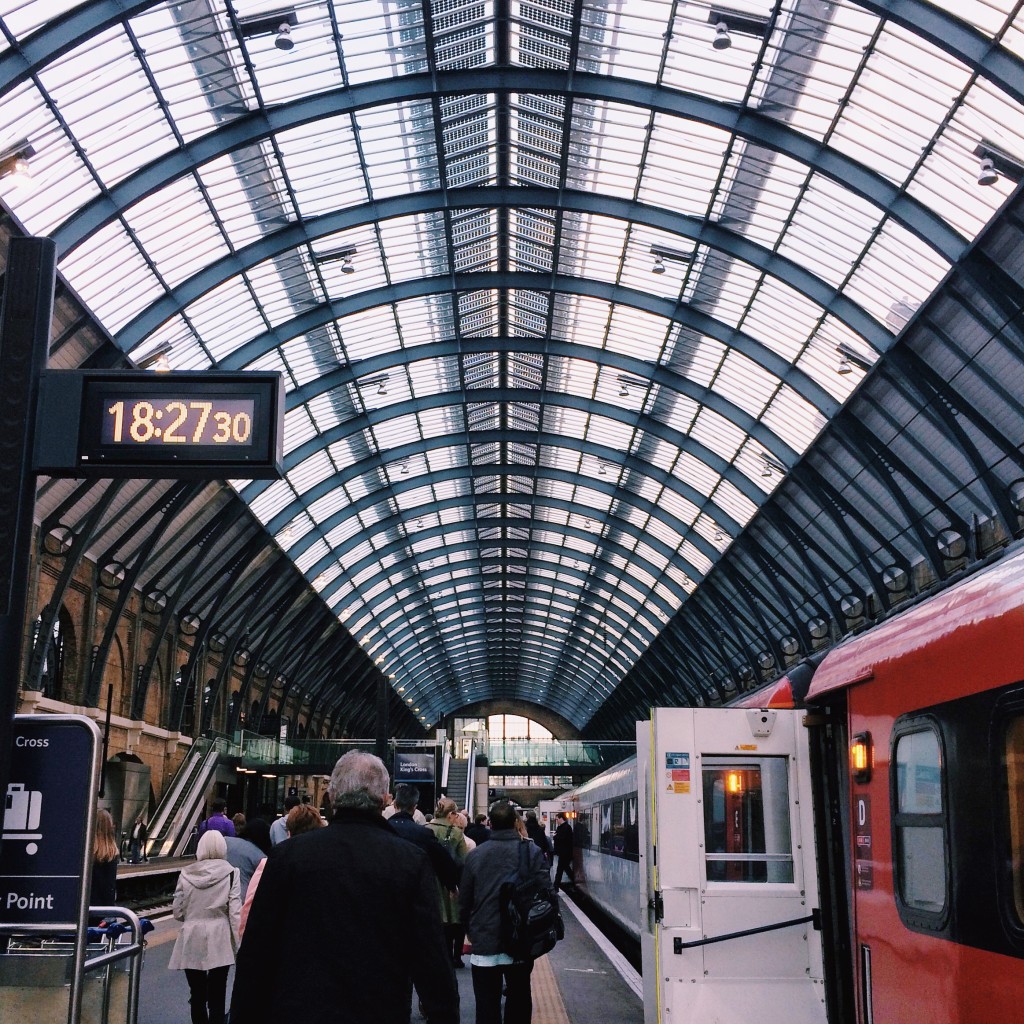 6:30pm: Plenty of time to struggle hunting down food that was A) not extortionately expensive and B) hot.  To then find not one empty seat in Euston and end up eating beef chilli and rice from a plastic container whilst sitting on the floor in the station.  The London life, eh?

7:30pm:  More train!  Physics and history homework done on the train because I gotta fit being a full-time student in there somewhere too, lol.

And now I’ve written a 1000 word account of my day!  Y’all will have a vlog of it all to look forward to sometime soon too!  If you made it this far I think you should tell me something about your day as payback. 😀