GoPro | stuff I wish I knew 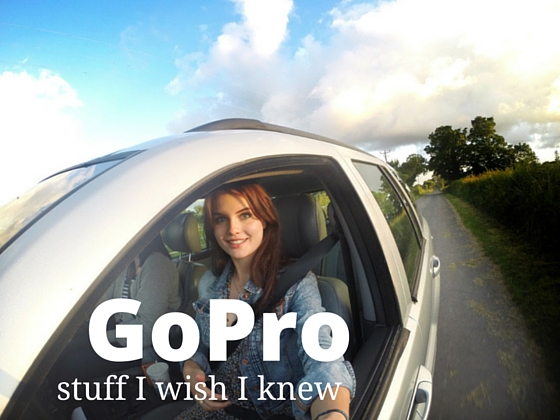 I’d never used a GoPro before filming this video.  Safe to say I knew absolutely nothing about how to work one, how to get the best shots, or how to edit footage!  So, as you’d expect a complete novice to do, I scoured Google and Pinterest and YouTube for some pointers before my GoPro arrived, in the hope that being forewarned and forearmed would mean I could create a video that didn’t seem too amateur.  Hopefully.  I’ll leave you to decide that one.  Of course I still made a ton of ‘mistakes’ and with hindsight can see loads of things I could’ve done differently/better, so I thought I’d list them so that others can learn from mine.  Plus a few of the tips I found most helpful from my internet scouring.  Please bear in mind that I’m often a complete idiot who’s exceptionally slow at spotting the obvious here!

You can have good sound OR waterproofing, but not both.  Which seems pretty obvious in hindsight, but silly Lily only realised that one after recording a bunch of vlogs.  And by vlogs I mean white noise and rustling, with a faint voice yabbering on in the background.

Make sure your GoPro is set to 100% ‘beep’ volume before going near water.  Water is noisy, duhhh!  No sound + helmet mount = no idea if you’re filming or not.  Therefore multiple shots of people trying to check the screen, and missing what could’ve been good shots but you turned the camera off rather than on.  That beep would’ve been so helpful when canyoning.  Stupid Lily!

Swoop in and out of shots.  The swoops make things flow a bit smoother when it comes to editing.

Try to keep the GoPole out of shot.  Seems ridiculously obvious I know, but I only realised afterwards that the pole (selfie stick) was visible in quite a few of my frames where I was filming myself.  There’s a certain angle at which you can tilt the camera so that it doesn’t show.   I’ll pay more attention to that angle next time.

Turn upside down setting on, and steady the camera using the back of your hand.  For ‘swoopy’ shots.  It’s much easier to create a kind of mini-steadycam using the pole than to hold it like a regular camera, what with the GoPro being so tiny and that.  OK so that probably doesn’t make sense… very difficult to explain in words!

Holding the GoPro down by your ankles with the GoPole extended (whilst walking) is an easy shot.  Hence multiple shots of boots in my video.  Looks cool when going through puddles and stuff!

Use an IKEA kitchen timer for panning time lapses (hyperlapse).  Can’t remember exactly where I first saw this tip – I think it’s a pretty well-known one!  Easy way to set up a cool few seconds of video.  For when you’re too lazy to actually film anything proper, but want ‘something’.  Attach the GoPro stand onto a kitchen timer, press go on the time lapse button, and there you go!

Editing takes FOREVER, because GoPro files are HUGE.  Our laptops usually have no problem with video taken on an SLR or phone, but ran out of space really quickly once I started loading GoPro files.  Programs crashing without saving, things not working, basically the universe did not want me to make a YouTube video.  I persevered. 😉

Similarly, (this one’s for YouTube in general), don’t underestimate the time required to find background music!  I’m happy with the tracks I eventually found, but my gawd did they take some finding.  Maybe I’m just a dunce and don’t know where best to find royalty free/creative commons stuff.  Anyway – if you’re a newbie like me, factor in lots of time for music hunting!

As a final point, I’d add that you have to genuinely not care what people think of you!  The nature of GoPros that they’re used whilst travelling lots, so you’re probably never gonna see those people that looked at you funny for wearing a headcam again.  I maybe wouldn’t be so keen on walking around Preston with a headcam or selfie stick, but for a week you can suck it up.

I think that’s all I can offer. 🙂  I have serious respect for Stef Michalak (of the Michalak’s family vlogs, if you’ve been living under a rock) after all this!  Those silky montages, omg.  Oh and MicBergsma‘s videos were really helpful too!