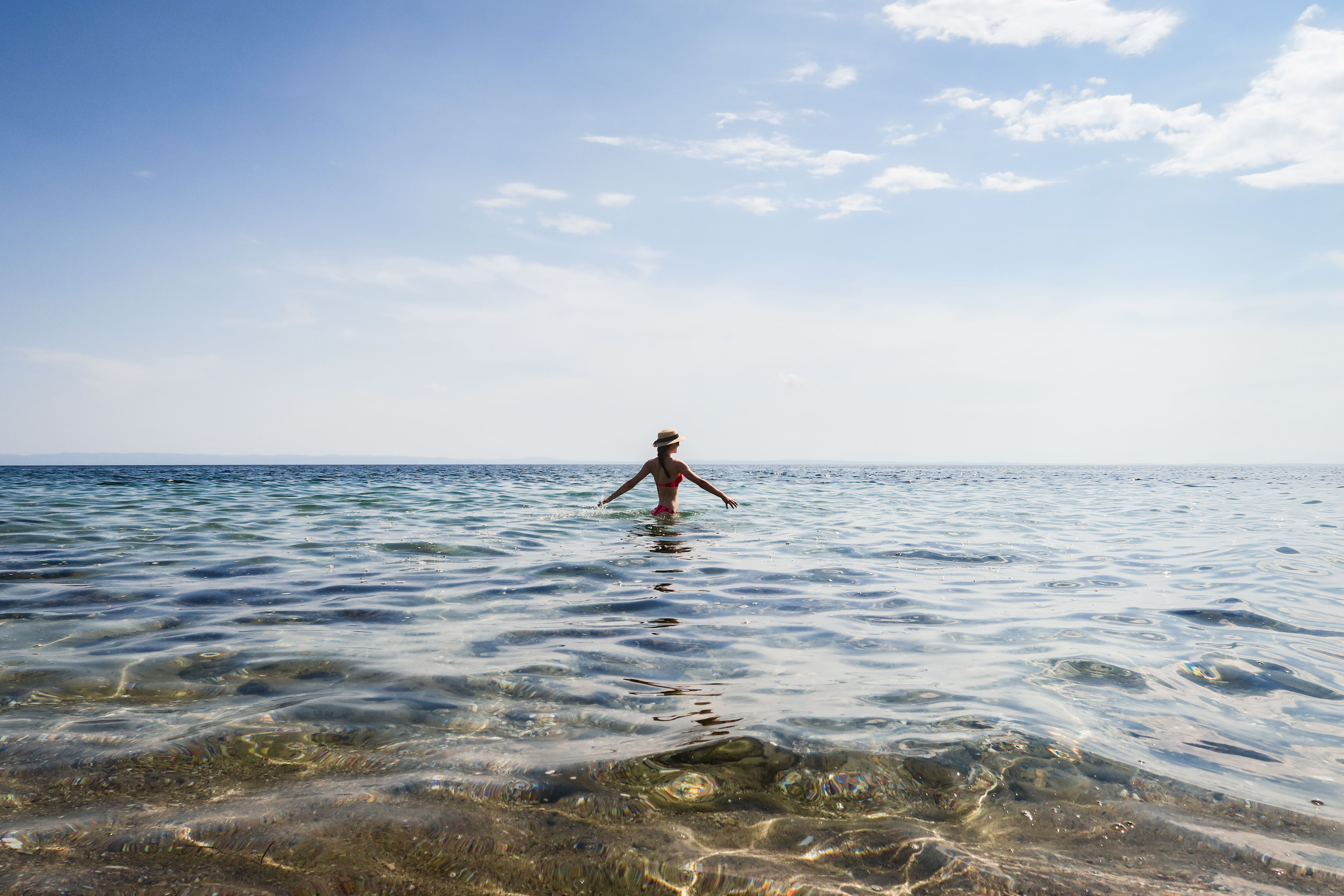 If only writing a blog post could transport you back! I recently spent a week in Sithonia, Halkidiki and would quite like return right now please. I’ll be honest, I hadn’t really thought of mainland Greece as a destination until booking this one on a whim, but would 100% recommend it now. Who needs an island when you have 3 peninsulas, even if you can only visit 2 if you’re neither male nor a monk?

If, like me, you fancy a chilled out week on the beach to read books, swim in the sea, potter around a few towns and not an awful lot else, read on for recommendations and info on where we stayed. I’ll start with the couple of days we spent out and about around Halkidiki in a car hired from the hotel, but skip further on if you’re just interested in a hotel review (and where we found such a good deal!).

Oh the most photogenic, cutest little town! We only stopped here because the car hire guy recommended a restaurant for our drive along the Kassandra peninsula, and I’m so glad we did. I didn’t realise the town itself would be so beautiful; Afytos is most definitely a picture postcard place but without the crowds that such pretty locations often attract. The view over clear waters, winding streets and cute boutiques made it a perfect place to spend a few hours during our day in Kassandra. I was restrained and only bought a pack of arty postcards, which I’d consider an achievement when the shops were filled to the brim with trinkets I loved.

Late June felt like a perfect time for this holiday – warm enough that it felt like a proper ‘summers holiday’, but not crazy sweltering so wandering the streets was still enjoyable. 30 ish degrees was just nice I’d say.

Said recommended foodie stop was Thea Thalassa, a fish restaurant overlooking the sea in Afytos (Afitos? I’ve seen multiple spellings). It certainly didn’t disappoint! A huge bowl of fresh mussels, Greek salad, fried feta dish and aubergine mousse (which I expected to be baba ganoush but wasn’t) set us back a total of 24 euros, which is far less than an equivalent meal would back home with a far less impressive view. Not forgetting the dessert offered on the house too. I’d highly recommend a stop in Afytos for this food alone tbh.

Vourvourou: the first stop (after Lidl for factor 50 baby suncream) on our drive around Sithonia, and the one we almost skipped after missing the turnoff twice. I’m so very glad for that U-turn, because Vourvourou was simply stunning and perfect for a spot of lunch (Greek salad, obviously) before exploring Diaporos Island by boat.

Not part of the original plan, but on seeing how cheap and easy boats were to rent, how near the island was and how crystal clear the waters looked, hiring a boat for the afternoon seemed like a no brainer. Ours was from Meltemi boats rental and cost 60 euros plus fuel for an afternoon. The guys brief you on how to drive the boat, where to go, and where to avoid, then off you pop for a lap around Diaporos Island dropping the anchor in as many shallow coves as you fancy.

My photos probably don’t do it justice so just give Diaporos Island a Google and you’ll see what I mean.

With the roadtrip around all of Sithonia swapped for a boat trip around a tiny island, we wanted to at least stop somewhere else for dinner rather than heading back to the hotel. I’d read good things about Nikiti so off we went for fresh seafood and a glass of wine. Even later in the day Nikiti beack seemed pretty crowded compared to others, but had many places to eat and a lovely buzzy atmosphere for the evening.

Grey skies, wind, and end of the day tiredness meant that we probably didn’t see Possidi beach at its full potential – the long stretch of sand extending out into the sea looks beautiful on images I’ve seen!

This is potentially the most First World Problem sentence ever uttered, but I’m sure you can relate: searching for holidays can quickly become a tedious process. Every pool starts to look the same, your budget increases £100 with every frustrated hour of searching, and you’re still yet to find somewhere that makes you say ‘OMG yes get me there now’ whilst also not leaving your bank account at £0.02 for the rest of the summer.  Ya feel me? I even had a spreadsheet on the go. However, said spreadsheet went out the window when we both happened upon the same TravelZoo Top 20 deal at the same time, tapped through, and realised that the ‘£299 All-Inclusive week in Greece‘ was indeed £299, or £379 for the dates we wanted once transfers, luggage and a sea view were added. Some of the photos looked like artists’ impressions so I was pretty suspicious that it may look completely different in real life, but we were bored of looking at this point. This holiday was a couple of hundred pounds cheaper than pretty much anywhere else for a week at the end of June, so with a ‘sod it’ attitude we booked Bianco Olympico Beach Resort on a whim through Fleetway Travel.

So was it a risk worth taking?

As expected, this was a very newly opened hotel – as in literally 3 days before we arrived – and definitely had a few teething issues. No hairdryers or irons in the rooms… the safe wasn’t bolted down… no entertainment in the evenings… no music playing at any time of day… not enough towels given that the website stated beach towels were available… rooms only cleaned if you left your room key at reception… you get the idea. That said, the staff did their absolute best to help everyone and really couldn’t be faulted, and I really do think these were just teething issues. The hotel was under new management and had opened before it was ready. I assume most of these issues will be ironed out shortly, including the lack of irons. If we’d stayed at the hotel the whole time it probably would’ve been far more frustrating, but seeing as we hired a car for a couple of days and saw more of the area, the issues weren’t quite as annoying as others found them.

It’s only fair that I add the good points too, as we did really enjoy our week overall! The hotel was clean and bright, with newly furnished rooms and balconies overlooking the sea (if you selected a ‘Side Sea View’ that is – I think the ground floor rooms wouldn’t have a great view). It was indeed a beach resort, located literally over the road from Vatopedi beach.

Eating every meal outside on the terrace overlooking the Aegean isn’t too shabby either. As for the food, I liked it! The all inclusive offered sometimes pretty random selections but always including some kind of traditional British vegetable. Tzatziki, feta, and brussels sprouts, anyone? As someone who likes to pile their plate high with whatever colourful food I can find, the food suited me just fine.

Not a spot that came up on any of the ‘best beaches’ list, but I think that’s probably what made Vatopedi beach so nice. Of course it helped that the beach was just over the road from our hotel, albeit down a hill that seemed to get steeper every time. The beach itself wasn’t crowded at all, always had free sun loungers and just around the corner was a mini ‘private’ beach if you didn’t mind getting your legs wet to find it. We didn’t bother swimming in the pool once as we had clear, warm water to swim in here, and lapping waves make a rather nice reading soundtrack.

Bianco Olympico Hotel didn’t have a gym so we made use of the empty beach for morning workouts instead. Crab walks along the sand and situps on a sun lounger, anyone?

Gotta love holidays for forcing you to chill out and finish the books that have been on your shelf for months (and the books you picked up at the airport on realising you hadn’t packed enough). I sat, I swam, I read, I knit, and I wore a different bikini every day because this gal has quite a thing for swimwear. Ain’t no way I was passing up the chance to wear as many of my swimming cossies as possible.

I don’t have an awful lot to write about the surrounding area… as there wasn’t an awful lot around. Besides beaches, rolling hills and olive trees, that is. Bianco Olympico Hotel was pretty much in the middle of nowhere, so if you don’t hire a car, you aren’t going to see much else for a week. Since we did hire a car for a couple of days (organised by the hotel), the isolation didn’t really bother us, and meant that the beaches were always pretty quiet and seemed relatively untouched.

One couple told us they walked to the nearest town of Vatopedi and the return journey took the best part of an afternoon in the heat, so it’d be fair to say there isn’t a great deal within walking distance besides local taverna Elizabeth’s House. An evening stroll around the area is a rather nice way to walk off dinner, but it won’t lead you anywhere!

Anywhere besides a quiet, glassy beach at sunset that is, which isn’t so bad at all.

This was only my second trip to Greece (the first being a family holiday to Corfu when I was 3, from which I remember one horse and carriage ride and that’s it), but I’m already mentally planning many more. Let me know if you’ve been to Halkidiki or fancy a summer trip to these shores!