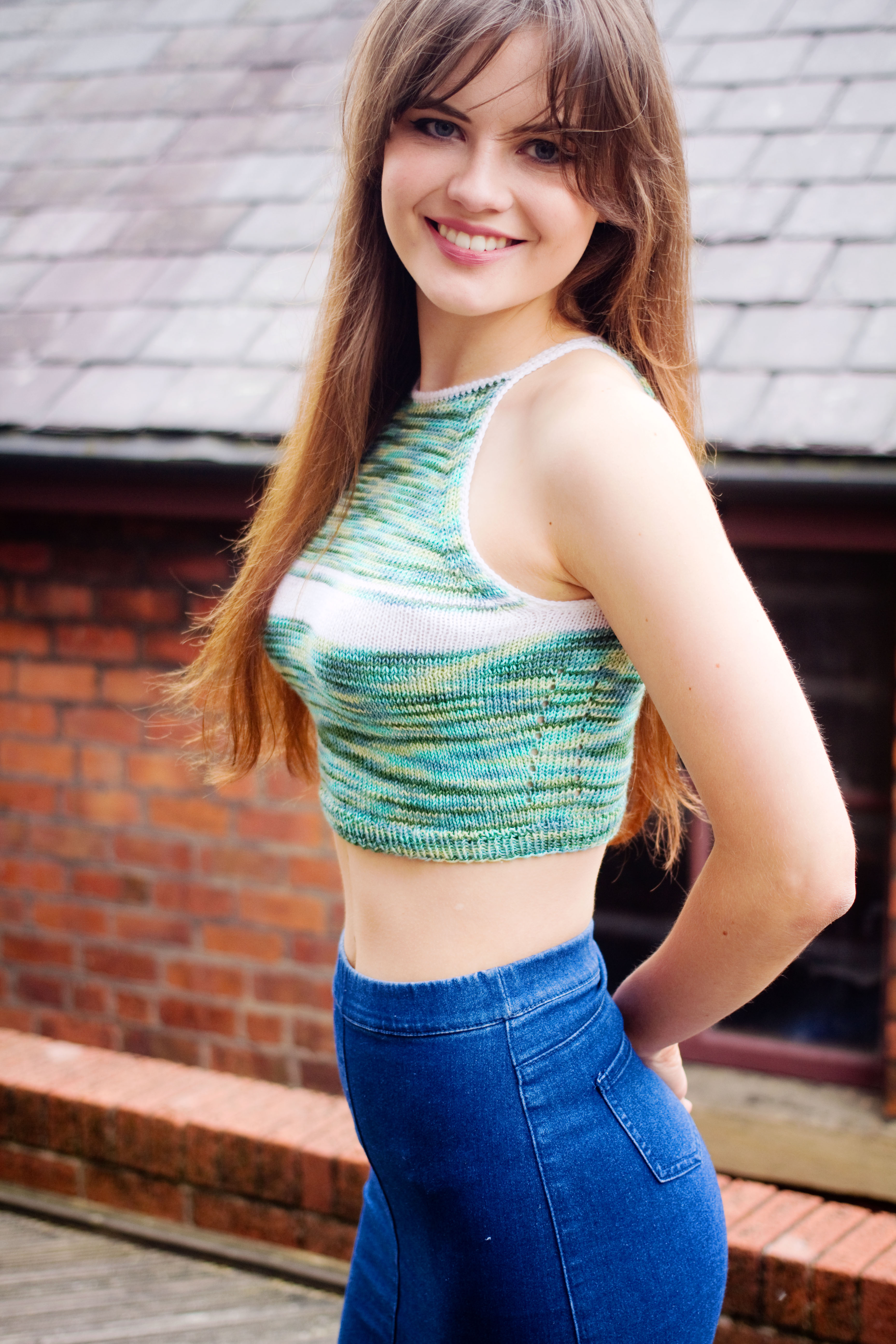 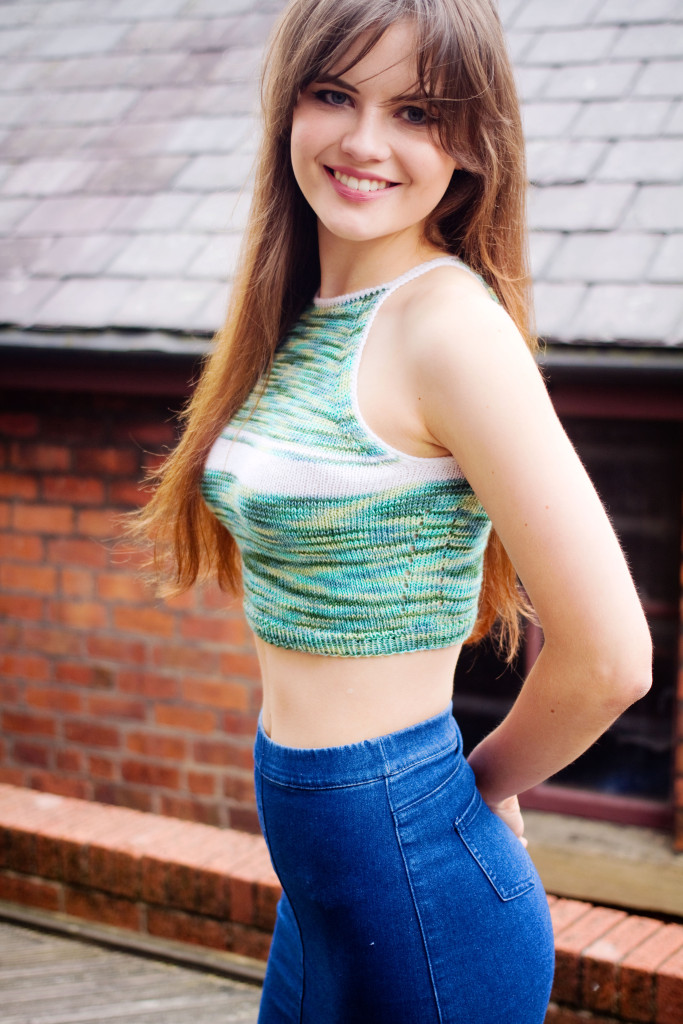 Another little knit whipped up by mother and I 🙂  We pretty much have a system of ‘what can I make with this’, then swatching, then a few scribbly calculations, then casting on and making the rest up as we go along, then me finishing off all the fiddly bits.  Seems to work pretty well! 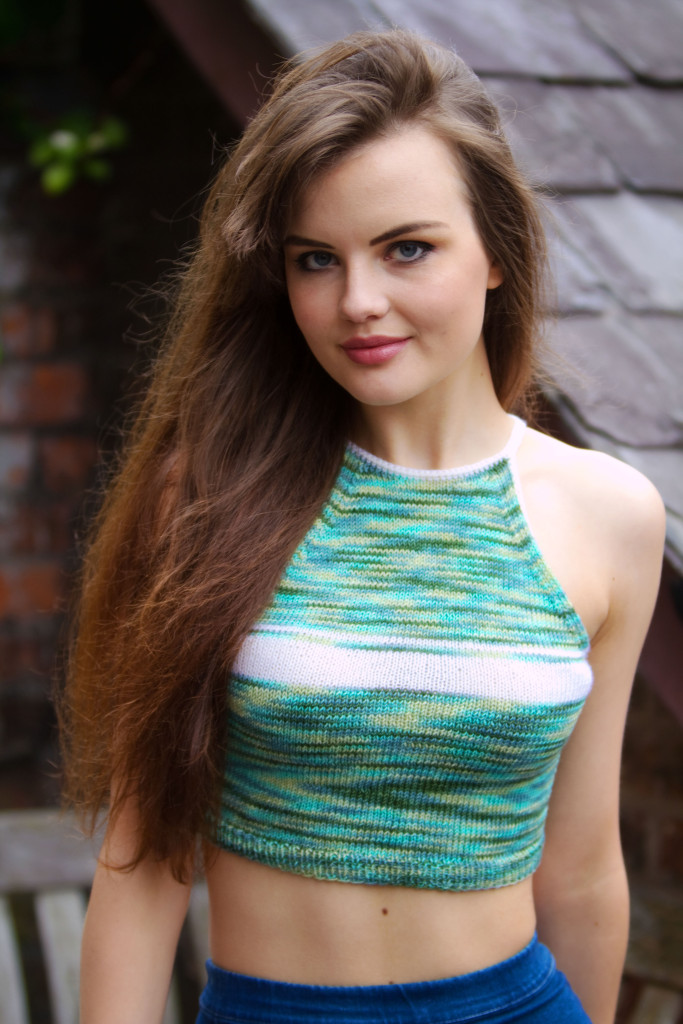 Thanks to Leslie for the yarn!  She did pick well for us.  A couple of years ago I’d have probably gone to great lengths to avoid the blotchy pooling stuff but I actually really like it now.  ‘Space dyed’, I think the retailers are calling it.  Does make the whole top look ever so slightly wonky but nevertheless, accidental stripes are one of those things that make handmade clothes just that bit different.  That’s what I love most about making (well, contributing to making in this case) my own clothes – you can 100% guarantee nobody else has one like it, and make it fit you perfectly whilst you’re at it too.  Tailoring and that 🙂  I hadn’t actually planned on making it this short, but was gonna run out of yarn so didn’t really have a choice!  Note the white stripes that are supposed to look deliberate but were actually because we didn’t have enough too. 😛  I quite like how they look though, and the white edging because I’m a saddo that likes things like that. #geek 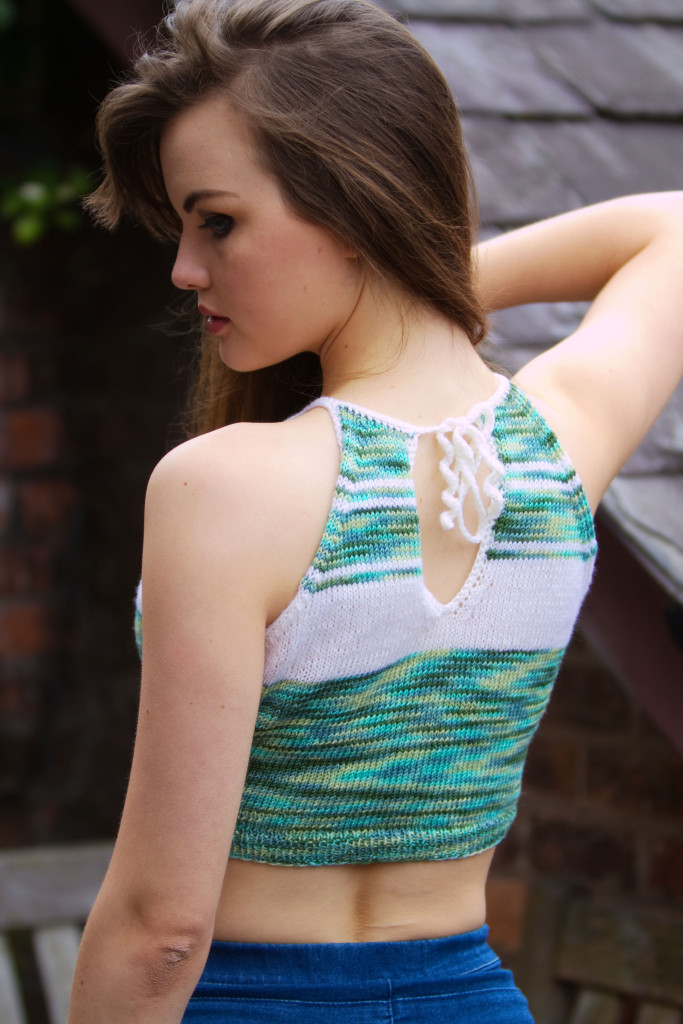 Keyhole back was kind of an accident too when I realised it wouldn’t go over my head any other way! 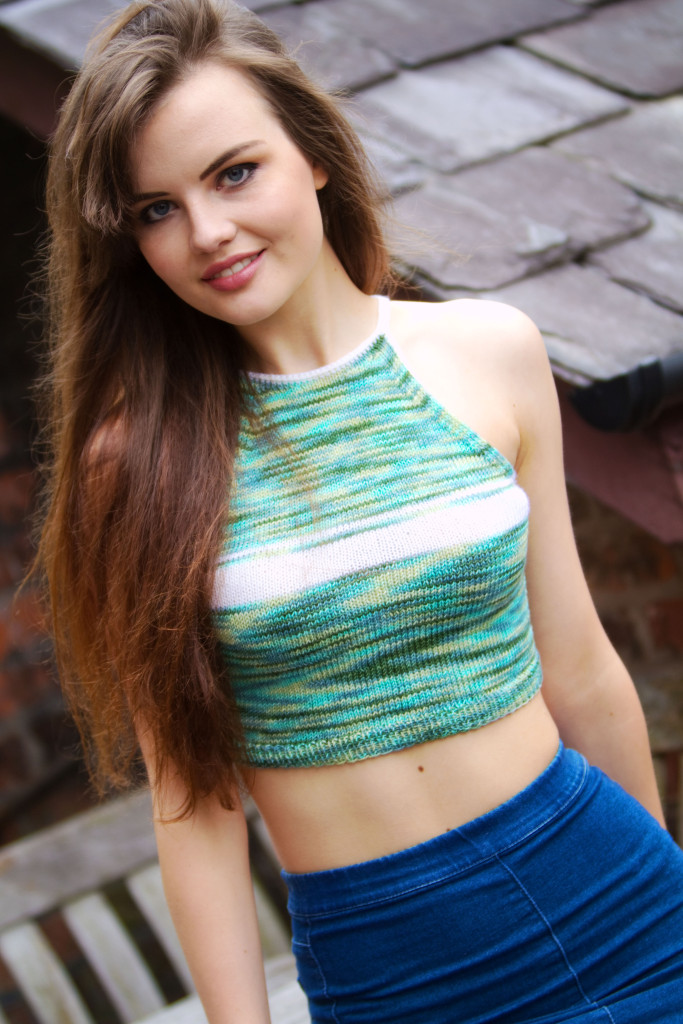 I’m already planning more things to make when I’ve more time on my hands.  Another crochet bralet for starters.  Obviously sleeveless cropped tops aren’t exactly all year round wear in England but they’re so much quicker to make.  Can’t really be arsed slogging it out making long sleeves and a long body when these are much more fun anyway.  Can always throw a denim shirt or something on top. 🙂 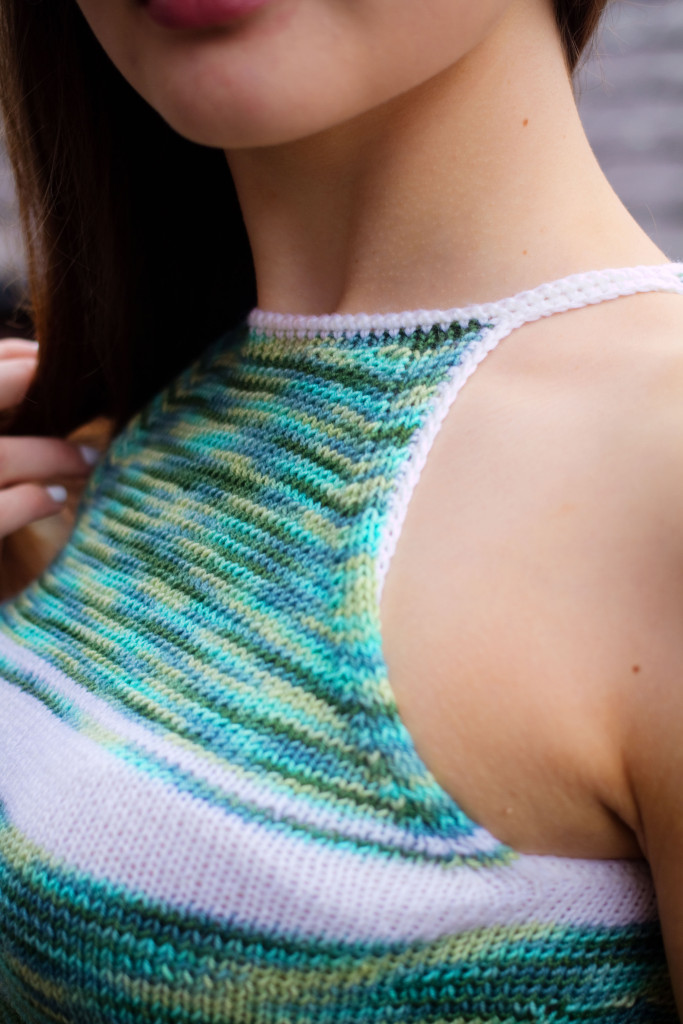 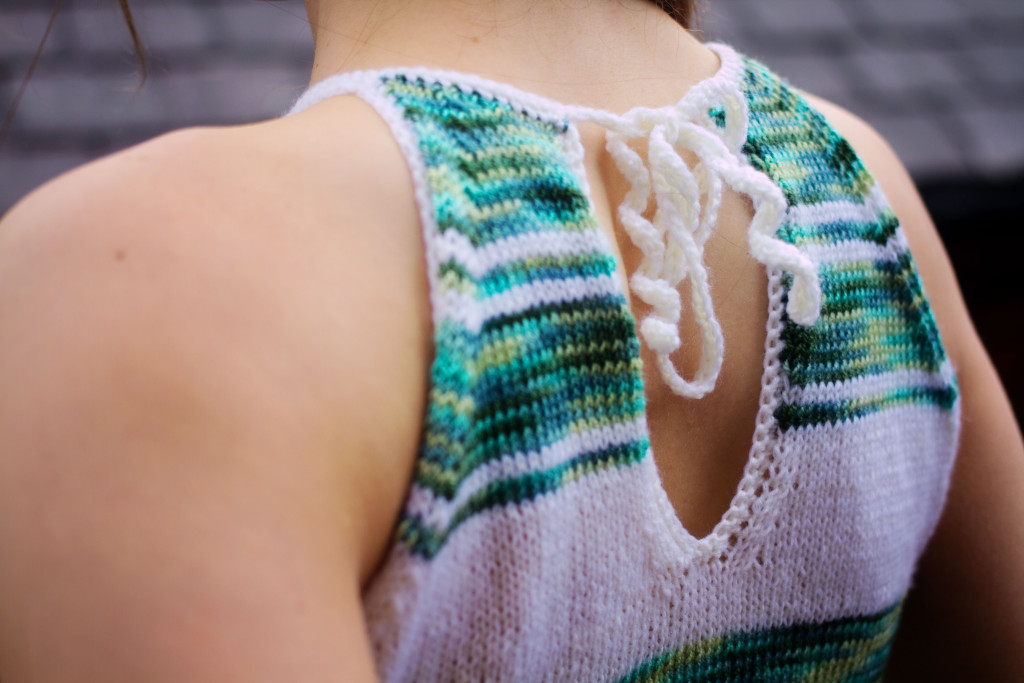 Crocheted around the edges to neaten it up a bit. 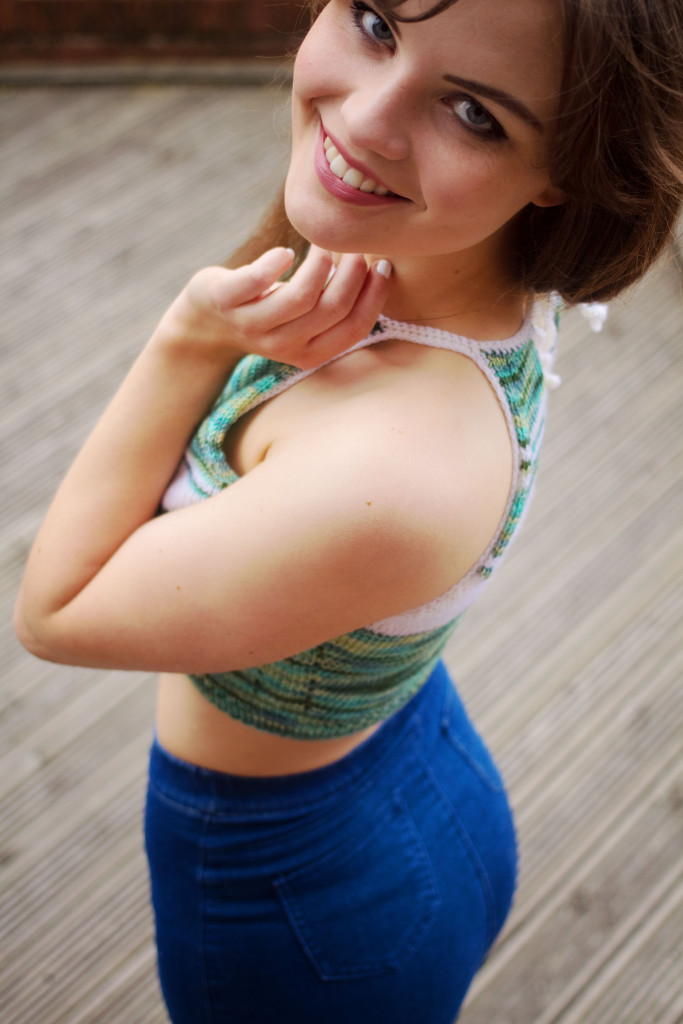 Hope everyone’s had a good week so far!  Mine’s been kinda weird really.  I went into college on Monday, then decided that I’m much better off staying at home to revise because I just get too distracted by people at college.  I talk too much!  Just feels antisocial to shut myself away in the library allll day.  So yeah, I’ve only been in on an exam day since then.  I made the mistake of going to Bodypump class the day before those exams, which I kinda regretted when I could barely move my arms (or walk) the day after.  And then Thursday… I have no idea what was up with me (think I must’ve eaten something dodgy or something) but I felt absolutely bloody horrendous, which really wasn’t fun!  No sleep whatsoever on Wednesday night and I basically laid on my mum’s bed doing nothing all day Thursday.  Mum’s bed is the place you gotta be, y’know?  I know I’m ill when I’ve no appetite and no energy or motivation whatsoever.  Polar opposite of my usual self.  I’m fine again now though, so at least whatever it was didn’t hang about!

Spent almost as long choosing colours as I did kni

Pattern for the brightest sweater going will be av

Was obsessed with this yoke when I knit it and sti

Shall be wearing my #OverItSlipover with anything

Add a vintage necklace and suddenly I am a new wom