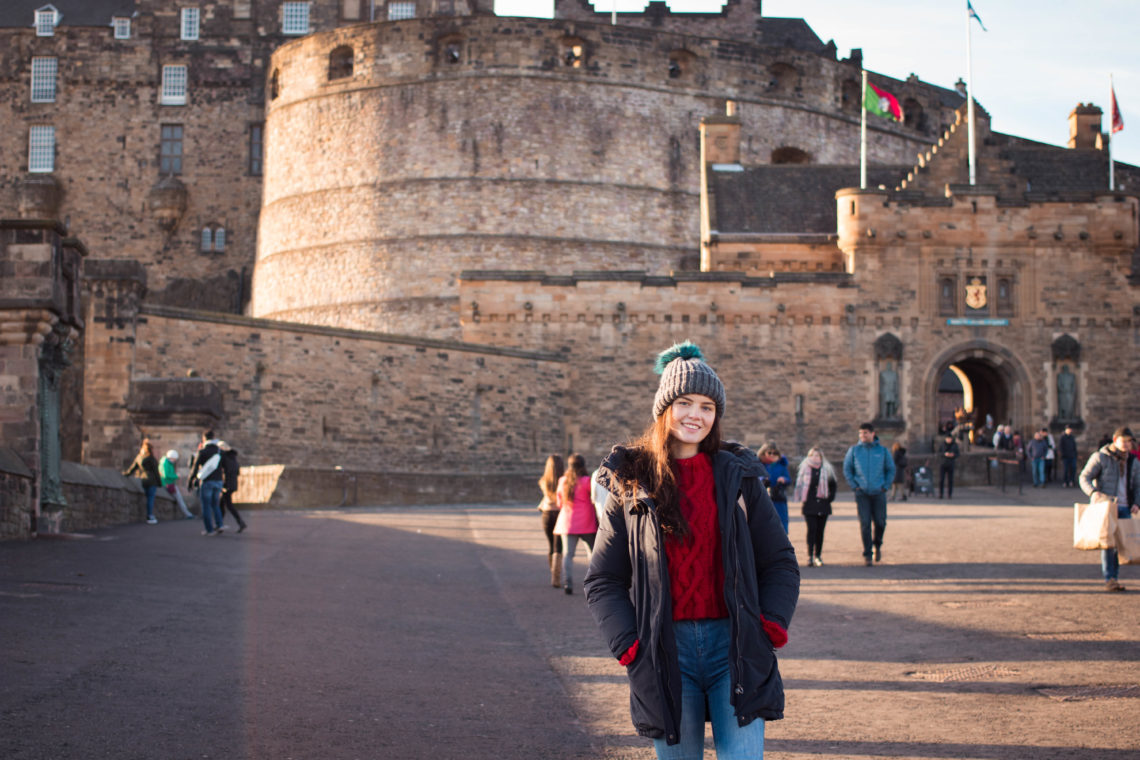 Why did it take me 21 years to finally tick Edinburgh off my ‘must visit’ list? You tell me. Only 2 hours 20 minutes away on the train which is the same time it takes me to go to London, but for some reason I’d never made it before. Just before Christmas I finally did though, and it definitely won’t be my last visit!

I appreciate the 5th of January perhaps isn’t prime to share Christmas travel but hey, if I can encourage you to book an Edinburgh trip for 11 months time, then my work is done. Christmas is the only time I’ve seen Edinburgh but I think it suits the city pretty well! We visited from the 14th to 16th December so it was all systems go on the festive front, and everything looked so so pretty decked out with twinkly lights.

In an effort to make this as informative as possible I’ve shared what we did, where we stayed, ate, and drank, (and whether it was worth it) on a first time, 2 night trip to Edinburgh. Let me know if you’ve been and have recommendations for next time!

Because obviously. On arriving at Edinburgh Waverley station you’re practically at the Princes Street Christmas markets already, so this was a no-brainer first stop once we’d dropped our bags off. They’re busy, bustling, and smell of a combination of mulled wine, cheese, and strongly fragranced soap, so pretty much like most Christmas markets really, with a few fairground rides thrown in for good measure. Oh and a scenic view of the castle. The markets were noticeably much busier on the Sunday (16th December) than on the Friday when we arrived; busy makes for a nice buzzy atmosphere but does mean you have to be extra careful your sourdough covered in raclette doesn’t get knocked on the floor or down your front. Nearer to the station was a covered area with sofas, more seating and live music that’s the perfect place to grab a last bite to eat before heading home.

Our first day was a ‘walk everywhere and quickly see everything!’ kind of day so we just had a nosey fron the outside, then headed back to go inside on the second. I was told by a couple of people that Edinburgh Castle was impressive enough from the outside and wasn’t worth paying to go in, but I’m glad we did! Sorry guys, totally ignored you. We didn’t do a tour, and instead just wandered around at our own pace lingering in some areas for a while and not bothering with others. I hadn’t realised there were so many mini museums/exhibitions inside, including the Scottish crown jewels, dungeons, and general history of the city. Entrance isn’t particularly cheap (£18.50 each) but I’m glad we did.

In hindsight we should’ve visited the day before when the skies were blue and the view probably clearer (as you can see, it was pretty dull and cold when we did go in), but oh well.

Taking photos was as near as we got to climbing Arthur’s seat on this occasion, mainly because I didn’t want to pack walking boots on such a short trip. Just a pretty backdrop for now that I’ll add to the list for next time.

My handknit Crisscross Scarf (as I’ve officially named it) came in handy that’s for sure. Can you tell I’m kinda chilly up there? Pattern for the scarf is now available here, if you’re interested.

Well worth popping back in the evening to see the castle lit up at night! And worth holding your phone very steady to take a pic when you’ve forgotten to charge your camera batteries. Ahem.

Never have I ever seen so many knitwear shops in one place as on the Edinburgh Royal Mile.  Hoorah for all the woollens.  Spent far too long deliberating over which particular tartan scarf to buy my mum for Christmas. The buildings are beautiful, the shops inviting, and it’s just a nice street to meander along really.

Victoria Street is apparently the most photographed street in Scotland and you can see why! How very photogenic.

We stayed at the Principal Edinburgh George Street, which couldn’t have been a better choice! A beautiful hotel with comfy beds, a very tasty breakfast, and in a really easy central location. Christmas decorations were nothing short of spectacular too of course. I liked that Edinburgh was small enough to be walkable, but the location of the Principal was extra convenient.

How we managed to bag such a good deal on The Principal I do not know, but I’m not complaining!  We paid £320 for a superior room with bath, with breakfast and drinks vouchers.  I’ve stayed in a Principal before and paid full price, so I know this was a really good deal especially for a pre-Christmas date. Keep an eye on Secret Escapes, guys!

Where we ate and drank

We only spotted this hidden away place because we were looking for a cash machine, but popped in for a nosey and made a booking for the next night. It’s tiny, you have to climb a rickety spiral staircase to get in, you bring your own booze, and it feels a bit like you’re eating in somebody’s Titanic themed dining room.  But it’s fun!  When we arrived there were a few groups on their Christmas ‘do, but once they’d gone we had the place to ourselves.  Odd, but an interesting experience!

Well duh. Isn’t sausage eating and mulled wine (or cider, on this occasion) mandatory with every Christmas market visit?

Made in Italy, Grassmarket

To be honest this was a ‘get us a hot drink, quick‘ kind of stop, but that turned out to involve tiramisu hot chocolate and was very, very nice.

Cocktails at The Dome and The Principal

Both places for a fancy pants Christmas cocktail surrounded by twinkly lights. We had a voucher each to use at the Principal, and the The Dome seemed to be the busiest, glitziest spot with the biggest Christmas tree ever so we popped over the road for one drink there too. Prepare to wait a while for your drinks and have fairly little room to move, but it is a nice festive experience! (For one drink. They’re pricey!)

other things to see and do

— Wander around Dean Village and immediately want to live there. Surprisingly I didn’t take too many photos here (too busy noseying and deciding which house I’d live in) but just give it a google and you’ll see what I mean. Literally a 5 minute walk from the city centre and you’re in a quaint, winding, cobblestoned village with a higher than average turrets to buildings ratio.

Visit the National Portrait Gallery.It’s free and right by the Christmas markets, so no excuses! An interesting spot to see a bit of ~culture~, impressive paintings, and gain wall art inspiration.

Check out the Camera Obscura and World of Illusions.  Edinburgh’s oldest tourist attraction I do believe? We saved this one for our last morning and got there when it opened at 9, as the queues had looked rather long by mid afternoon the previous day. You start with a little show of the ‘camera obscura’ itself on the top floor, and then work your way downstairs through the rooms of illusions – including faceplanting a wall in the mirror maze and feeling like you’re drunk walking through the vortex tunnel, if you’re anything like me.

Great views and excellent selfie lighting from the rooftop of Camera Obscura too. Take me back to Edinburgh already!