behind the scenes for Christy SS18 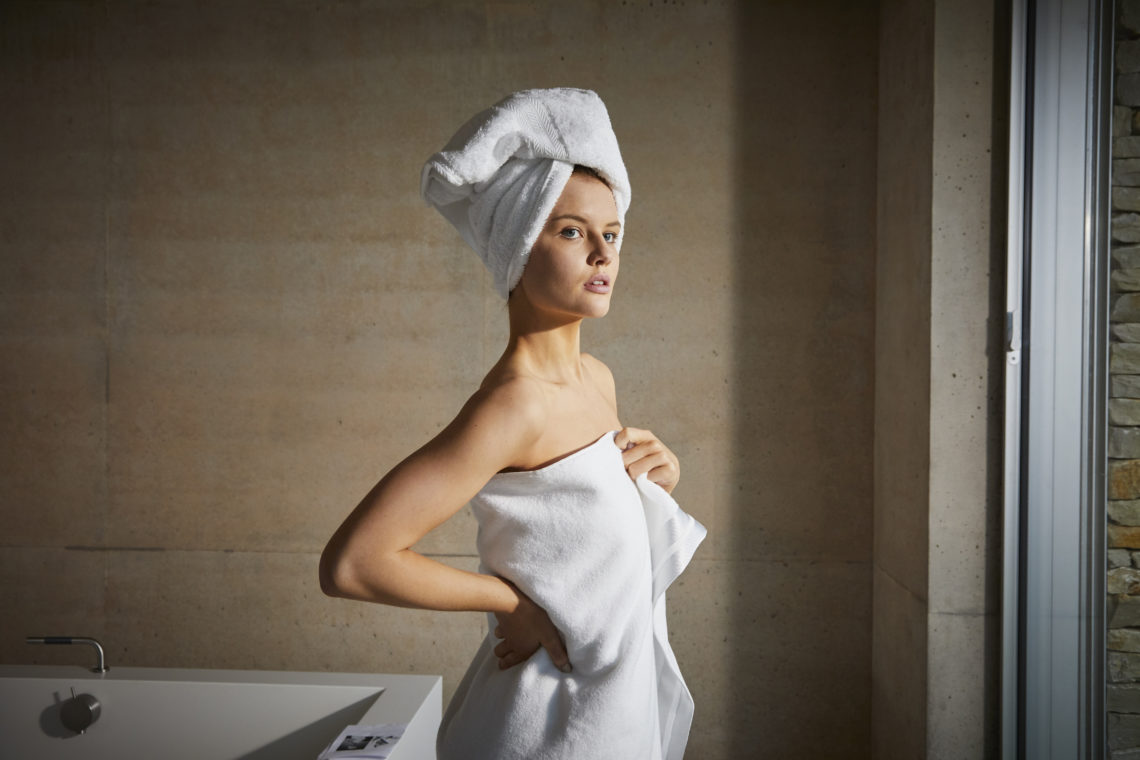 Ever thought ‘Hmm, I wonder what goes on behind the scenes at a homeware photoshoot?‘ or ‘I wonder how many people it takes to make a bed look like it does in the pretty pictures?‘

Probably not.  I mean, it’s quite specific tbf.  However, if such a thought has crossed your mind, then you’re in luck!  Way back in November 2017 I spent 5 days in the Cotswolds with the very lovely people from Christy Home, shooting their SS18 campaign.  And now I can finally share it here, 6 months later.

In a roundabout way, this collaboration actually came about as a result of the Northern Blog Awards last year.  One of the prizes for winning (which still seems a bit crazy that I did) was a monogrammed fluffy white towel, which I used in a test shoot a couple of weeks later.  The idea had been kind of Mario Testino Towel Series inspired, and Patryk’s signature moody style put a little twist on the idea.  Anyway long story short, the guys at Christy saw my photos and reached out to ask if I’d like to model their next collection.  And here we are, Lily wrapped in towels again, now on the wall in House of Fraser as well as on Instagram!

So yes, back to the BTS.  I headed down to the Cotswolds straight after my driving test (literally – I did my test with my suitcase in the boot and my instructor dropped me off at the station), and arrived at the most beautiful house on Monday afternoon.  When I say the most beautiful house… I have honestly never seen anything quite like it.  The house was absolutely huge, with glass doors and ceilings, somehow cosy and traditional but also really modern… oh and with a private mini lake too.  I literally kept discovering rooms behind what I thought were plain walls.  From then on I spent the time alternating between taking stills, videos, and making snacks. 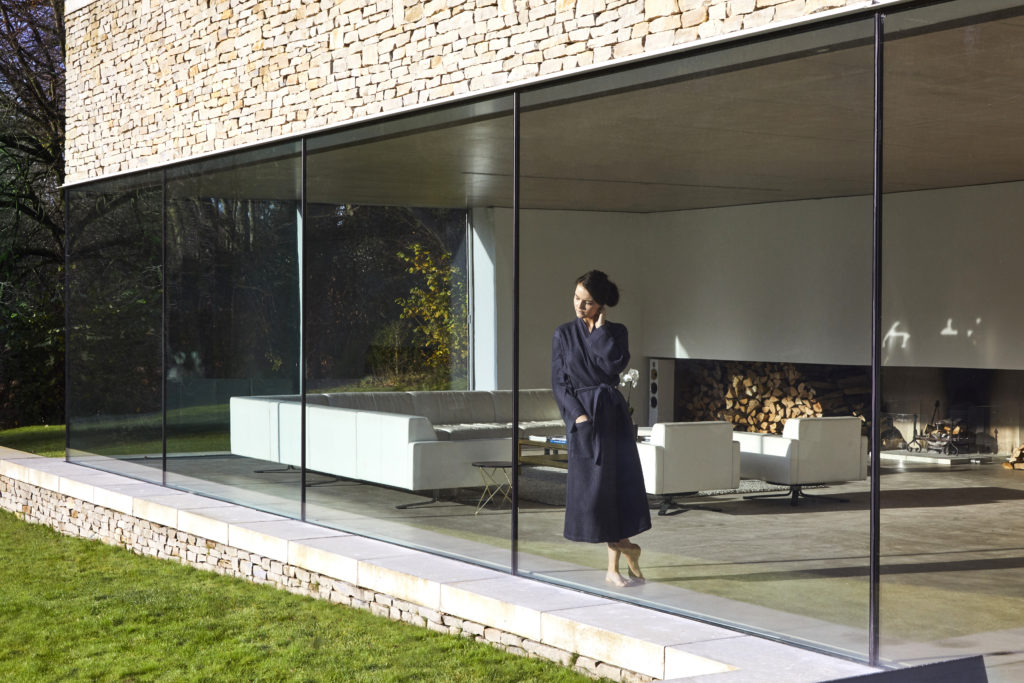 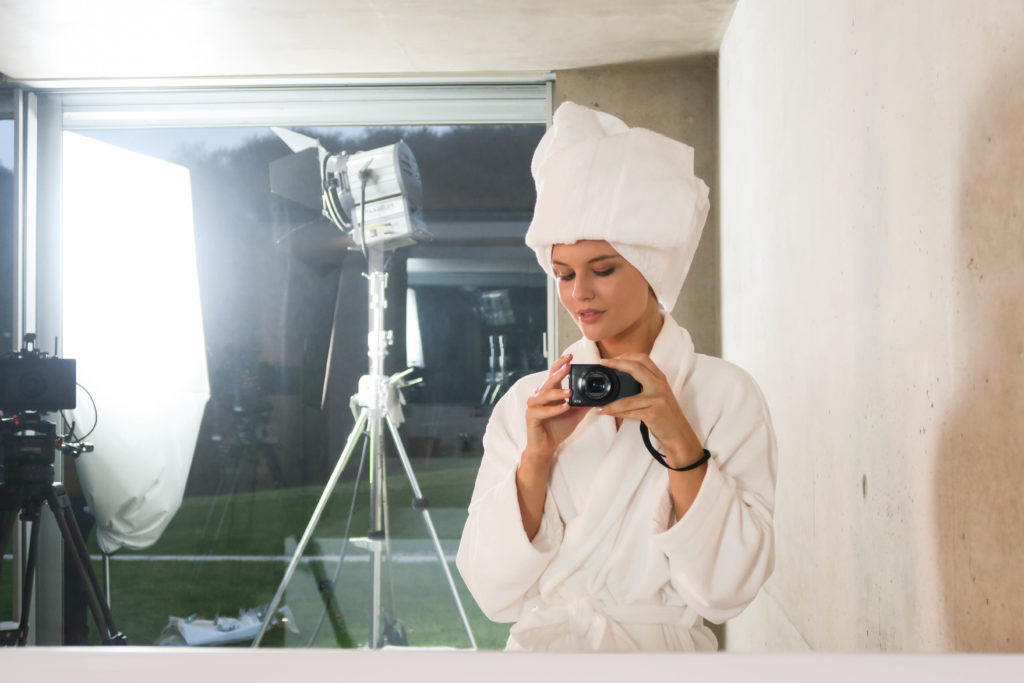 Shooting a summer campaign in England in November requires rather a hefty lighting setup! 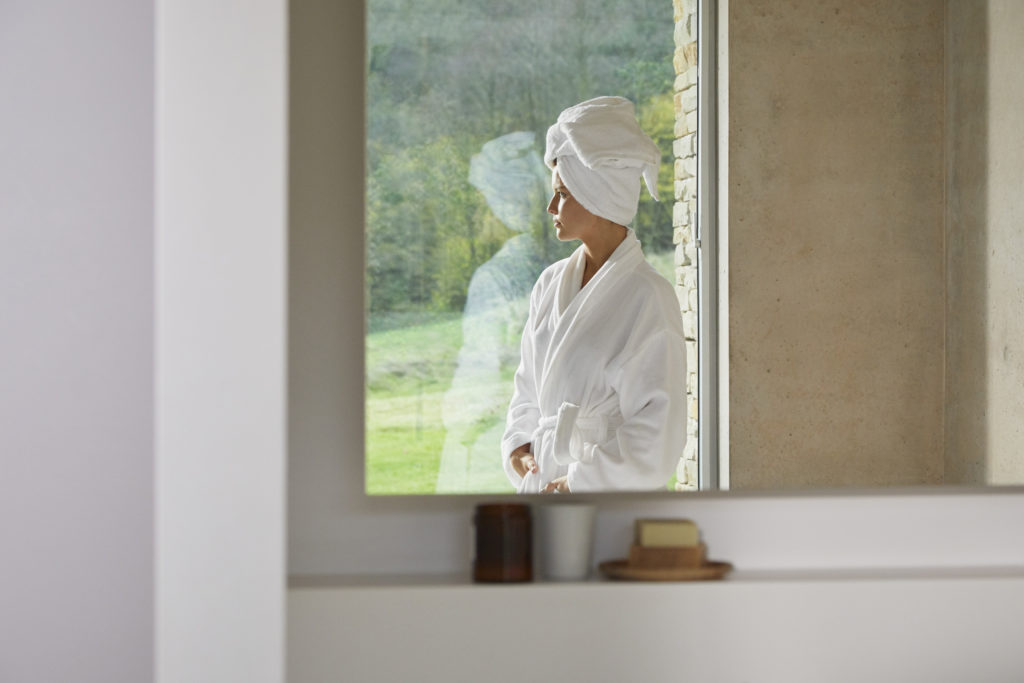 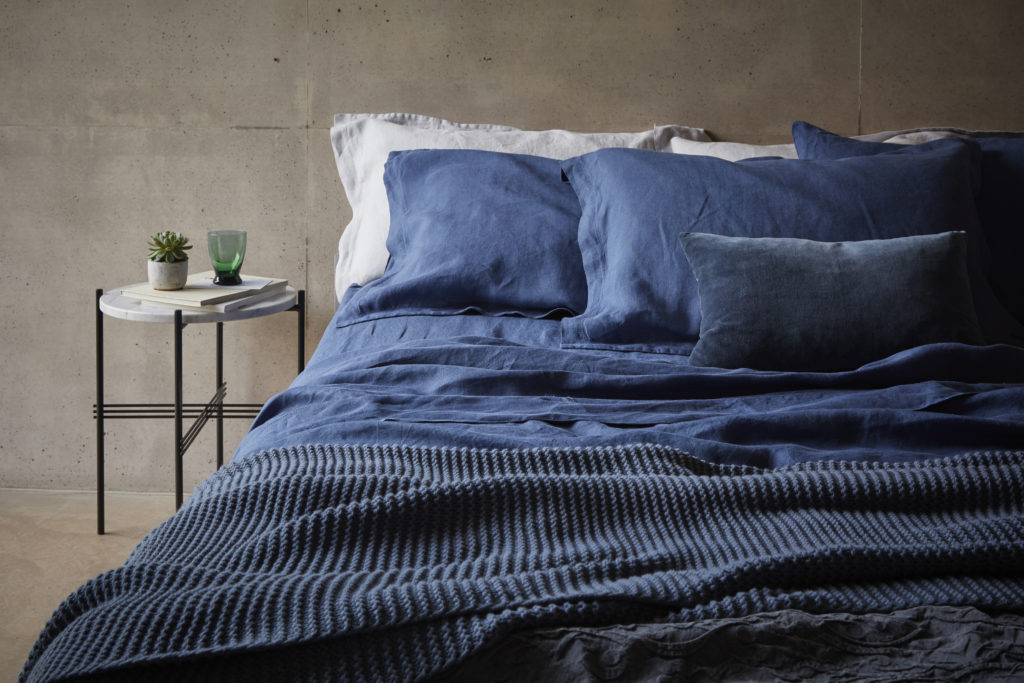 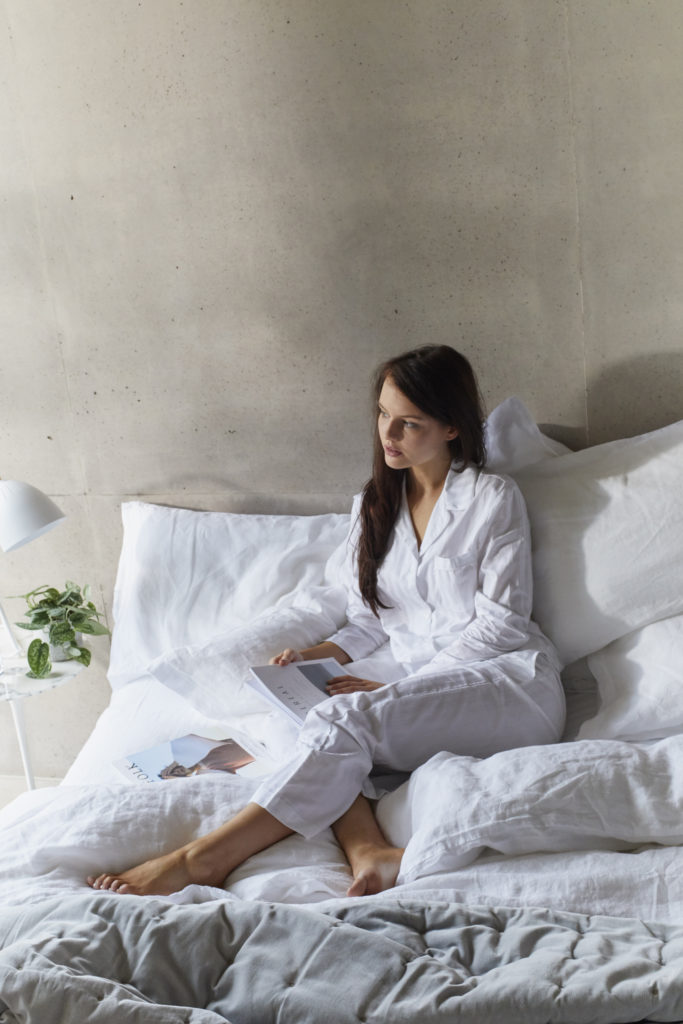 I spent the best part of 5 days in pyjamas and bathrobes so this was definitely one of the most comfortable jobs I’ve ever had. 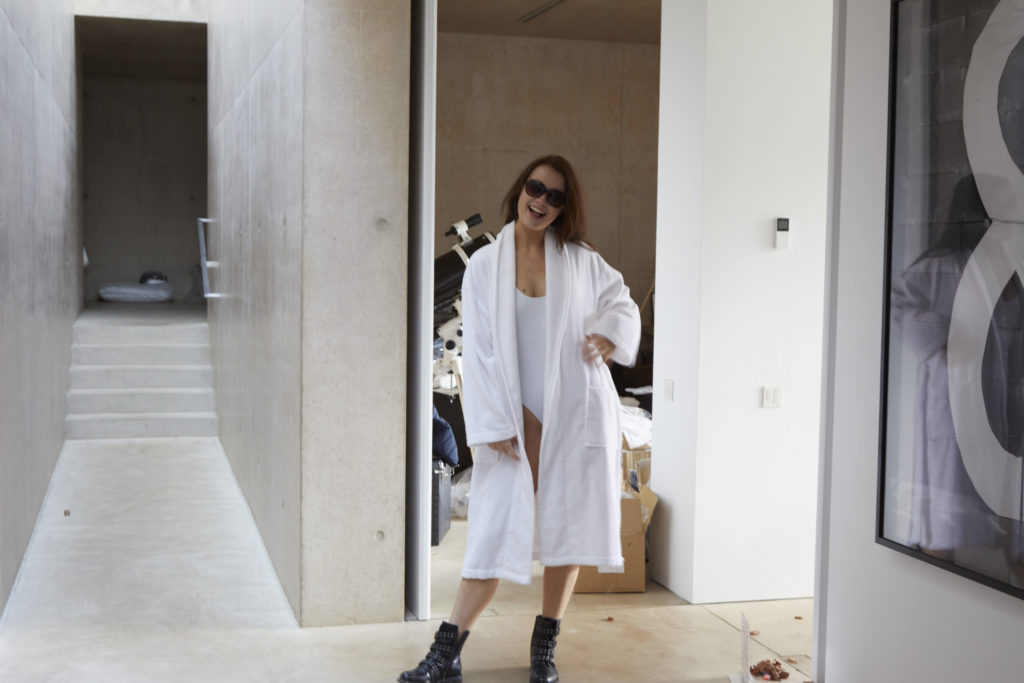 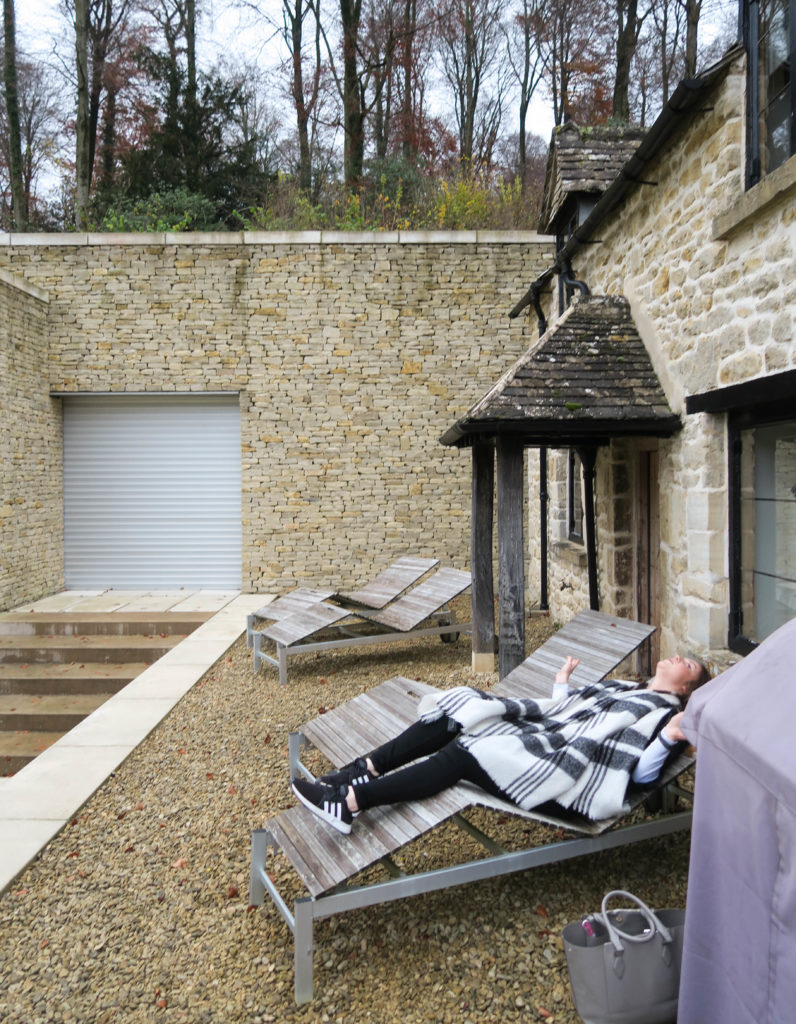 Needless to say it was not the weather for sun loungers. 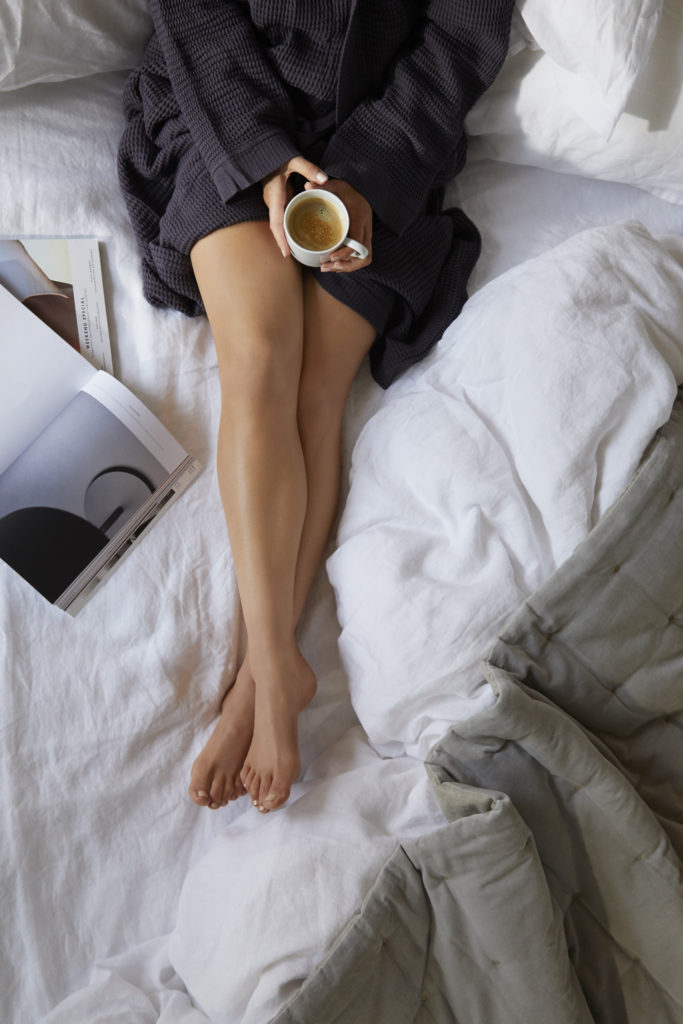 How the pros take flatlays – stood on a stepladder.  The week involved lots of holding cups of coffee on crisp white (and perfectly arranged) bedsheets, and I can proudly say I did not spill a drop.  Quite an achievement for my clumsy self. 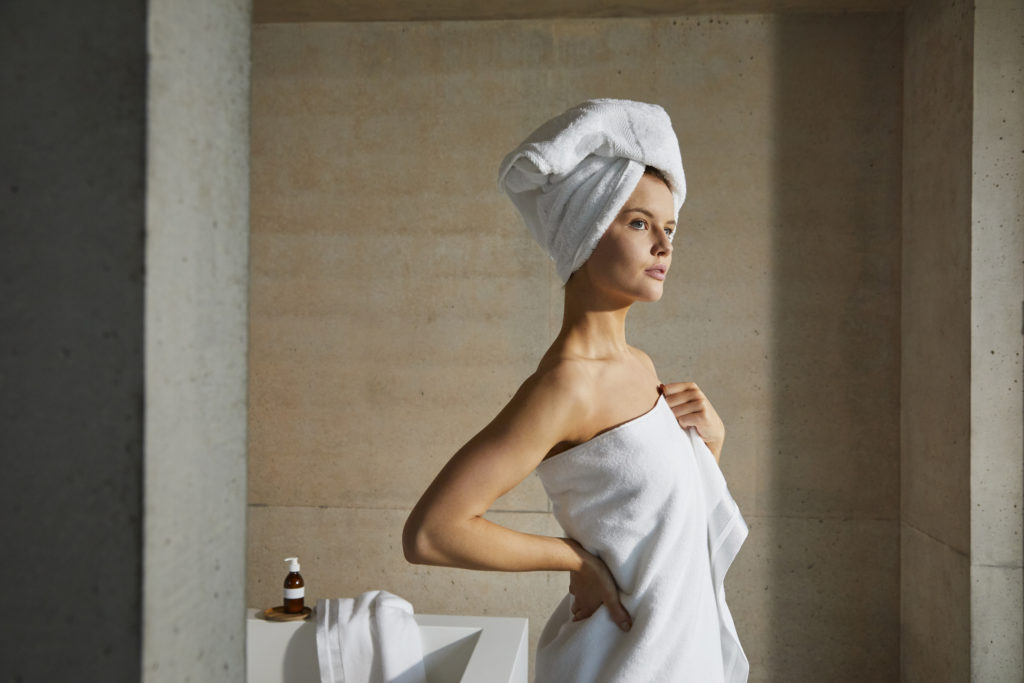 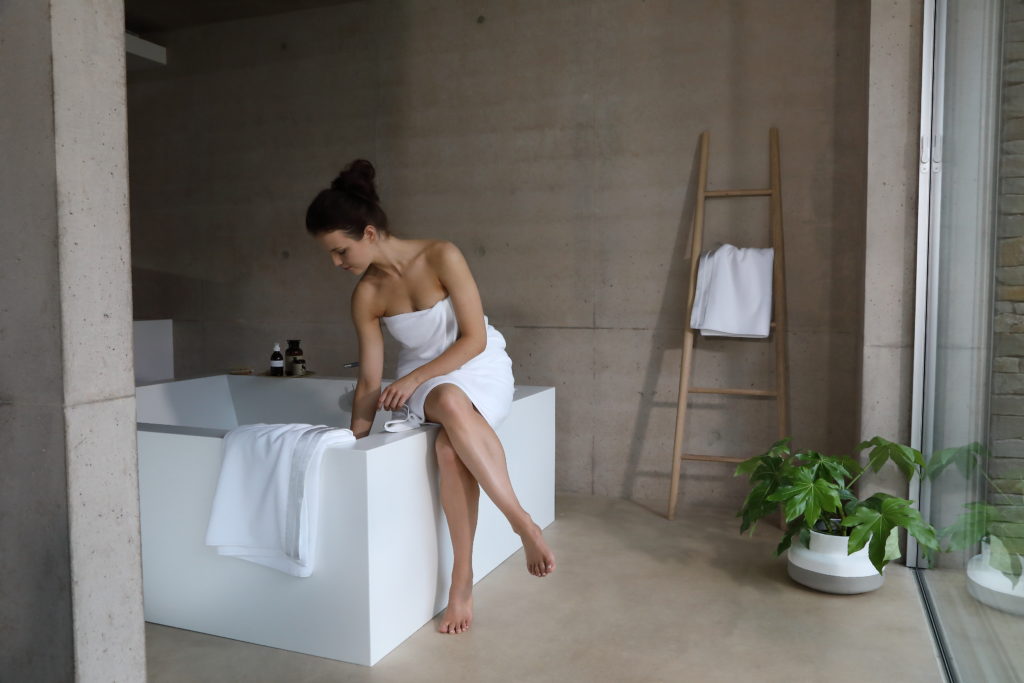 Behold the bathtub that could almost double up as a swimming pool (although I’m not sure how comfy those corners would be to actually chill in). 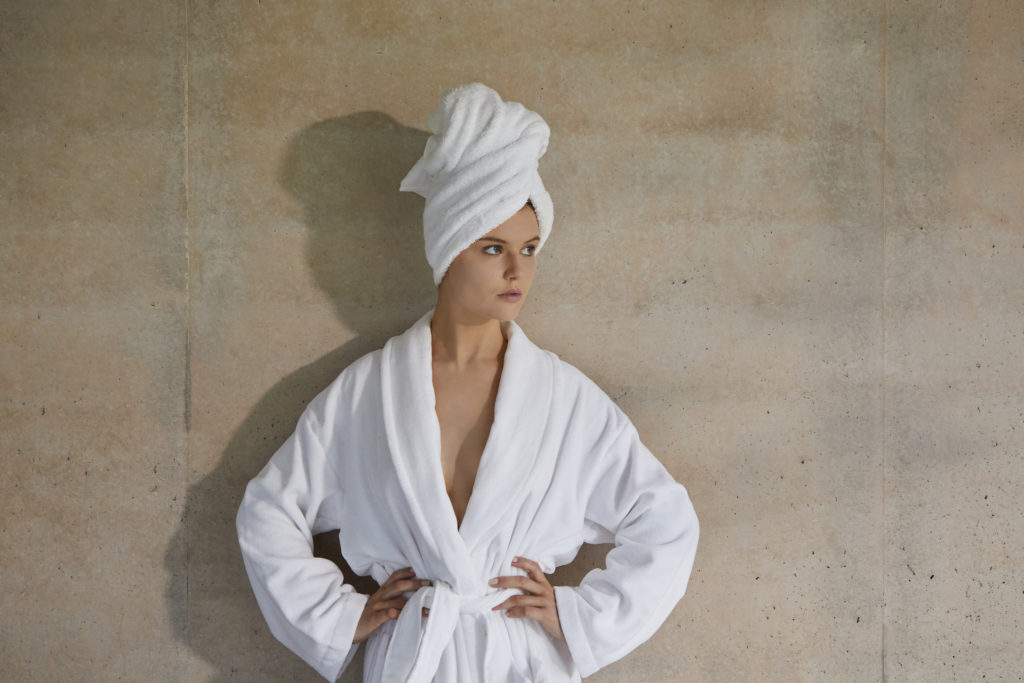 Something else that isn’t as easy as it looks – balancing a towel on my head just so.  Wrapping a towel turban seems simple day to day, but as soon as you try to do it for a photo, the damn thing will not stay in place.  Learnt that on my first towel shoot with Patryk, where most shots were taken in the couple of seconds before the towel toppled off and needed to be rewrapped again.  Safety pins saved the day on the Christy shoot, as they always do! 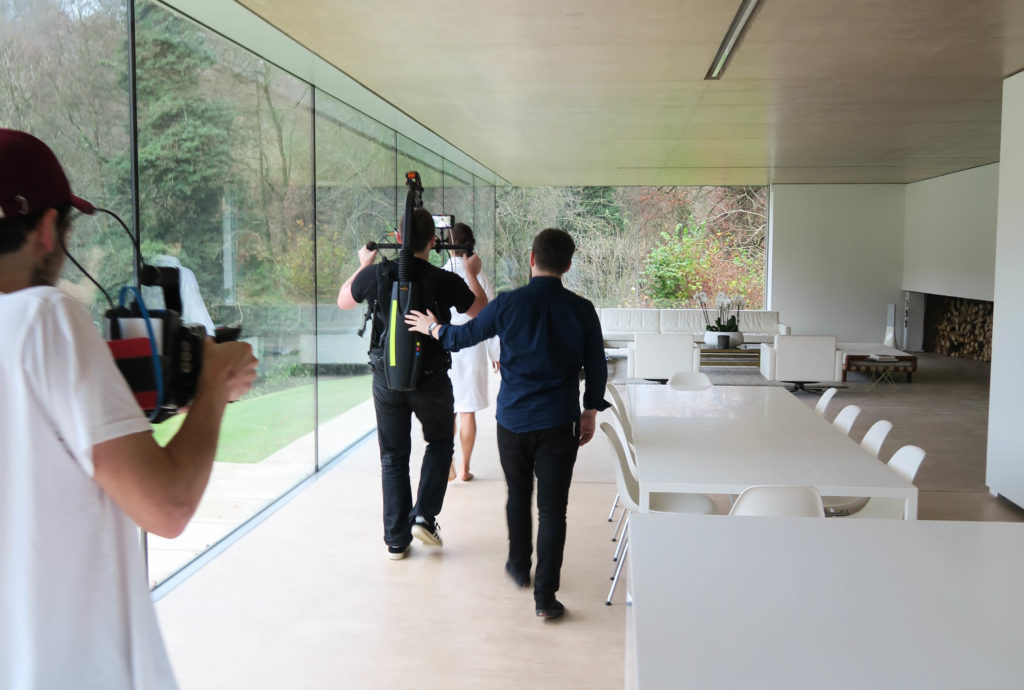 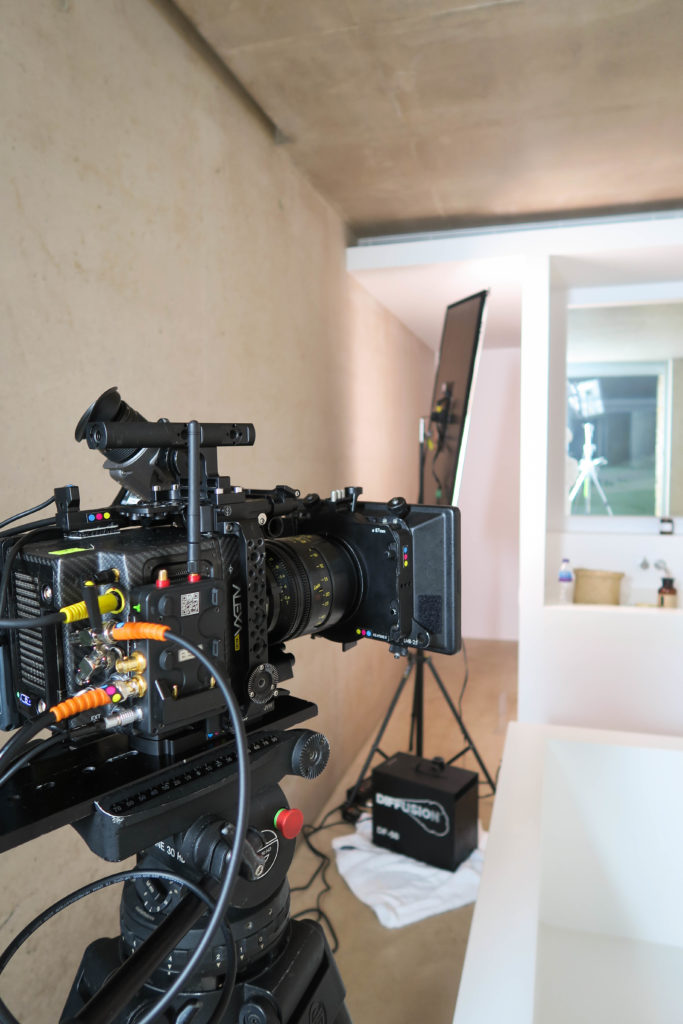 Snazzy kit came out for filming the video (which I’ll share as soon as I get the go ahead). 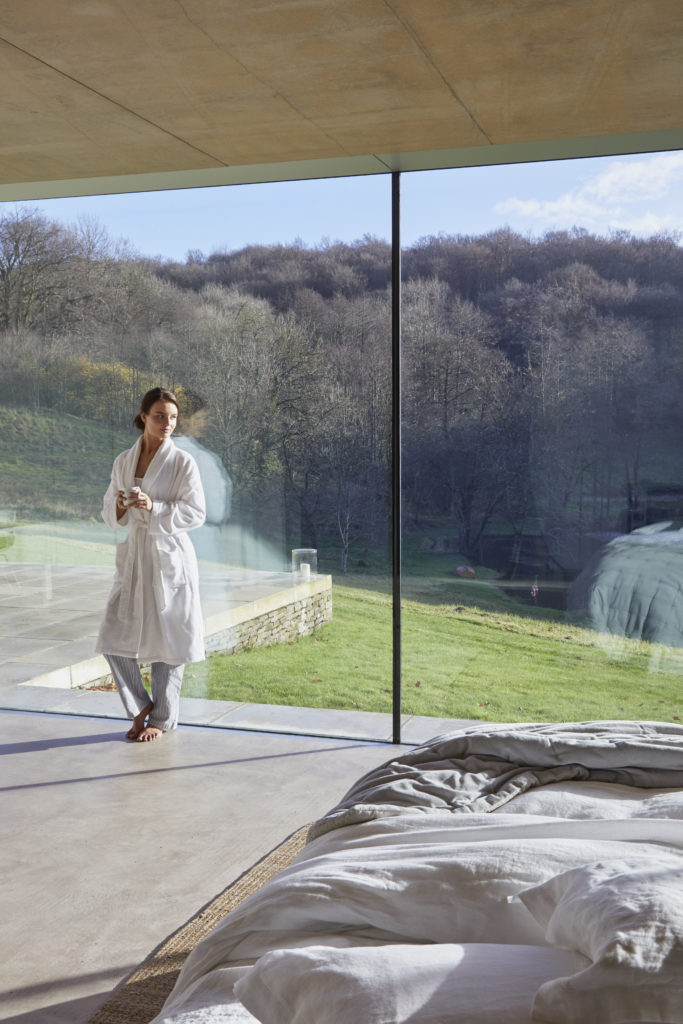 Working in a building with so much glass made for reflections galore – sometimes in a good way, sometimes not so much!  The solution was to drape black sheets over furniture so it wouldn’t show in reflections.  As you can see, the beaut location was completely secluded, and tbh was almost creepy to leave in the dark evenings.  Blair Witch kinda vibes driving up the long windy track!  Definitely confused the John Lewis delivery driver, that’s for sure. 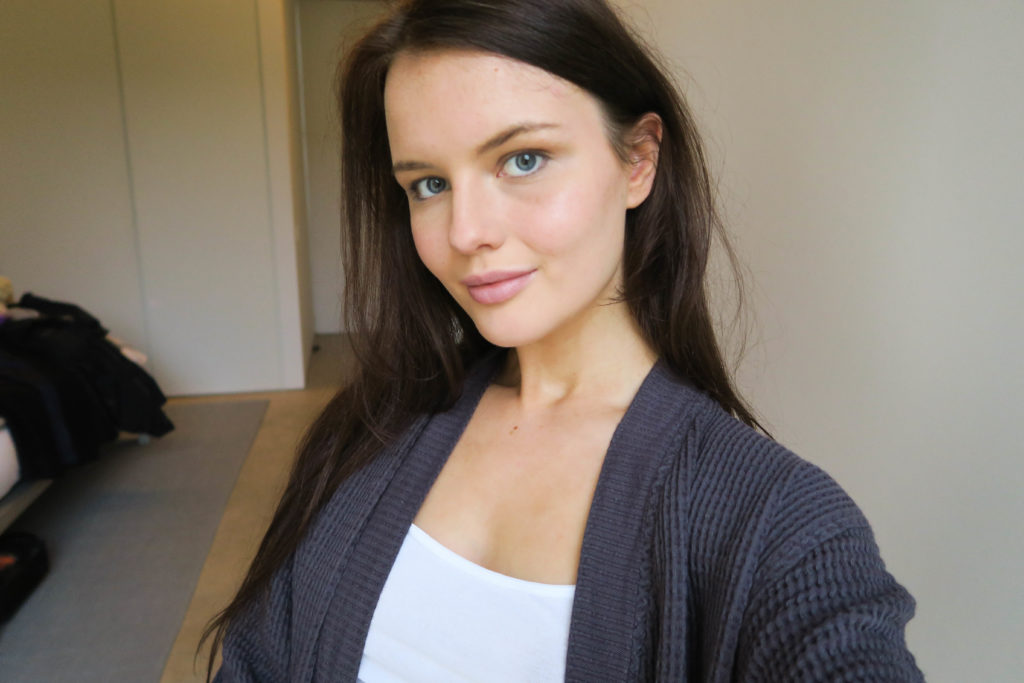 The aim was to look like I was chilling at home with no makeup on (oh how I WISH this was my home lol) so Sam gave me super natural makeup. 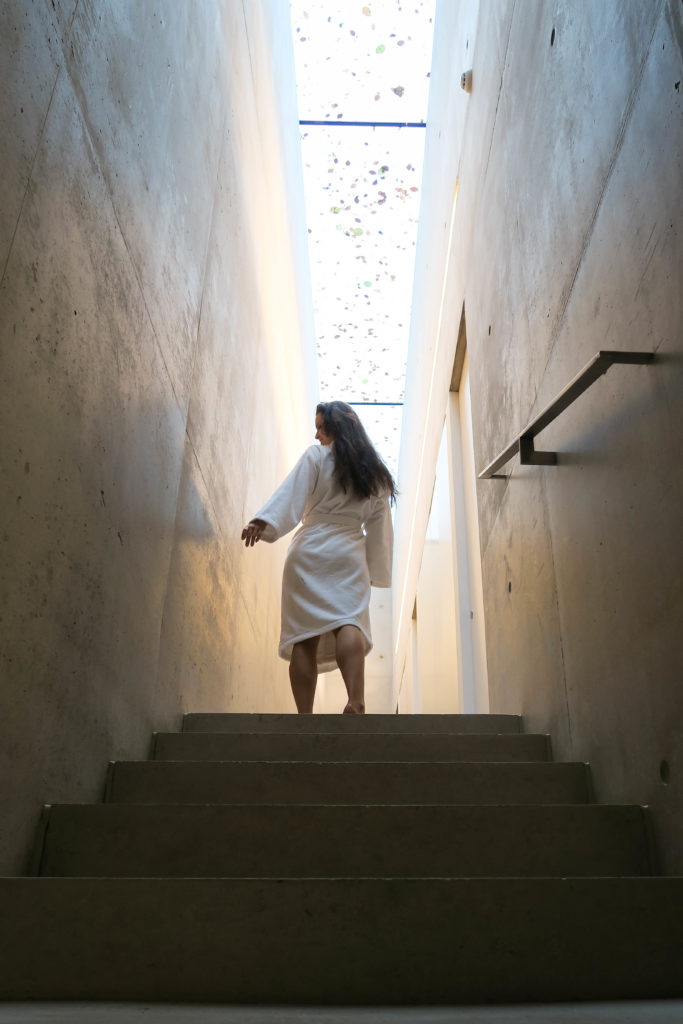 Obviously had to make the most of the location for my own Instagram too.  Couldn’t pass up that one. 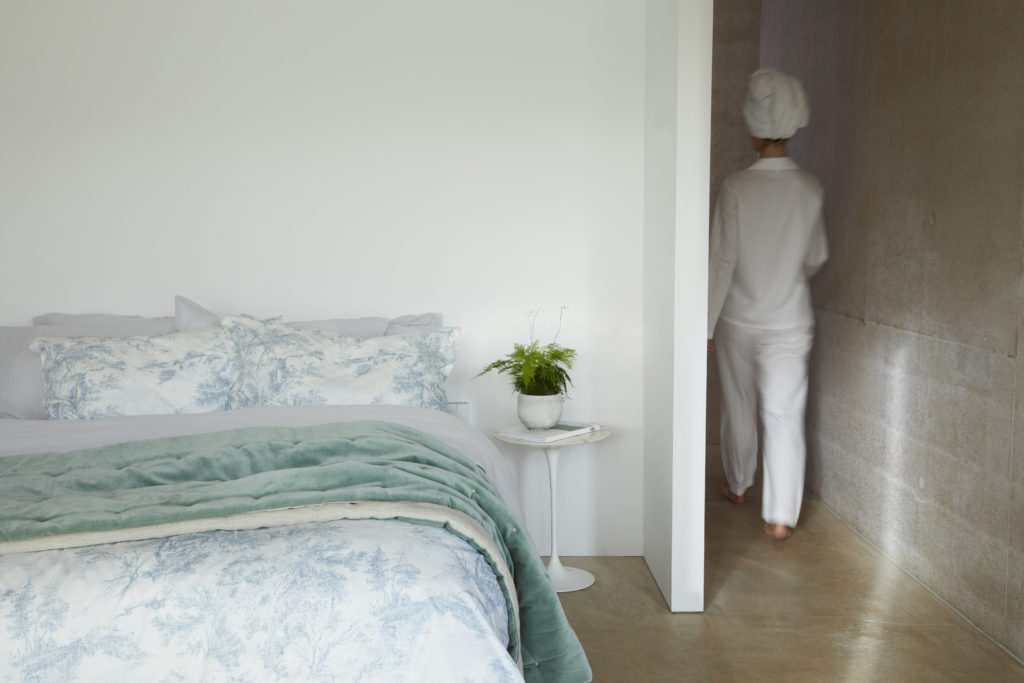 Getting the right amount of blur took many attempts of walking backwards and forwards through that door. 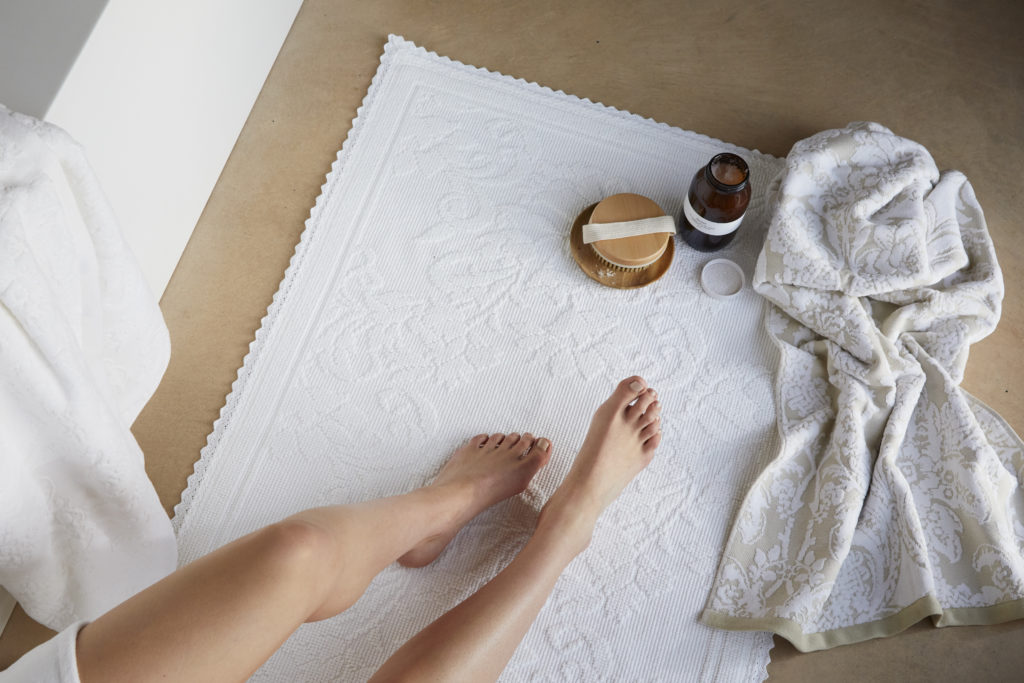 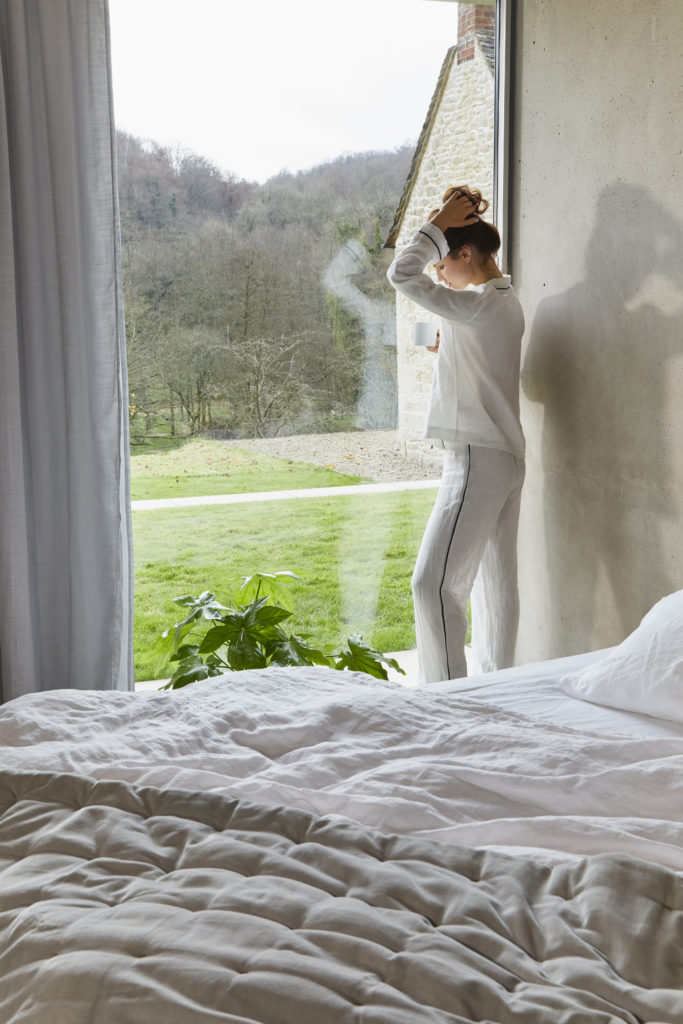 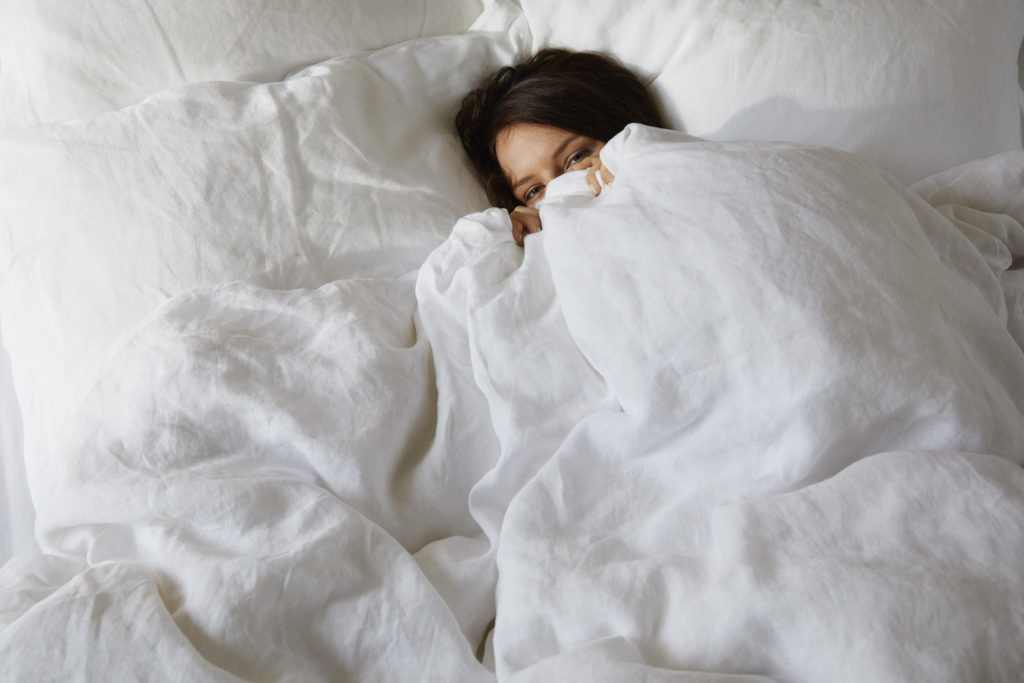 There you go, a little insight into what goes on behind the scenes for this kind of campaign.  And it all started with an Insta snap of a towel.  Power of the internet hey!

This post is sponsored by Christy Home, but all opinions are my own (go buy their towels though, they’re top notch)