being soft, strong, feminine and a girlboss all in one 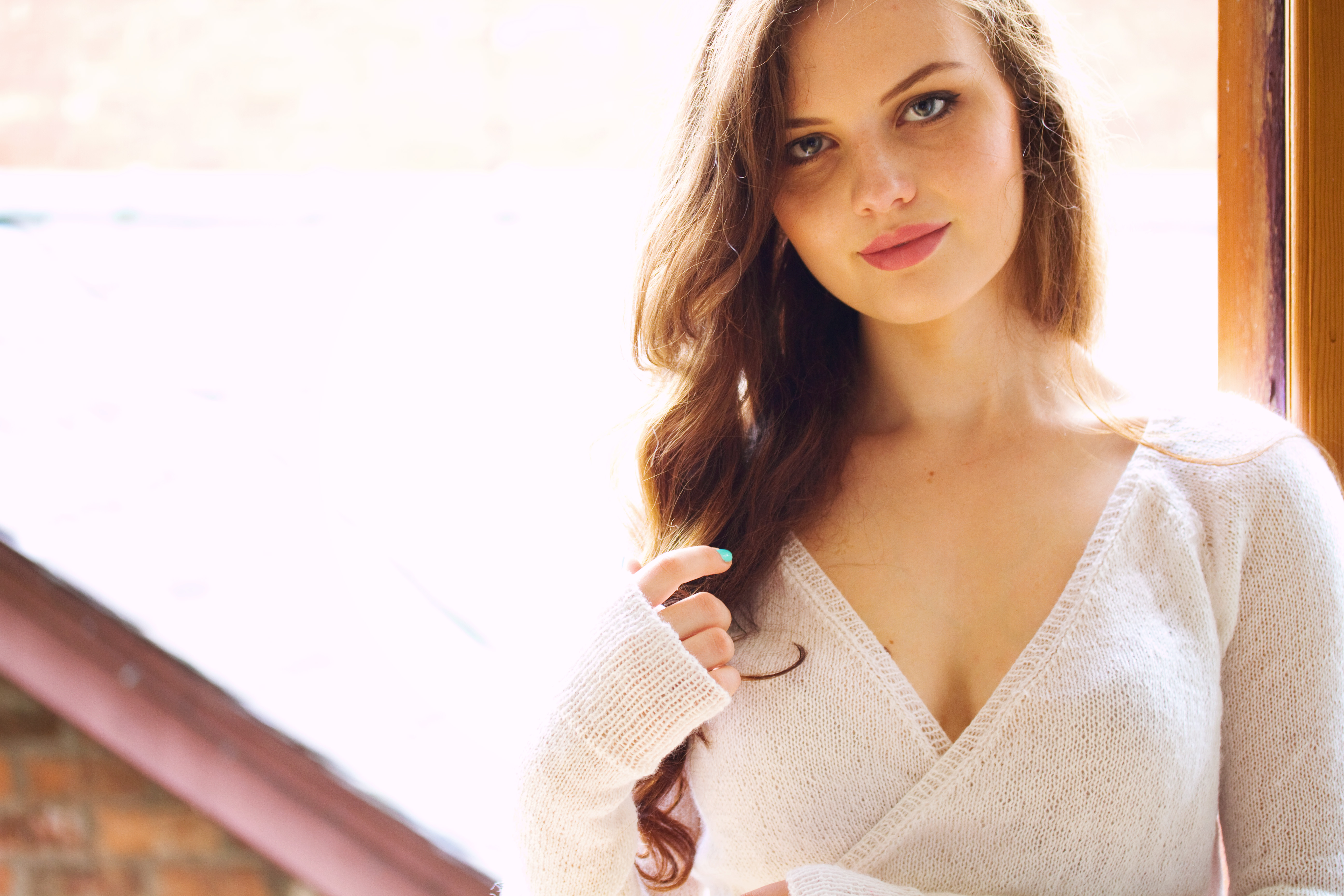 Bloggers: ever find yourself with a batch of outfit photos to use but you don’t wanna write about outfits?  That.  Me. Today.  (I’ll pop outfit details at the bottom though – it’s a handmade one!).   In typical blogger’s block style I started pondering what I could write about instead, thought of words that might give me a starting point… and I’ve decided on ‘soft’, what with the cardigan and that.  Because cardigans can be soft and people can be soft, and that’s a talking point. 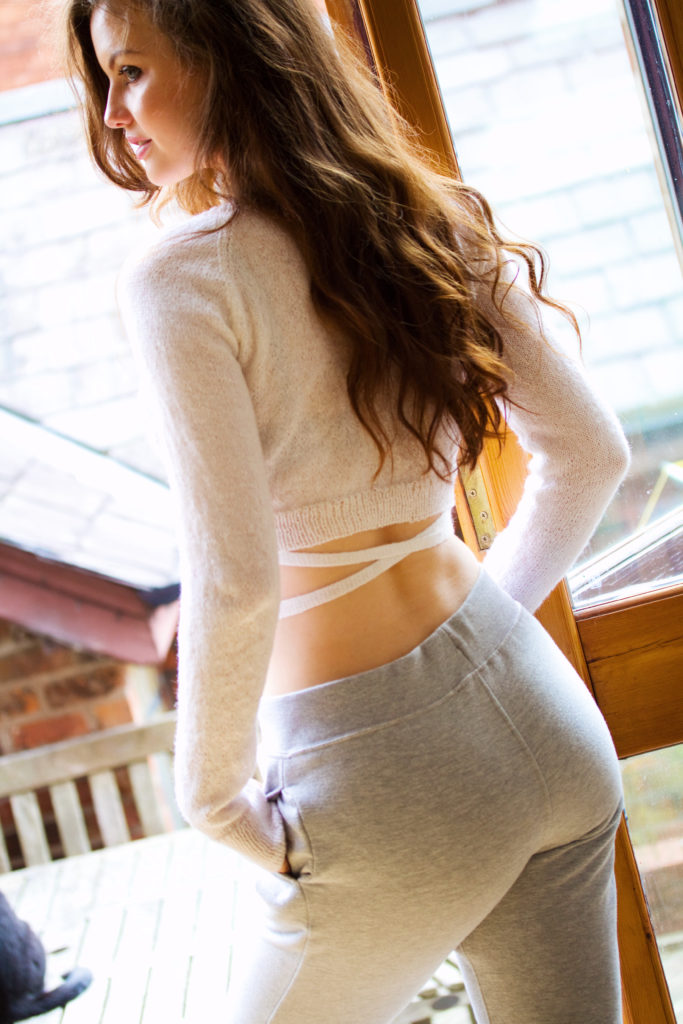 We’re funny ones, us humans.  We’re soft sometimes, and hard as nails on other days.  For argument’s sake I’m gonna say ‘soft’ means sensitive, thoughtful, and generous – and maybe a little vulnerable too, because we all have those days where we feel like a gust of wind could blow us over.  Wow weird metaphor Lily.  We have times when we feel like we need looking after, and times when we do favour after favour for people because we haven’t the balls to say no.  We can wear our hearts right there on our sleeves and be too naive and get hurt, a lot.  Everybody’s been there and felt weak and… well, pathetic.

Of course there’s the flip side too – that sassy girlboss who’s ready to take on the world and nothing’s gonna get in her way.  She’s tough, not soft.  She doesn’t need anyone to look after her.  We all have it in us to be this girl – indestructible and confident and able to say yes or no to whatever the hell we like.  Those days are good.  Strong is a good feeling.

Thing is though, come across as the strong capable one all the time, and things go one of two ways: people either see you as a hardfaced bitch, or assume you can take any sh*t they throw at you.  People generally won’t feel like they can take the tough girl for granted, but they’ll also underestimate the amount they can hurt her.  Even if the hard exterior’s purely that – an exterior – where underneath lies someone with all the feels to get hurt.

I guess it’s kinda similar to how social media can give the impression you’ve got your shit together, when the reality couldn’t be further from the truth.  We’ve all heard of the guys who like to come across all big and tough but are really big softies underneath.  They’re the #girlboss equivalents.

Part of me thinks the girlboss ‘woman who don’t need no man’ image has become such a big thing that it almost seems like a failure to not be a badass single girl.  But there’s a difference between wanting someone and needing someone, don’t you think?  And femininity can mean both soft and tough in so many different ways.  I know the whole ‘modern independent woman’ idea can confuse the hell out of guys too, because nothing’s ever quite so clean cut.  There’s a grey area surrounding what remains of traditional boy meets girl roles – I know boys who like taking their girl out and treating her, and girls who like to cook a nice meal for their boy.  That’s perfectly fine, as is the other way round, or whatever floats your boat that day.  Combining the cuteness of some ‘old fashioned’ stuff with sassy independent girl definitely makes for grey area though.

Showing a softer side to the girlboss isn’t necessarily a weakness.  We have this image in our heads that strong women are the ones in the power dresses with the killer heels and a ‘don’t f*ck with me’ strut, when in reality a quiet confidence is all that’s necessary for people to know not to f*ck with you.  In theory.  People do it anyway.  Strength as a female doesn’t need to come from acting like your testosterone levels have boosted.  I like being girly, I like being strong and girly, and like Vix Meldrew so perfectly explains here (as she always does!) I like strong, sensitive guys too.  🙂 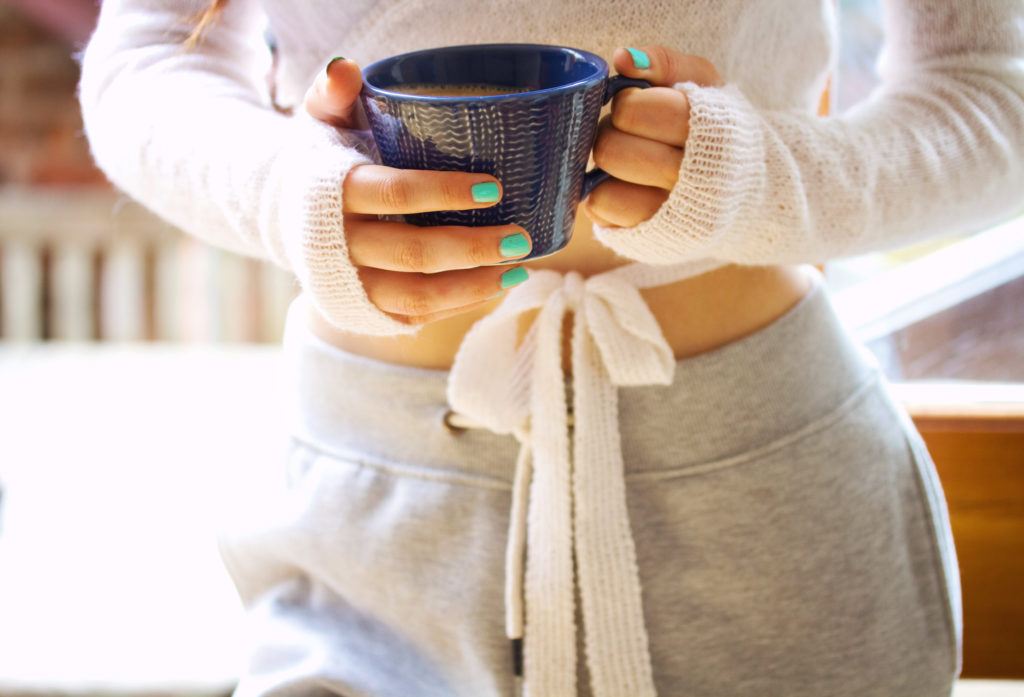 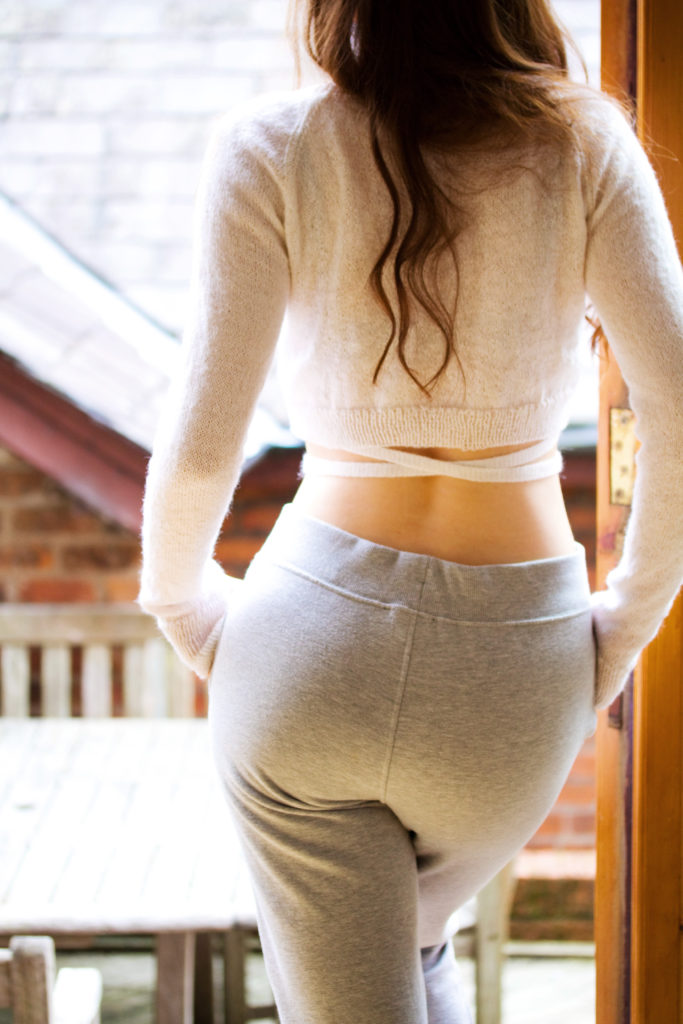 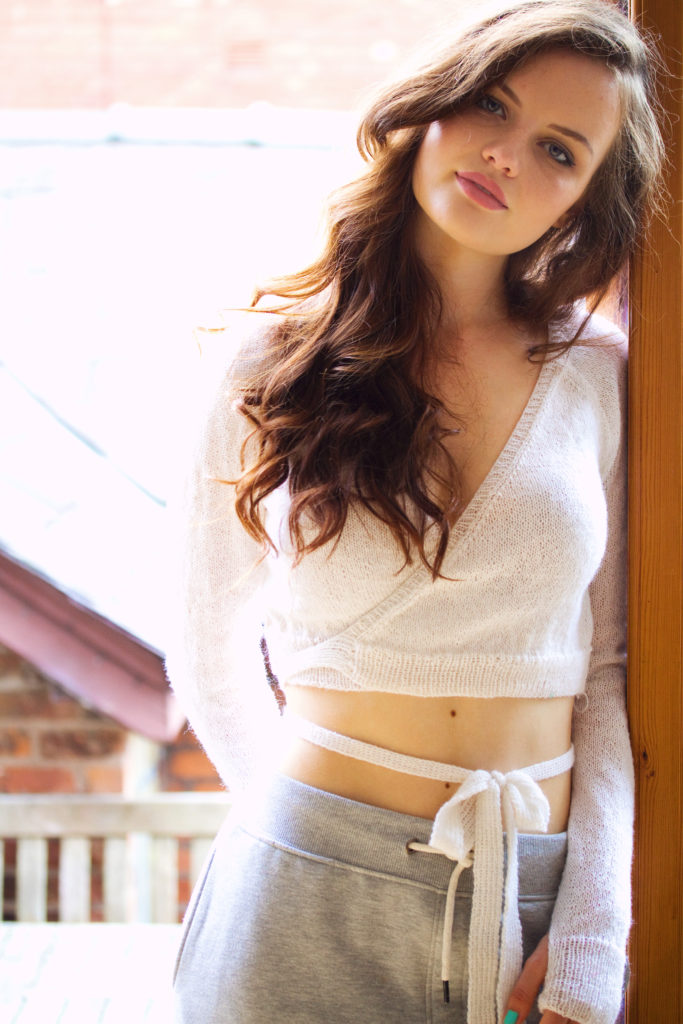 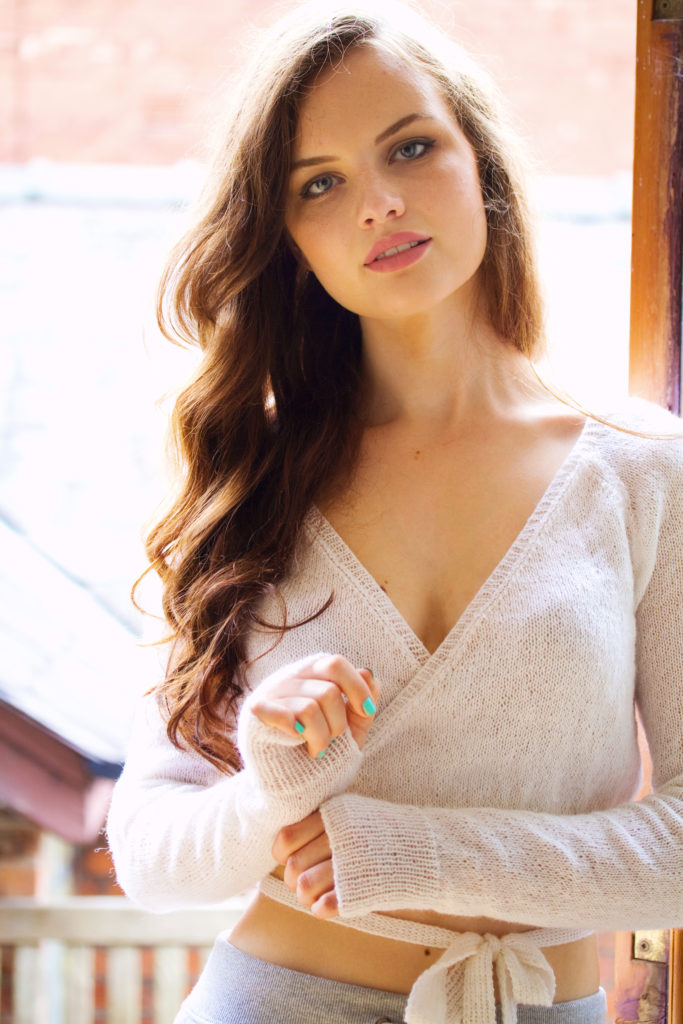 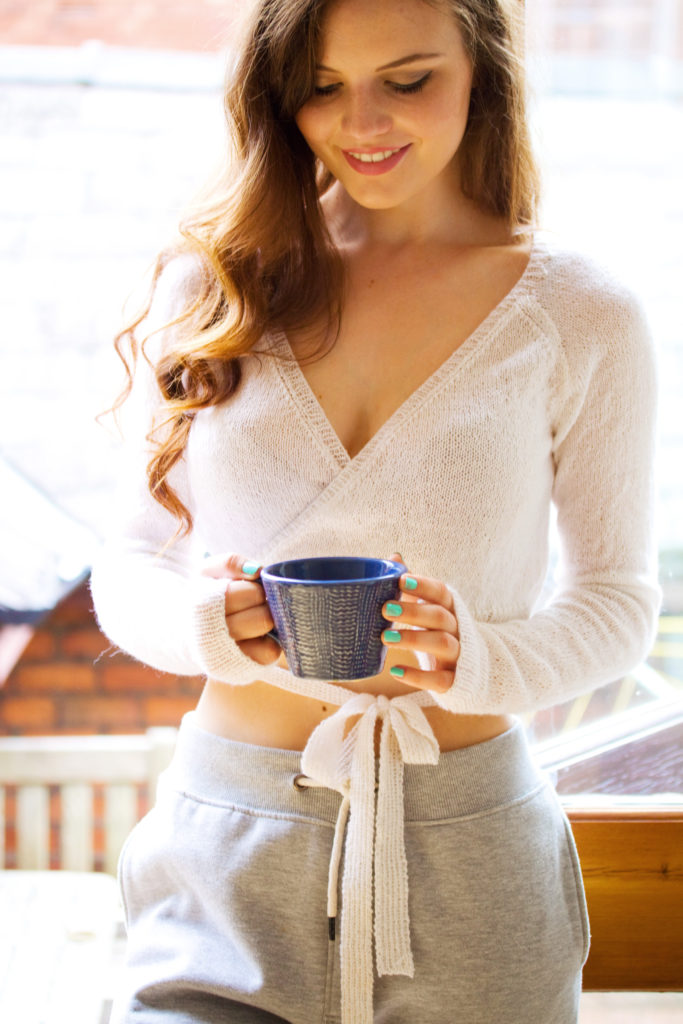 Now for a wee bit of outfit chat, of course. 😉  Another handmade item this time – another version of this cardigan my mum and I made last year to be exact.  I loved the first one so much that another seemed like a good idea!  With a modification of thumb holes this time, just because.  Ballet cardigans are just so soft and cosy and lovely.   Long time readers might remember that the first cardigan ended up crossing the atlantic to play part in a strangers’ wedding in Canada (love that little internet story) – no similar plans for this one yet but if anyone’s getting married in the chilly months and wants to borrow it, I’m your gal.  I wonder how it would look styled with something more glamourous than my brother’s joggers.  😛