top of the tower

Given that I’ve said many a time how I love playing ‘tourist at home’, you’d think I’d have made the most of the ~tourist attractions~ on my doorstep.  You’d think wrong.   I’ve walked past the Blackpool Tower maybe… 100 times in my life, I’ve watched dancing and eaten afternoon tea in the Tower Ballroom, but never actually been up it.  So on a sunny Tuesday last week when I had nothing pressing to do, I randomly decided to make a day trip of it with my brother.

Apparently half the schools in Lancashire also chose last Tuesday as Tower Trip Day so our time was spent tactically avoiding hoards of 6 year olds, but oh well.

Where else can you stand on a glass floor, 390 feet in the air, see god-knows-how-many miles around, and go a little bit jelly legged when you look down?  Probably many places, but allow it OK. 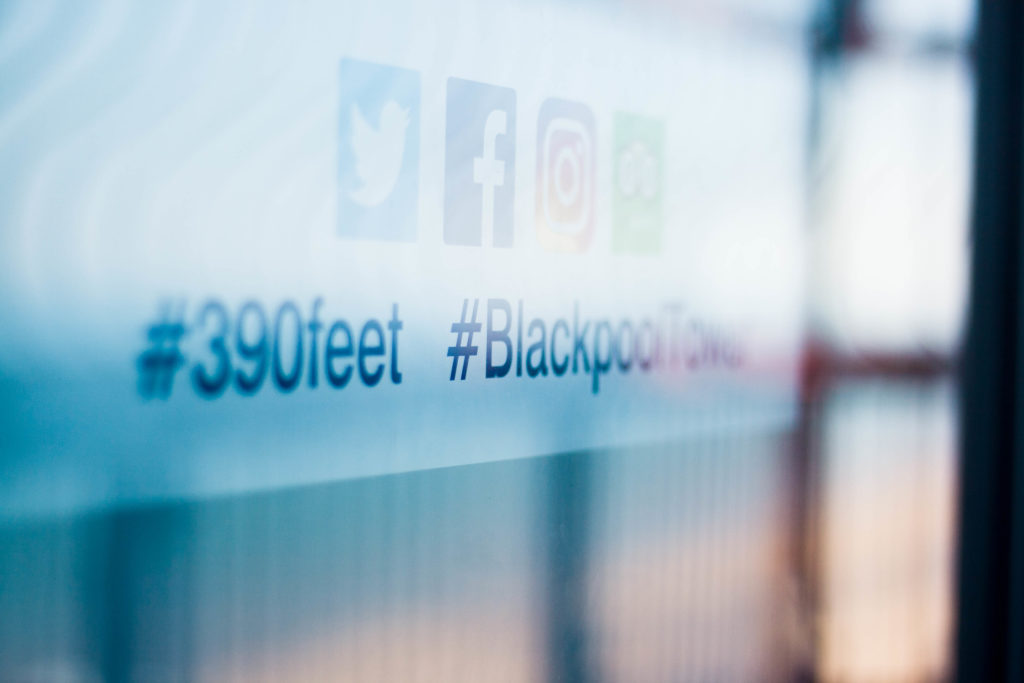 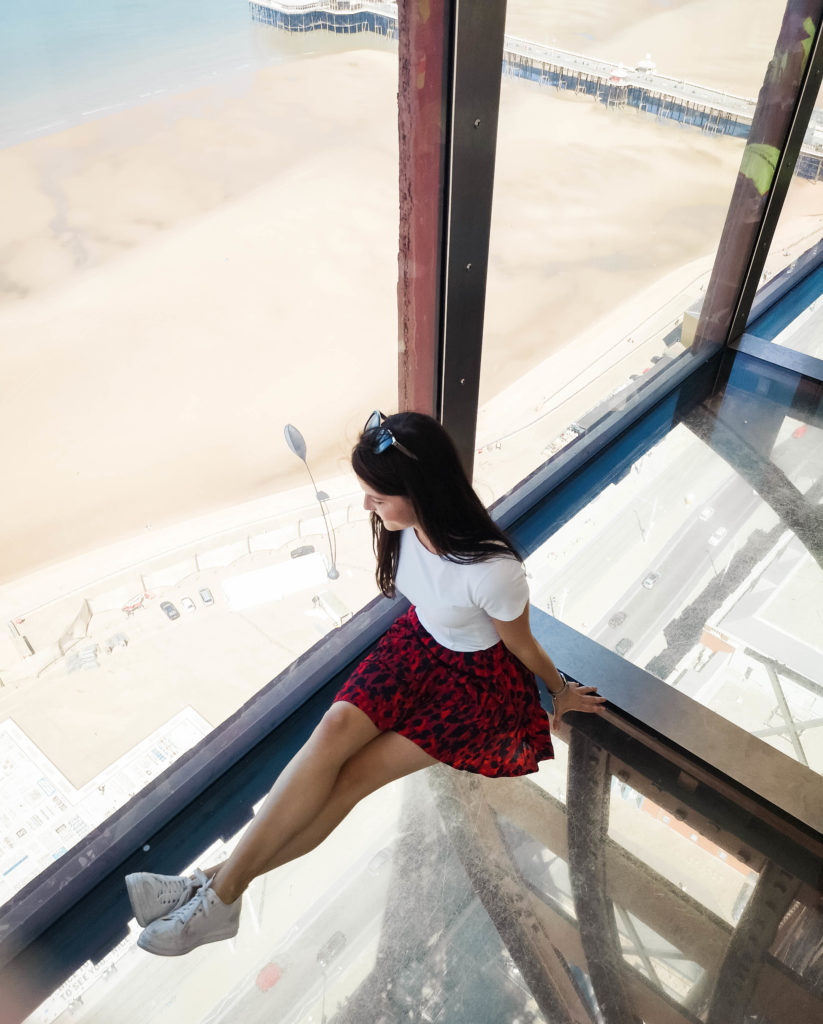 Looking chilled, feeling like I’m gonna get my feet back on nice opaque ground ASAP.  Freaked me out a little more than I should probably admit but hey, gotta get the shot.

After watching the 4D cinema show with a little history of the tower, we actually headed straight up the stairs to the higher levels and left the glass area for later.  Obviously the higher levels are netted so the view isn’t quite as clear, but it’s cool to be out in the fresh sea air so high up.  Heights don’t bother me as such – as long I feel like I’m on something nice and sturdy.  5cm thick glass might be able to support 6 rhinos or whatever but it’s transparent and therefore 10x scarier than good old metal.  By my fantastic physics student logic anyway. 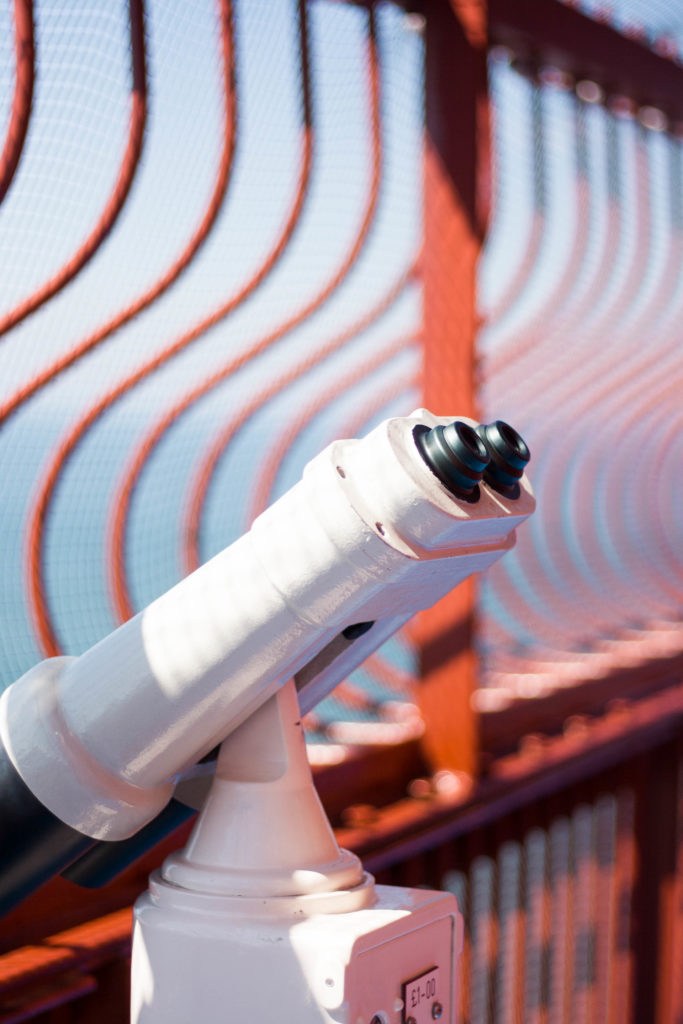 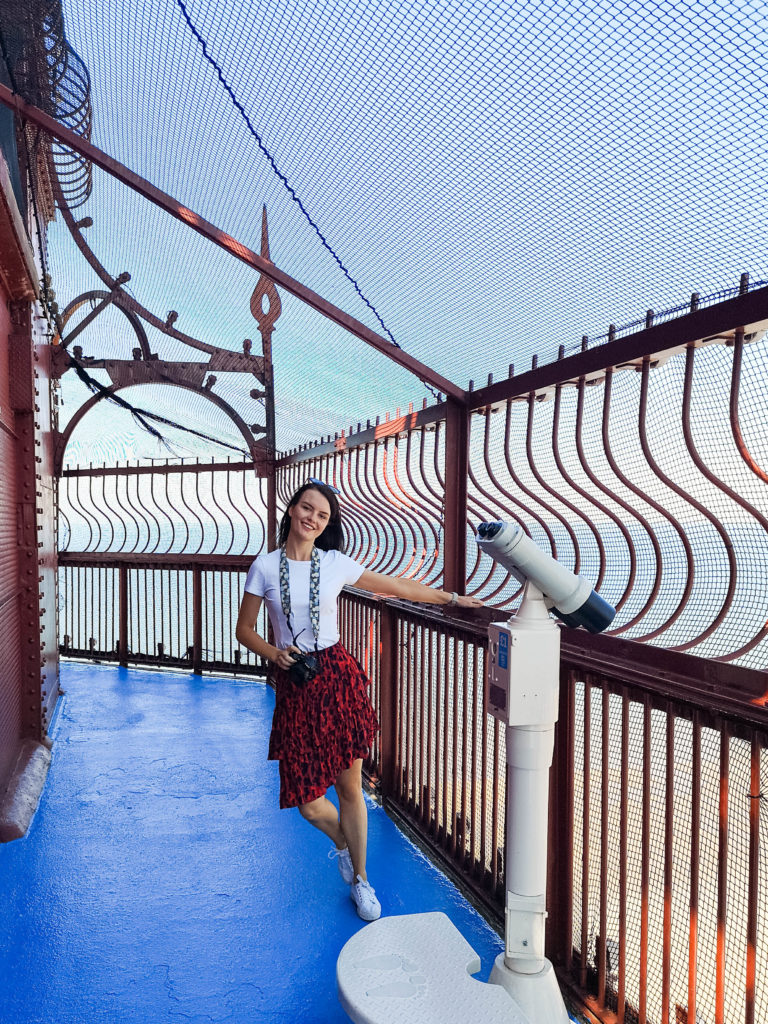 Crowds of Year 2s avoided, we set about the very complex game of ‘what can you spot’.  Objects included my car in central car park, Southport pier, the Cumbrian fells and (we think) the Isle of Man.  It’s also pretty striking to see from up there just how flat Lancashire is – funny how a different perspective makes you realise the obvious isn’t it?  There’s a deep and meaningful metaphor in there somewhere I’m sure. 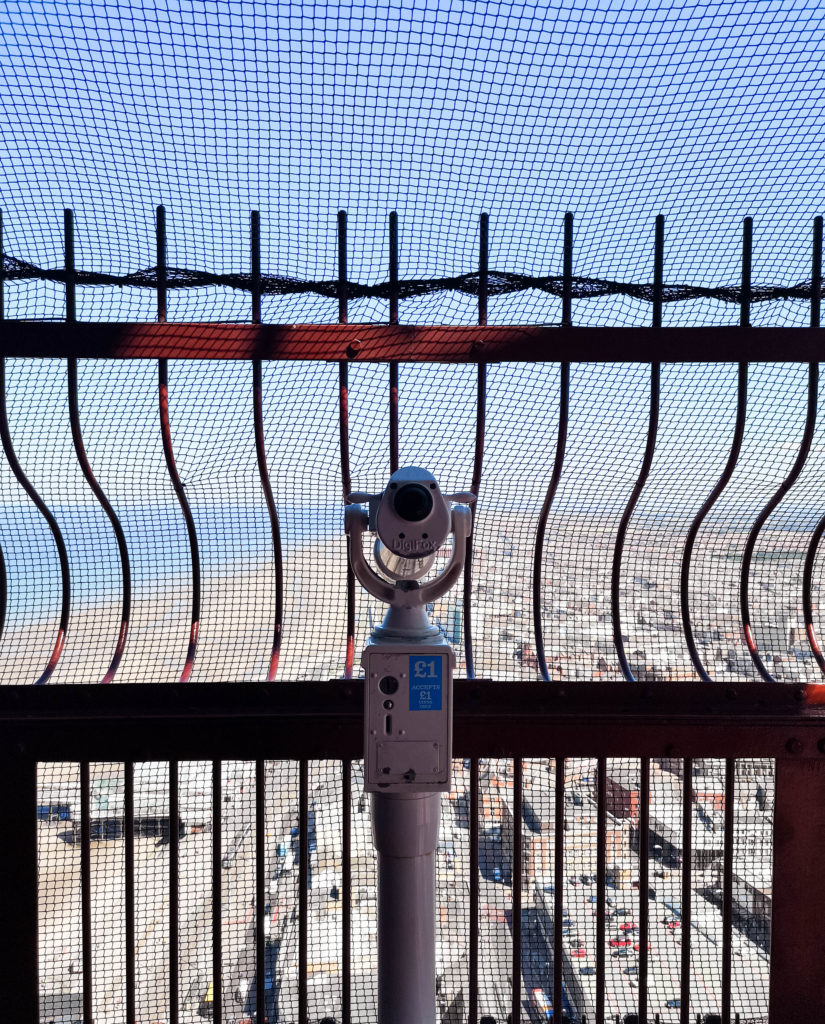 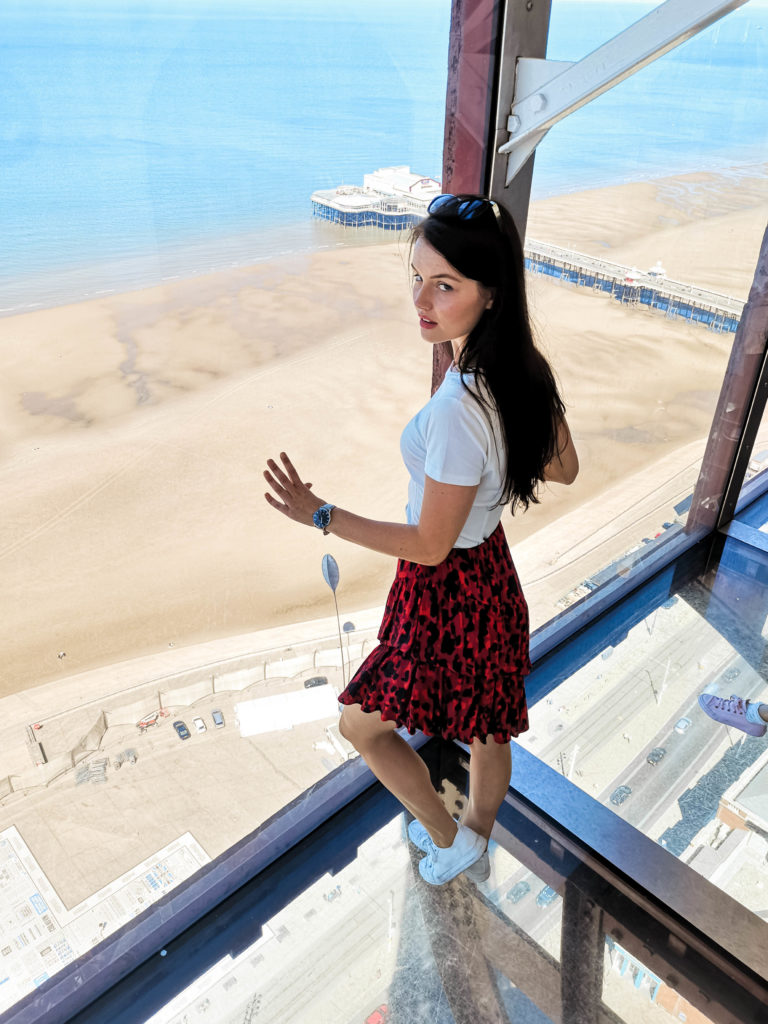 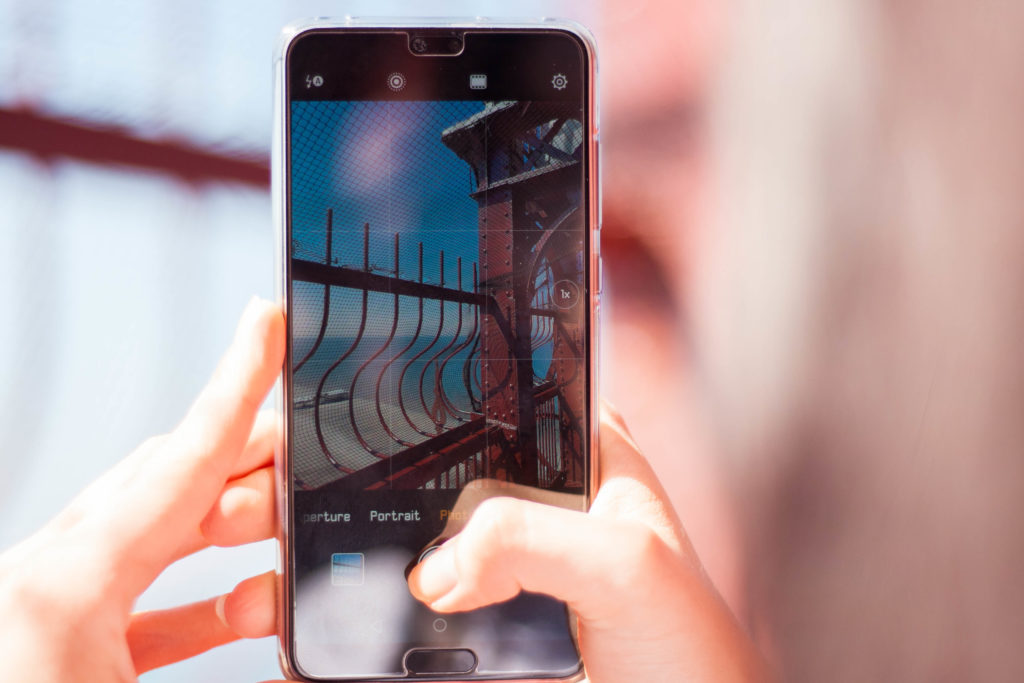 Something else I must mention is that half of these photos were taken on my new phone – it’s rare I share a phone snap on the blog, but I think that will be changing from now on!  I’ve had the Huawei P20 Pro for 6 weeks or so now and absolutely love it.  Was definitely chosen for the camera quality, which I’m still fangirling over tbh.  Especially portrait mode.  Oh how I love portrait mode.  I still used my SLR for some shots because you just can’t fake that 1.8mm lens blur, but others (like this overexcited treat below) were shot on the Huawei. 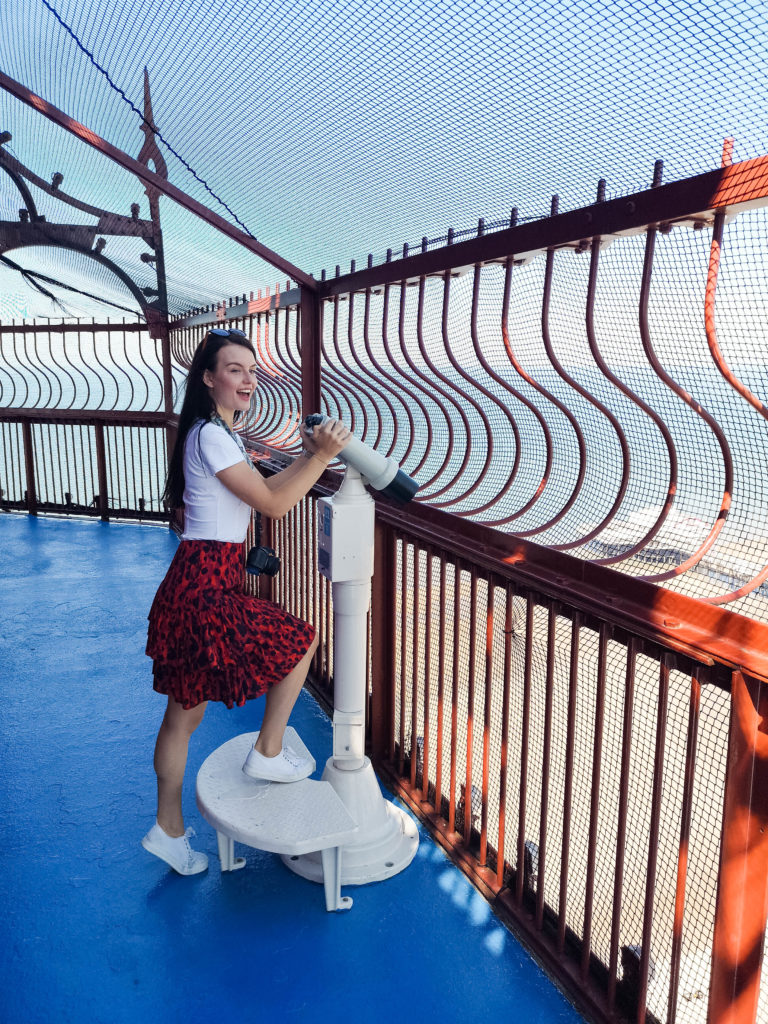 The thought of people hanging from the outside of the tower freaks me the hell out.  How did they even build this thing back in 1891?  The whole process must have been crazy dangerous.  Hats off to the people who were (and still go) up there on ropes, you’re made of far stronger stuff than I am. 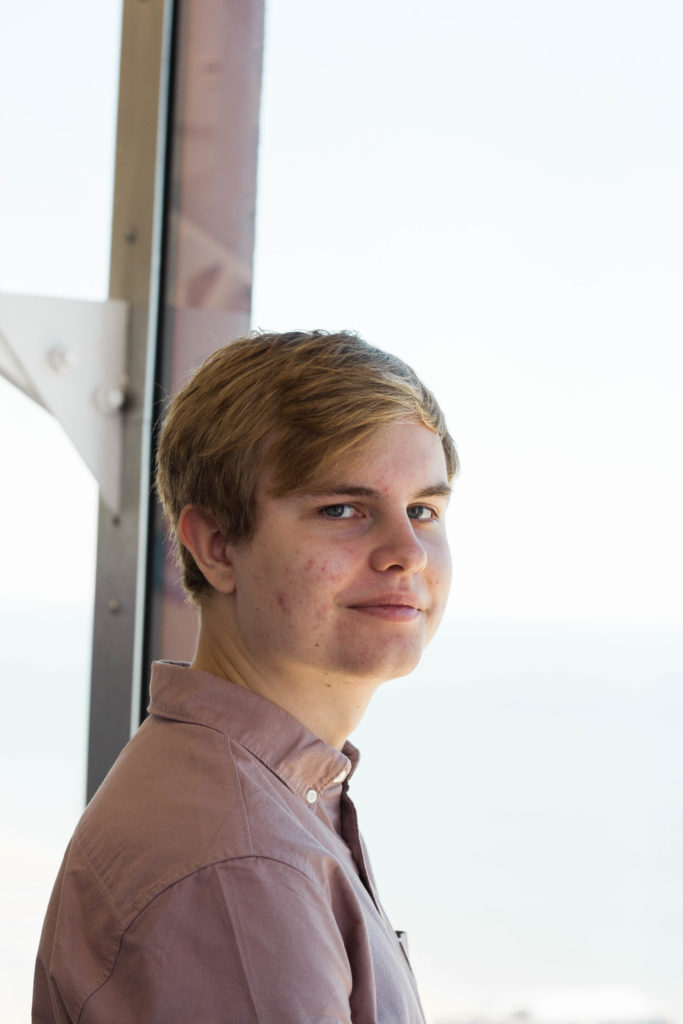 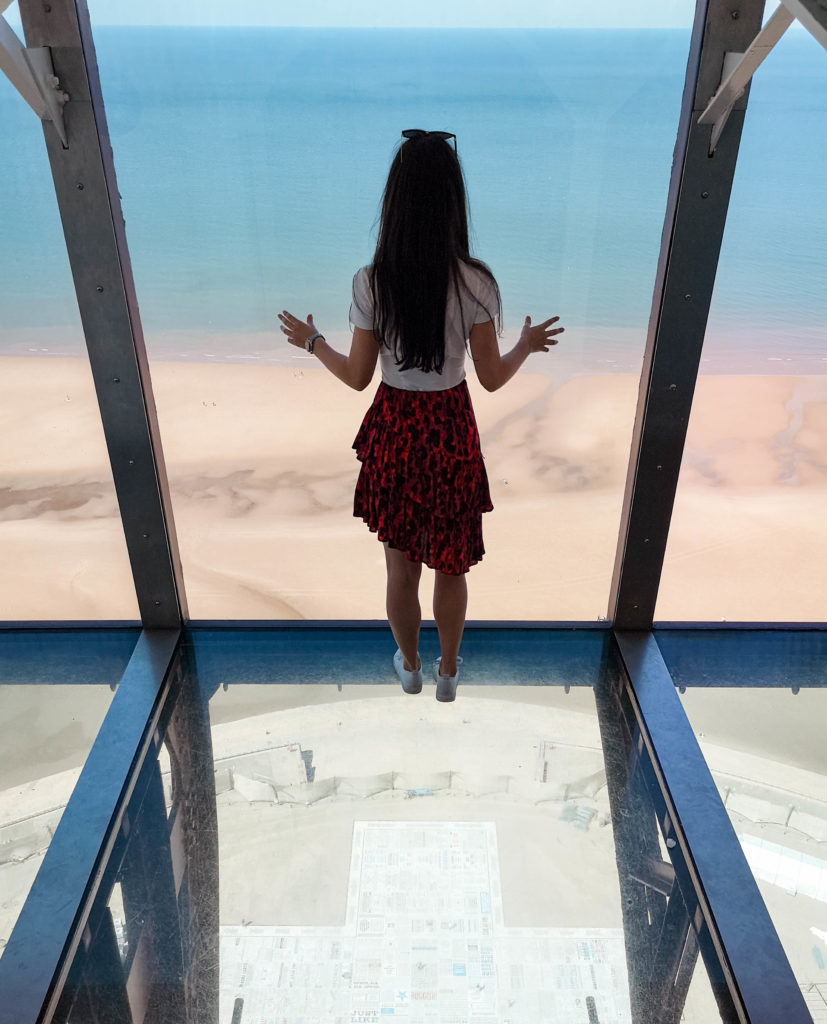 Shot on the Huawei with Joel holding the phone above his head and hoping for the best, in this case. 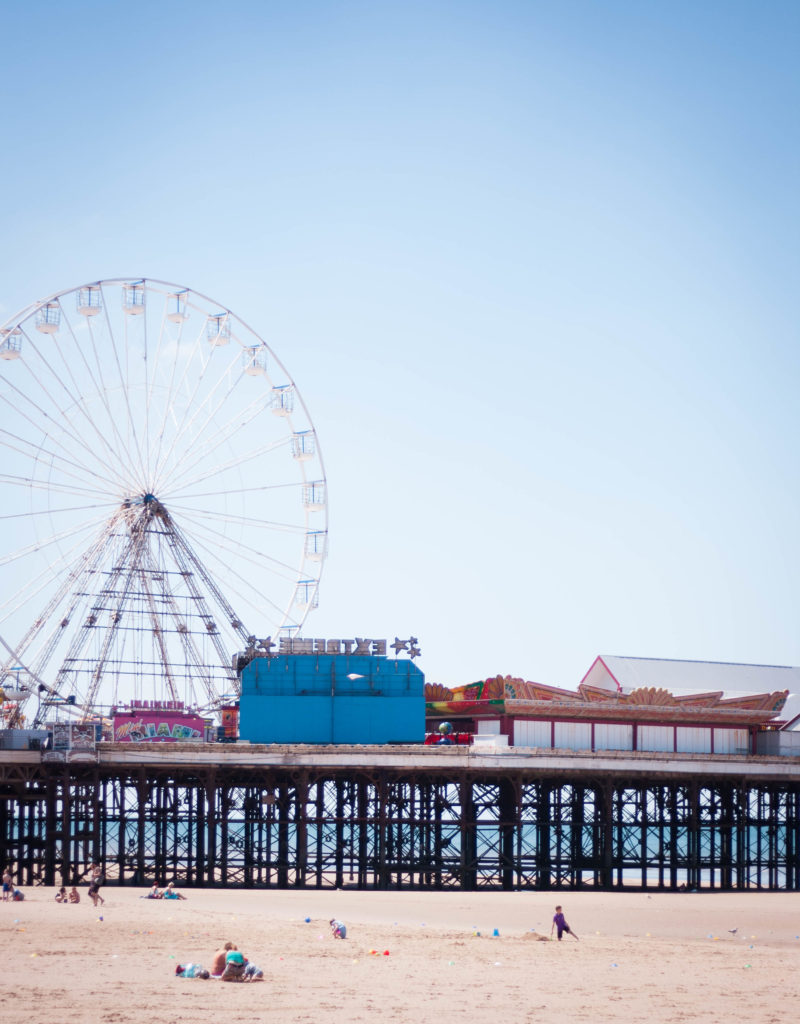 There’s no denying that Blackpool’s tacky in parts, but I’m pretty sure that’s what everyone likes about it.  Good old tacky British seaside fairground rides and all that. 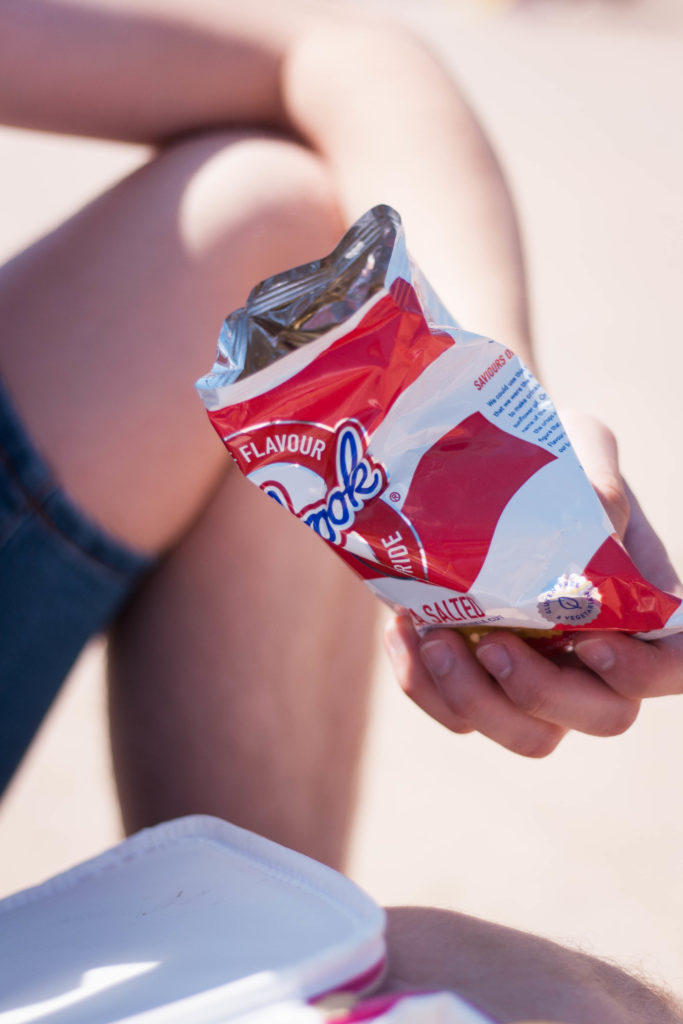 No trip to the seaside is complete without avoiding divebombing pigeons whilst eating a picnic (of sorts) on the promenade.  It’s practically mandatory. 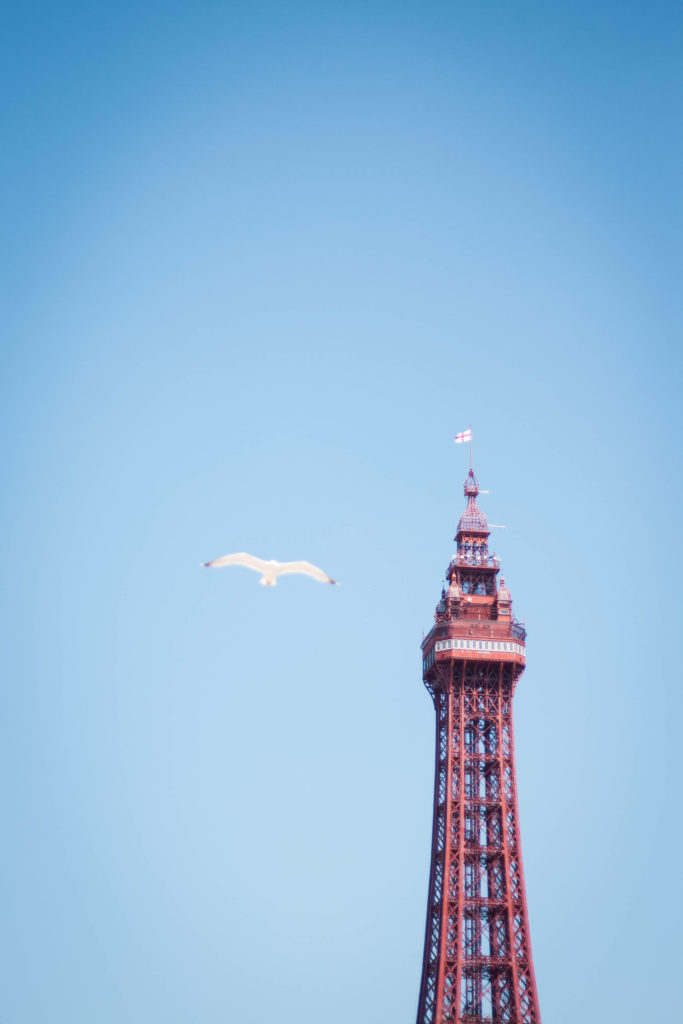 Not to mention the Tower makes for a pretty photogenic spot! 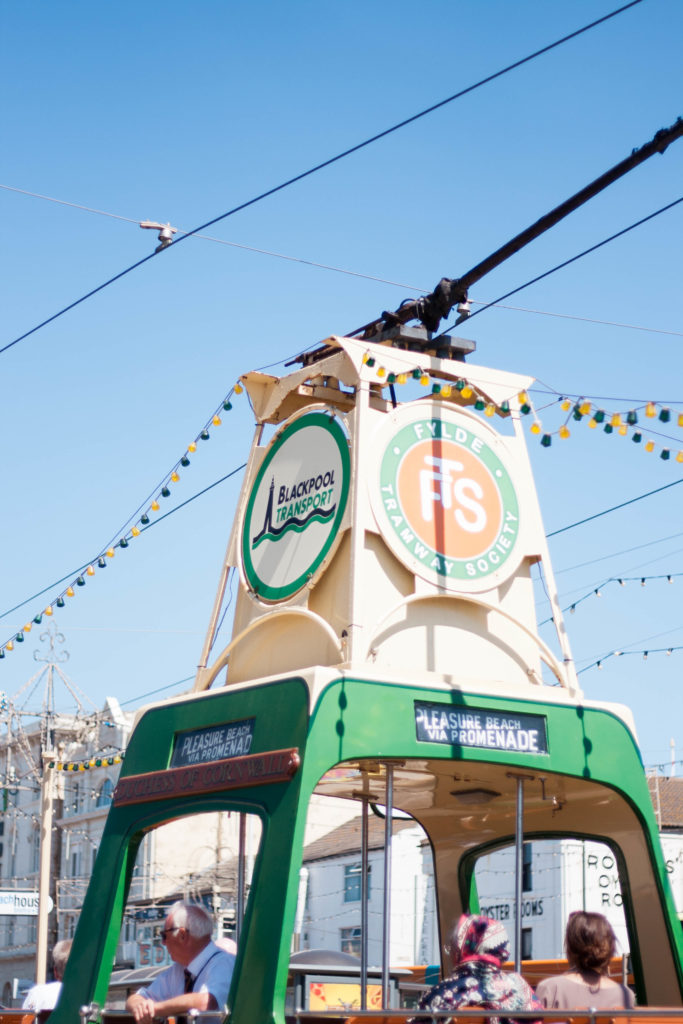 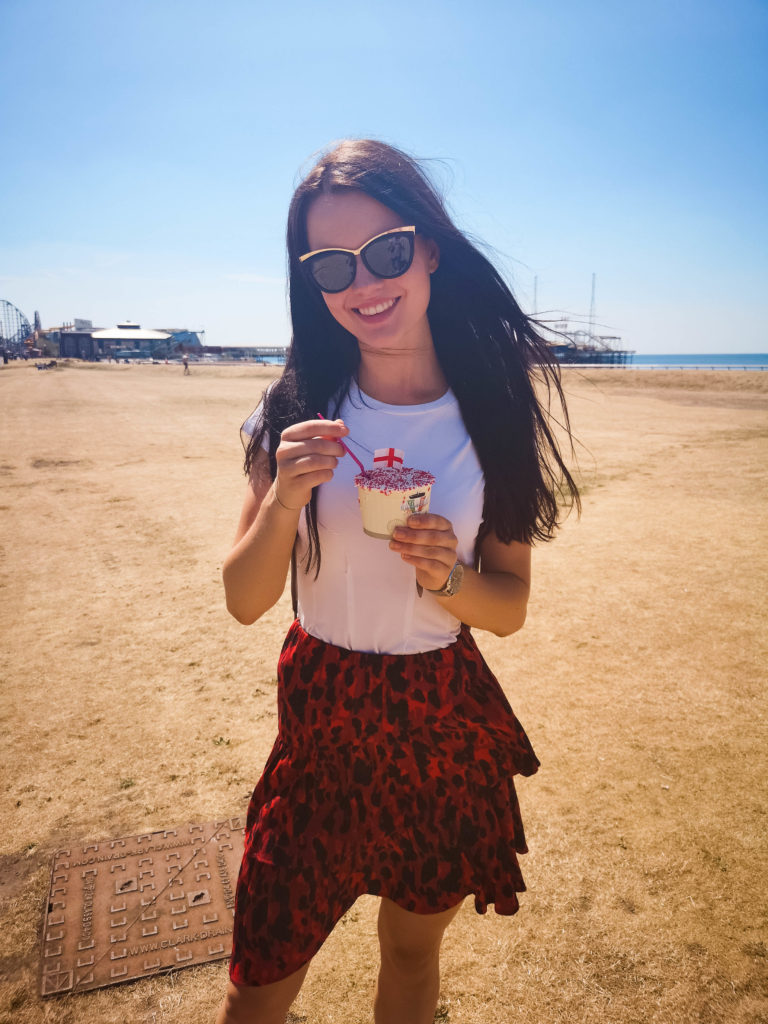 As I mentioned, I’ve been to Blackpool many times, but still failed to remember how far the walk is between the piers.  And so Joel and I walked a good mile and a half each way for an ice cream.  No regrets (except Joel’s choice of a cone rather than tub, which melted all down his arm).  Notarianni’s is the classic Blackpool ice cream spot though so had to be done, England sprinkles and flag and all.