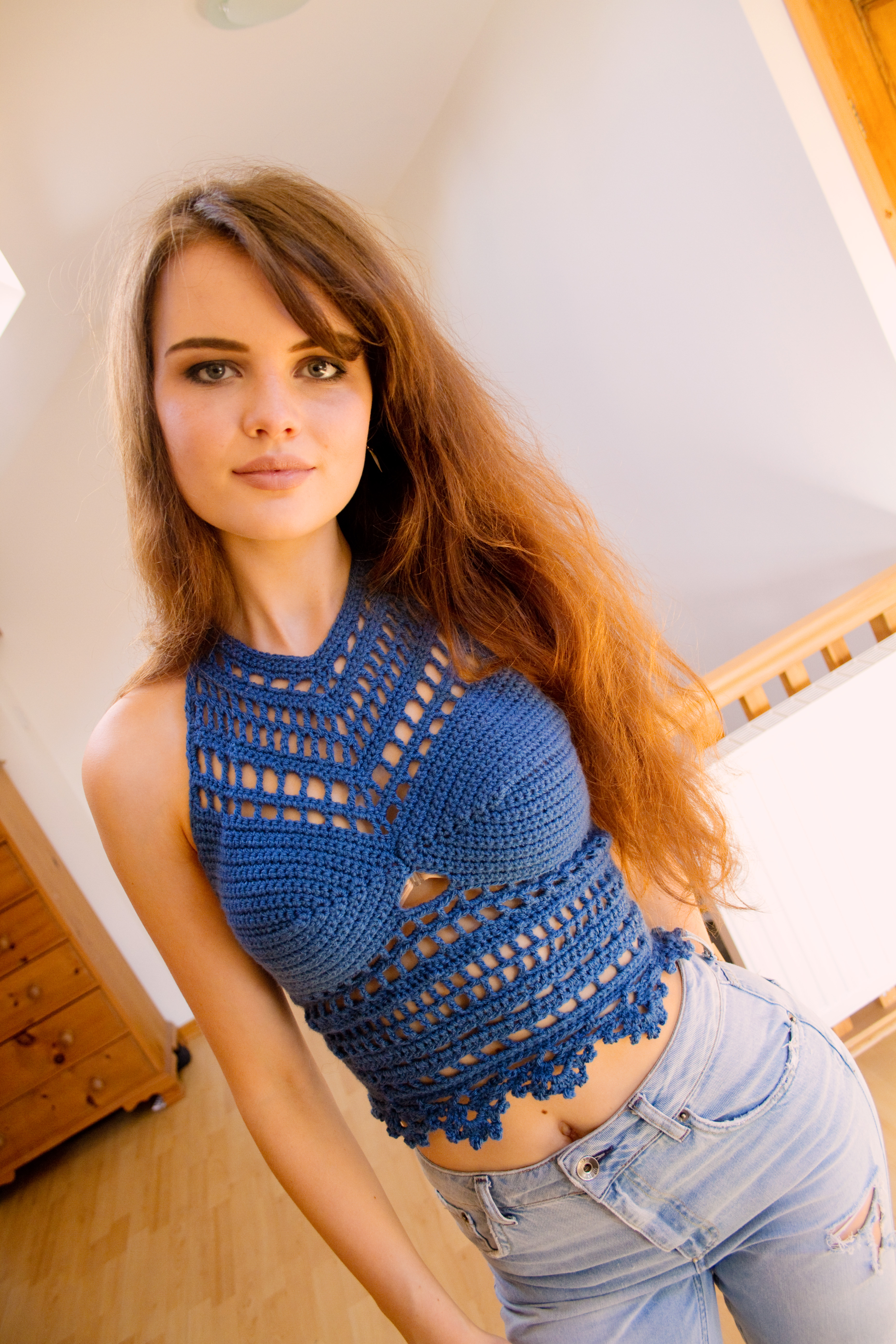 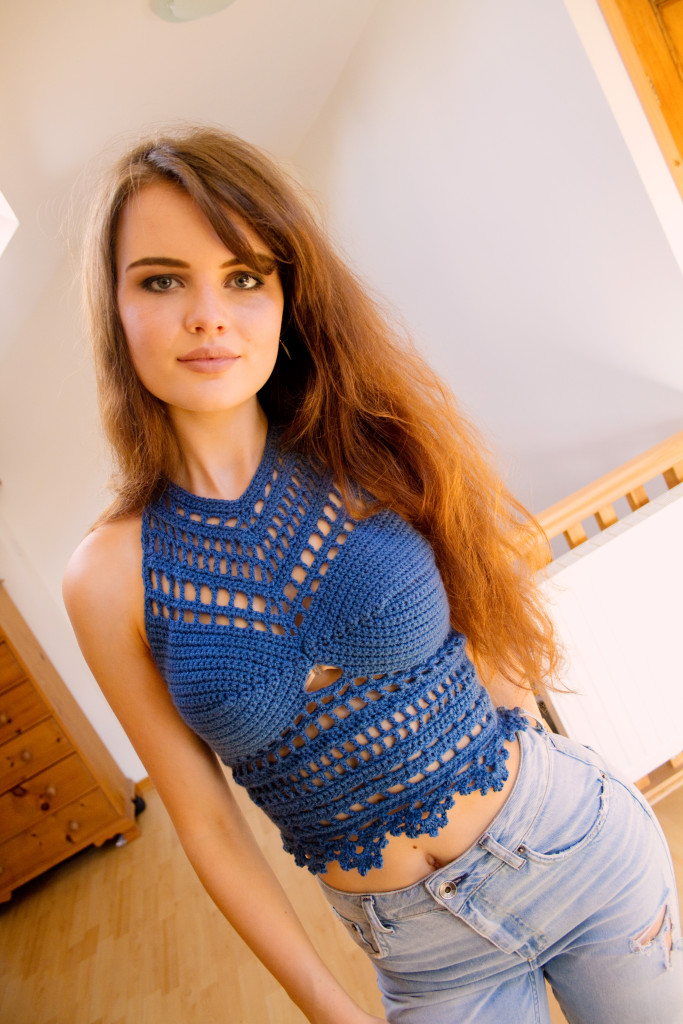 Finally finished the bralet I ranted about yesterday!  After much faffing, ripping and redoing, it fits how I like now.  Not too long, but backless.  Will always be a fan of all things backless. 🙂 I started crocheting the boobs in the car to this event last week (crocheting boobs – what else U do on car journeys?!?) and made the rest up as I went along, as per.  Lots of mesh because it’s so quick to whip up; random lacy edging I found online; lots of trying on and contortionism to look at my own back and figure out what to do next.  Using yourself as a mannequin can be pretty difficult!  Hopefully I’ll be able to get plenty wear out of this one since it’s not overly cropped.  I’m thinking underneath a loose denim shirt maybe? 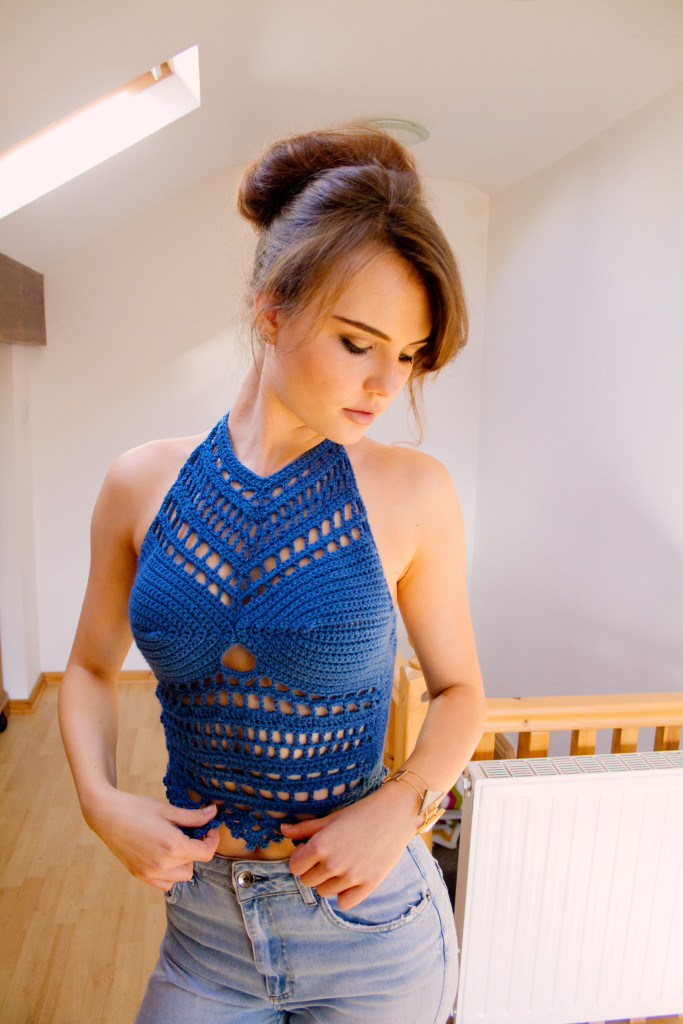 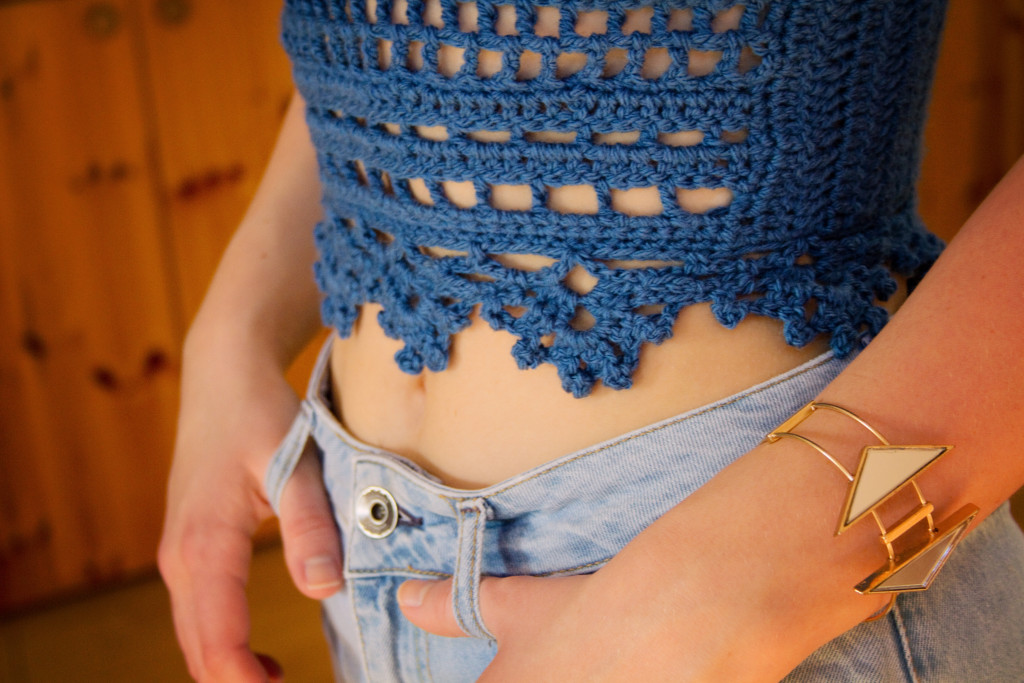 You’d think I’d have gotten bored of making my own clothes by now (cropped tops especially – I have enough of them!), but nope!  For years and years now I’ve almost always had at least one project in progress.  Can’t imagine not doing.  Crafty people will get my drift I’m sure.  I don’t really dedicate any time to making anything, just have something lying around to pick up whenever I fancy.  Very gratifying to wear the fruits of your own labour too of course. 🙂 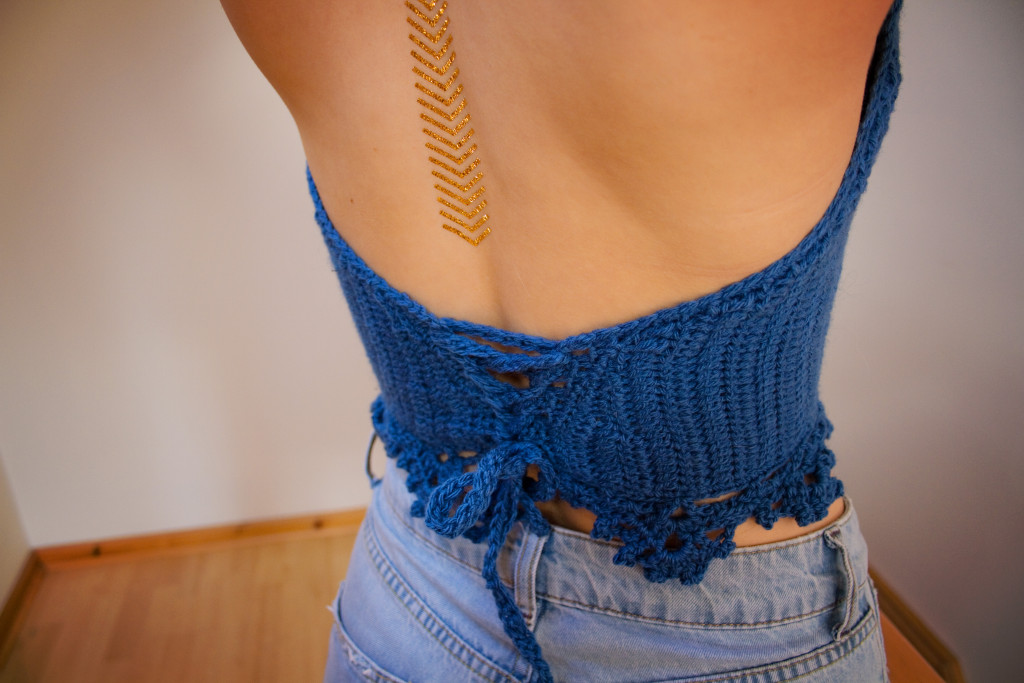 Crochet aside, I’m loving gold tattoos at the minute!  Playing around with temporary ones (this one’s from New Look) until I can *finally* have a big girl tattoo of my own.  Not too long ’til my 18th birthday now!  I’m not sure where I’ll actually want tattoos and what style so might as well try a few placements out.  Where else would be cool do you reckon? 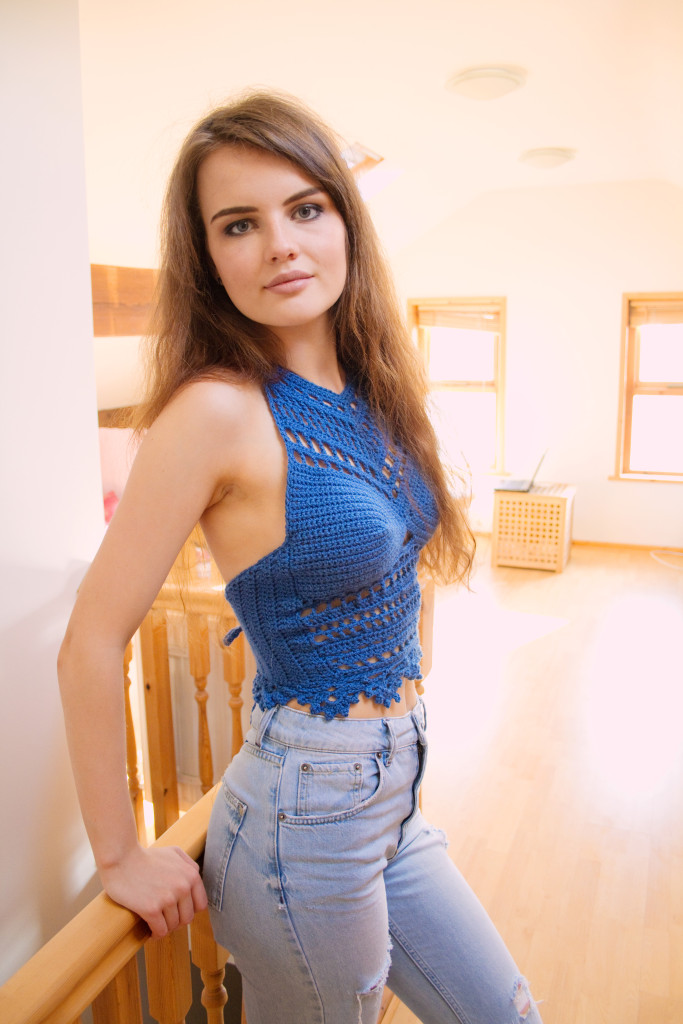 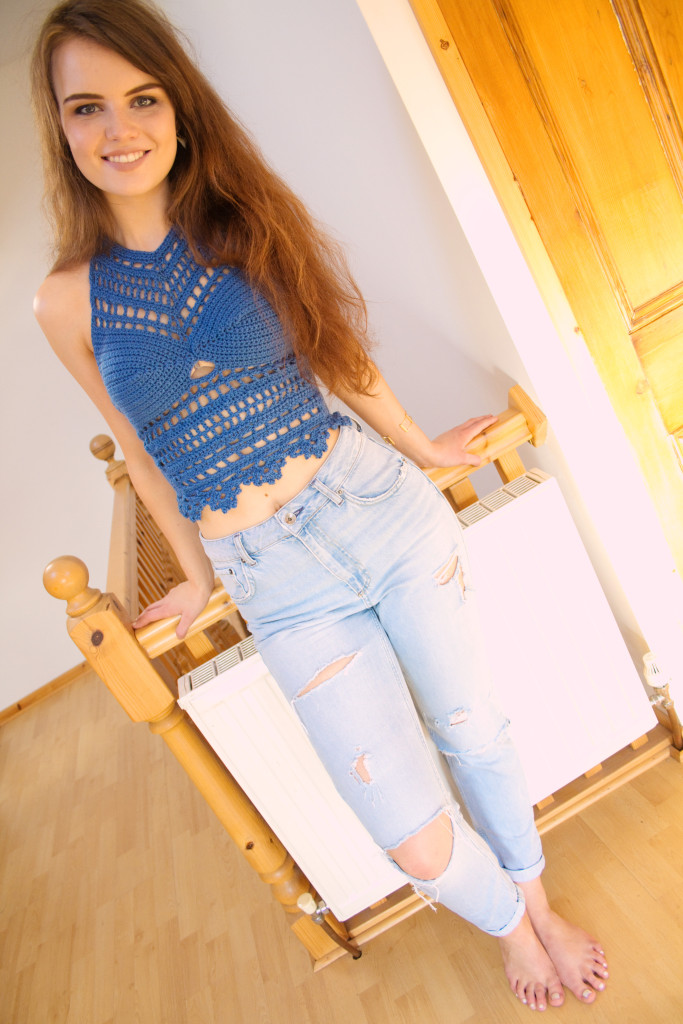 Took a pair of scissors and a cheese grater to these jeans, seeing as I wasn’t a fan of how they looked anymore.  They’re Topshop’s Mom Jeans style that I really liked at first, then the knees went saggy and they looked kinda ‘blah’.  Liking them again now though.  One thing I learnt for next time – don’t bother wasting time cutting with scissors and fraying with tweezers on the knees.  Cut a little slit roundabout the kneecap, pop them on, and squat!  That didn’t occur to imbecile me until afterwards when I bent down and felt the rip right across.  Oh and mum wasn’t too happy when she realised I’d used her microplane graters to roughen the pockets up, thinking they were normal graters.  So now I’ve apparently blunted them, oops.  I’m tempted to slash up another couple of pairs of jeans that have seen better days too, neat jeans seem kinda boring now! 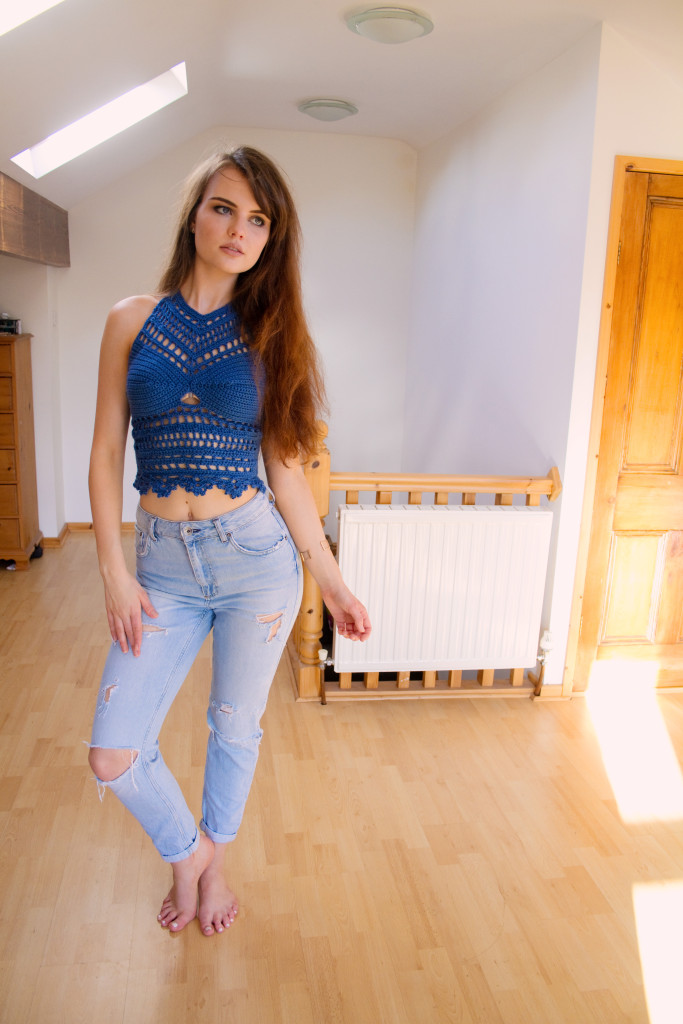 Kindly ignore my frizzball of hair btw!  I left it to dry naturally then brushed it – stupid idea.  -.- 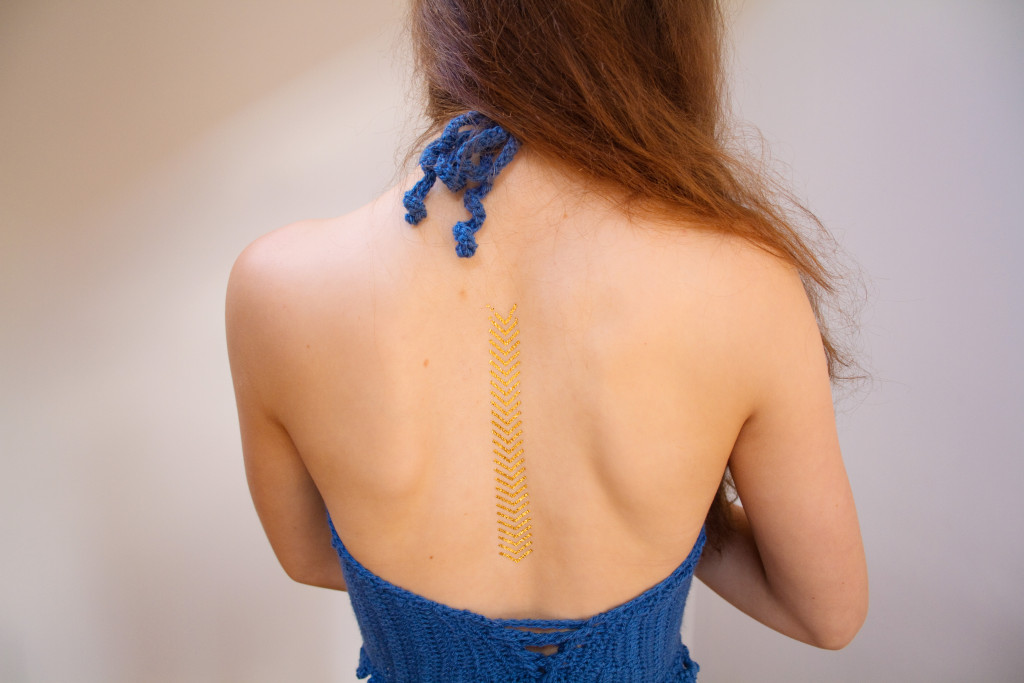 Should probably sign off now seeing as it’s gone midnight and I’ve booked myself onto 7am spinning class tomorrow!  Yes, I am a crazy person, I know.  My body clock would probably have me awake anyway; I can’t sleep for longer than 6 hours or so for some reason.  I’ll be out like a light from the second my head hits the pillow though. Nightynight. 🙂