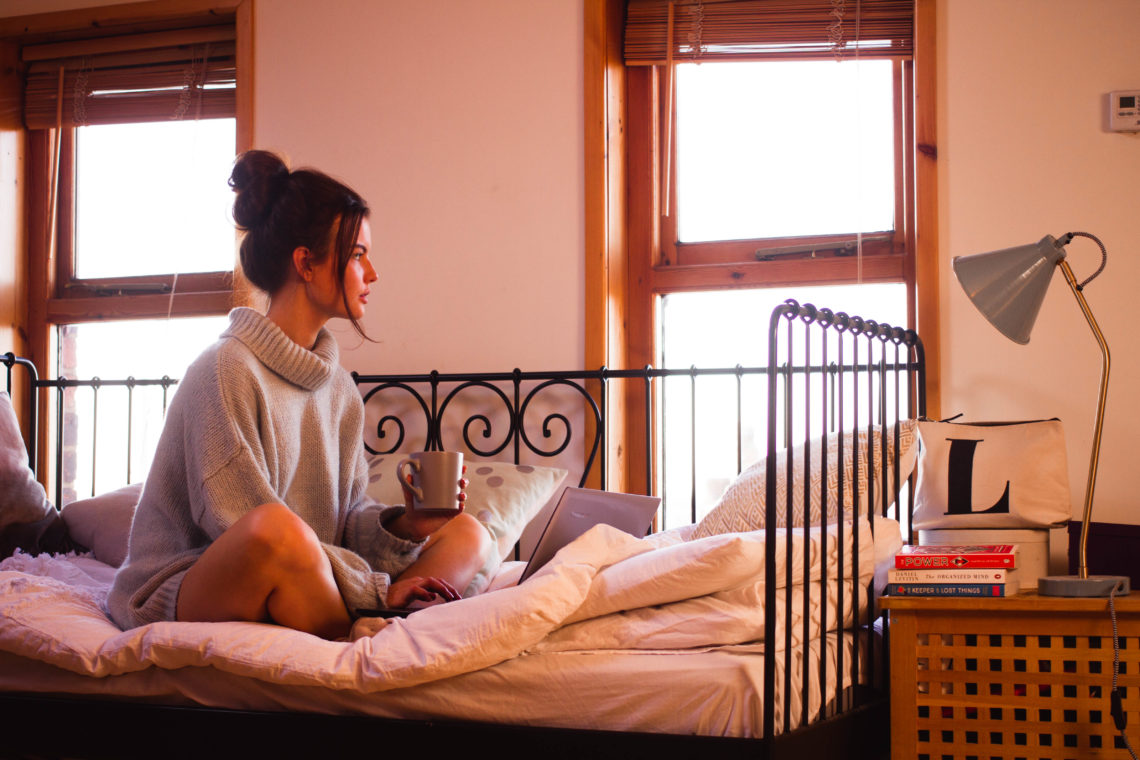 Hands down my worst habit is scrolling through my phone.  I’m sure many of you can relate.

We’re full blown addicted to scrolling and we can’t help it.  Bad that, isn’t it?

Because we’re not sitting there staring into space metaphorically twiddling our thumbs, we don’t realise that we’re just bored.  Instead, we’re literally twiddling our thumbs, scrolling through screen after screen looking for… what exactly?  Inspiration?  Interesting reads?  Entertainment?  Sometimes, maybe even most of the time, but often we’re just scrolling midlessly achieving absolutely nada.  We scroll and browse and fall 23 weeks deep into an Insta stalk of our friend’s sister’s ex boyfriend, who’s now with another girl, and oops better not accidentally like a pic from last year because there’s no way I can blame that on a shitty algorithm.  Sound familiar?  It’s a habit that we as a society have collectively formed; staring at a 5.4 by 2.6 inch screen is our default when there’s nothing else obvious to do.  That itself would be bad enough, but I know I’m not alone in getting distracted by my phone when there are 26 things I need to do.  And yet somehow, being up to date with the social media goings on seems temporarily more important.   Why oh why.

Certain occasions highlight just how ridiculous it is; a mental photograph I took the other day actually spurred me into writing this post.  As I walked out of Manchester Oxford Road train station, a fairly sizeable group of people were waiting on the roundabout outside, I presume for taxis, buses, etc.  Different ages, genders, ethnicities, clothing style – just your average mix of people heading into a city centre at 8:30 on a Tuesday morning.  Despite their differences, every. single. person. was facing the same way, in silence, with the same blank expression on their face, looking down at their phone in one hand with the other tucked in a pocket to keep warm.  They looked like robots awaiting an instruction to set off on a synchronised march, seriously.  Almost comical and almost scary in their uniformity.  Ridiculous as it looked, I’d have probably done the same if I’d been waiting there too.  I mean, who wants to cause a fuss and fuck the system at that time in a morning, right?  Does make you wonder what the hell we’ve become that this is our default stance, rather than actually maybe talking to each other or – shock horror – just watching the world go by.  Our phones are our comfort blanket to escape the awkward feeling of doing nothing.

I know that I’m as guilty of this as the next person.  Sometimes I do strike up conversations with strangers on public transport or whilst waiting around, and I can honestly say that some of the most interesting conversations I’ve had were with people I’d never met and likely will never meet again.  But sometimes I’ll flick through Twitter instead of exchanging even a few words with the person next to me.  Or sometimes I’ll just sleep.  A friend told me the other day that he’d deleted Instagram and Facebook from his phone to try to kick the habit, but hadn’t yet weaned himself from Twitter.  Just goes to show how much of a real struggle this is for us. 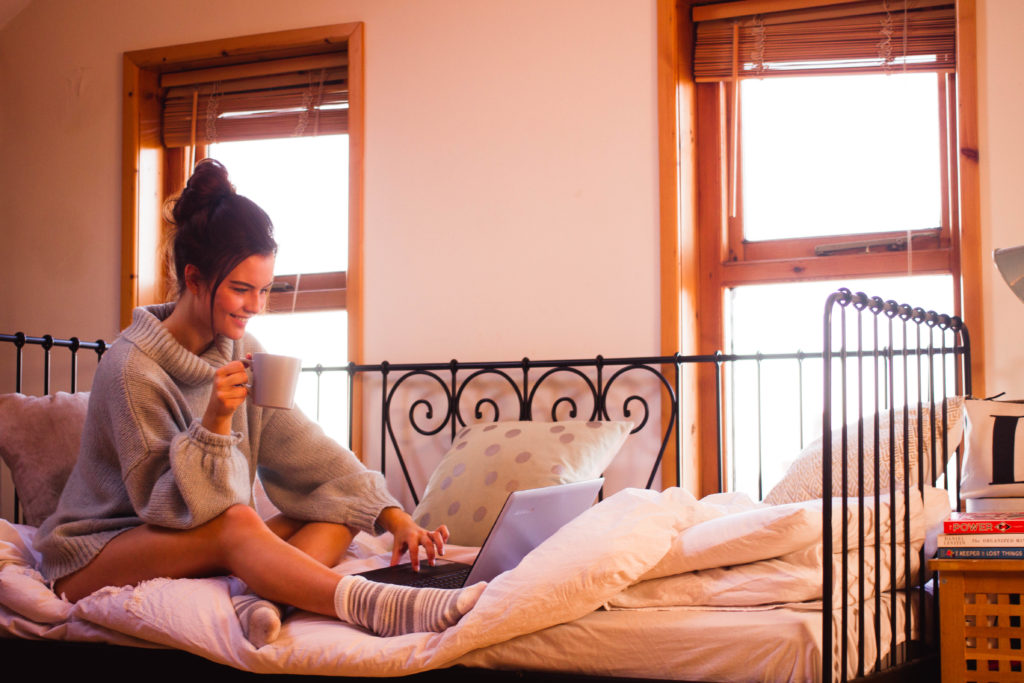 The thing is though, our phones are bloody fantastic.  They open so many opportunities, both for blogging and general life.  They bring people into our lives who we would never have met – #TinderWedding is a thing for Christ’s sake – and I think I speak for the masses in saying that I met some of the best people in my life online.  I’m also forever indebted to Google Maps for getting me from A to B, and the Trainline app for saving my ass when I miss the train I was supposed to catch and need plan B pronto.  I’m insanely grateful for the fact that it’s allowed me to meet so many people, but also HATE how I feel like I ~need~ to be up to date with things that I really don’t.  Features like Instagram stories make us feel like we need to be keeping an eye on what others are up to all the time, and as a result we’re spending less time living our own lives, and more time watching snippets of others’.

I’ll pick up my phone to check the time, and then begins the cycle of ‘Ohh what’s that notification and ahh she replied to me and oh yeah I should probably check my email too whilst I’m at it’.  There goes 10 minutes down the drain.  That damn little screen is such a massive productivity suck, because it’s so bloody tempting to flick between doing 20 things at once instead of just concentrating on the task (or relaxation, ie. lack of task) at hand.  Our phones have too many apps open, and our brains have too many tabs open, and what was it I was doing again?  Oh yes, getting distracted from writing a blog post about being distracted.  Oh the irony.

I also hate the thought of being judged by older people as one of those phone obsessed youths who doesn’t speak to anyone or see the world around them.  For that reason I sometimes make a point of putting my phone away, almost out of embarrassment for belonging to this technology addicted generation.  But then I’m also so proud of what we can do with it too – you see my internal struggle here?

The obvious answer would be to leave my phone in a different room or zipped away in my bag more often, but there are a bunch of reasons why I don’t want to, besides feeling kinda naked without it.  I, just like many of you I’m sure, could get a text or a call at any time saying that I need to work tomorrow or something has come up for next week.  We use our phones for work in one way or another.  Also, a daily digital detox might be alright if you spend day in day out with people, have a bunch of friends just down the road to see all the time, and will be cosied up to your bf/gf on the sofa at night anyway, but for those of us who don’t, it’s not so fab.  I don’t want to miss out on chatting to my friends, or getting to know the cool guy I’ve been speaking to.  I want to reply to exciting opportunities as soon as they land in my inbox so they know I’m keen and don’t choose someone else.  I want to watch the Twitter drama as it unfolds, not be left trying to figure out what the kickoff was about 10 hours later.  We rely on our phones for a good chunk of our social interaction these days – that’s just the way it is – so there’s no point saying just ditch it.  Find a better balance?  Absolutely.  But going cold turkey isn’t going to work.

Exactly how to ditch the habit is a difficult one, just like I’m sure it’s a battle to quit smoking or whatever your vice may be.  You’re probably reading this because you came across my blog whilst mindlessly scrolling, and the irony isn’t lost on me – us bloggers rely on catching the attention of someone looking for a quick flick, no doubt about that.  So do I have an answer to this ‘problem’ if we’re gonna call it that?  ‘Fraid not.  Keep posting photos,  reading random interesting things and replying to chatty internet folk.  But for the love of god, just quit whiling away hours in an Instagram shaped hole.  Who’s with me?